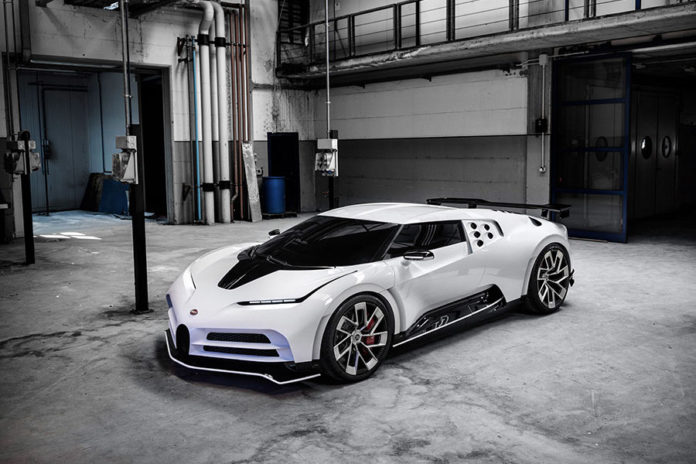 Exceptional design and vast power have been the hallmark features of Bugatti vehicles for around 110 years. The French manufacturer of hyper sports cars now consistently pursues this path further with the new special-edition Centodieci. In addition, Bugatti is echoing its recent history with an exclusive and extraordinary small series. 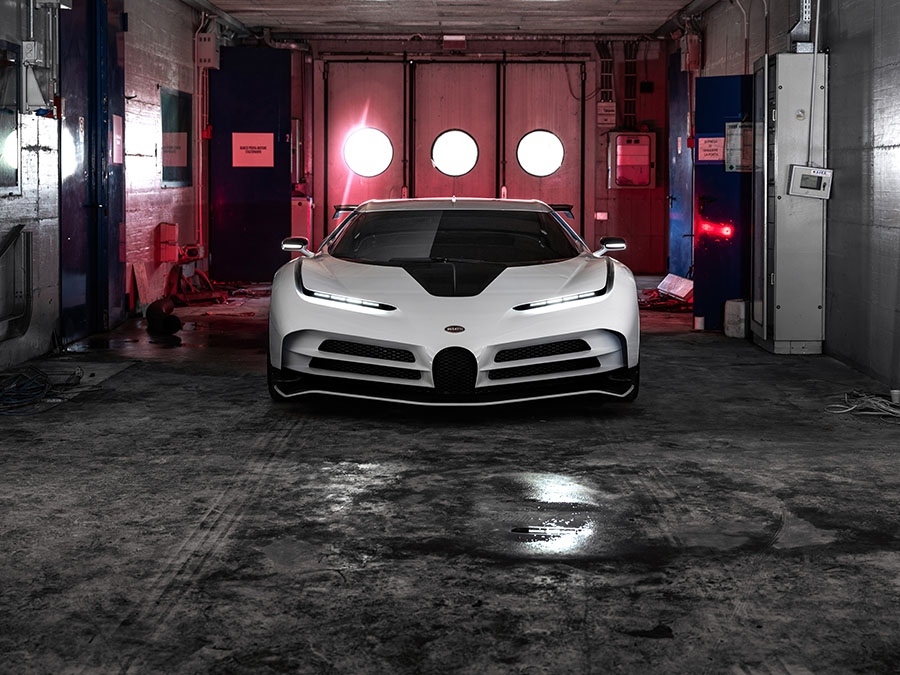 “With the Centodieci, we pay homage to the EB110 super sports car which was built in the 1990s and is very much a part of our tradition-steeped history,” says Stephan Winkelmann, President of Bugatti. “With the EB110, Bugatti catapulted itself to the top of the automotive world once again after 1956 with a new model.” It was a crucial interim step for the production facility that was newly founded in Molsheim in 1998, taking Bugatti back to its roots in France, and the first hyper sports car of modern times – the Veyron. 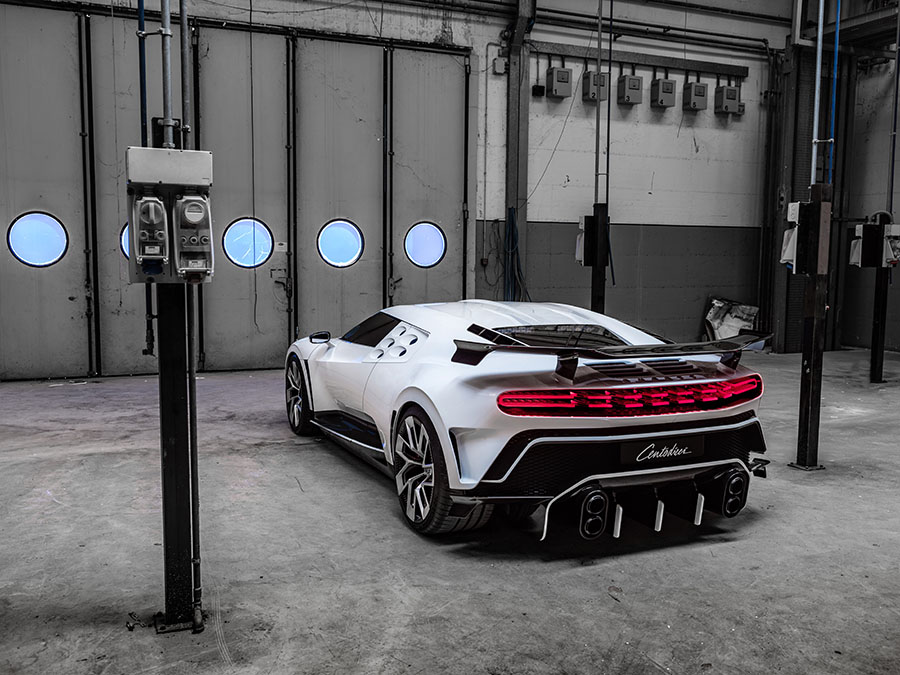 “We are proud of our long Bugatti history, of which the EB110 is very much a part. That’s why we’re celebrating a reinterpretation of this extraordinary vehicle with the Centodieci – Italian for 110,” says Stephan Winkelmann. The EB110 was built in Campogalliano, Italy, but from the very outset it never denied its French influences. Former owner Romano Artioli opened the factory on Ettore Bugatti’s 109th birthday – 15 September 1990. Artioli made a deliberate choice in opting for Campogalliano, a small town in Emilia Romagna. The location had a key advantage in the 1990s: it was in the catchment area of several Italian sports car brands, so Artioli was easily able to recruit experienced employees for his project. Artioli presented the super sports car EB110 to the public on Ettore Bugatti’s 110th birthday – hence the type designation: EB for Ettore Bugatti, 110 for his 110th birthday. 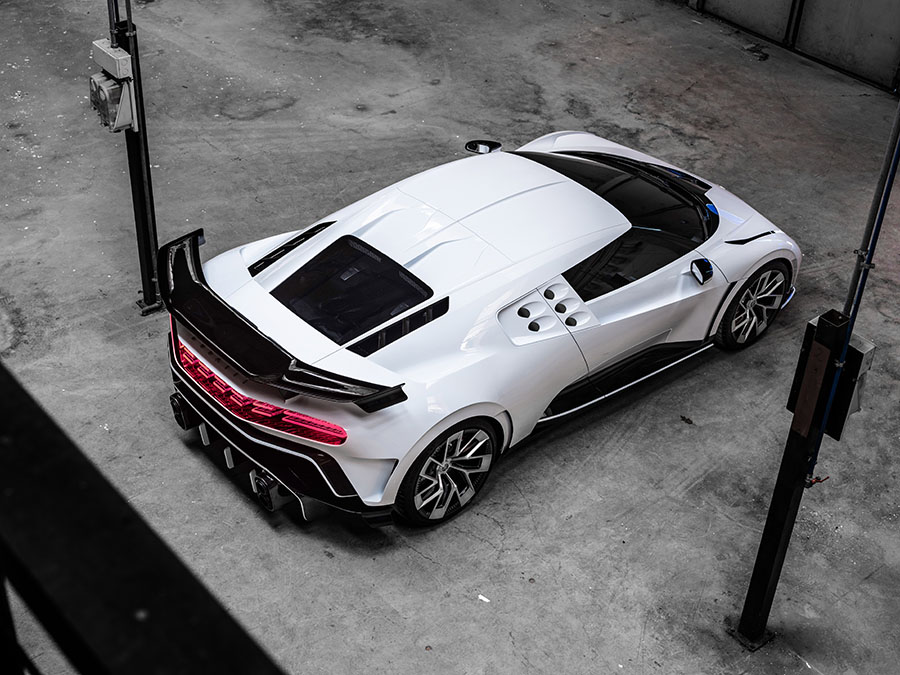 There are many areas in which the new special-edition Bugatti Centodieci echoes the former super sports car of the 1990s. “The challenge was not to allow oneself to be captivated too much by the design of the historic vehicle and work solely in retrospect, but instead to create a modern interpretation of the shape and technology of that time,” says Achim Anscheidt, Head Designer at Bugatti. Even sportier and more extreme than the Bugatti Chiron and Divo hyper sports cars, yet elegant and timeless like the La Voiture Noire, it is a one-of-a-kind Bugatti for the enthusiast. 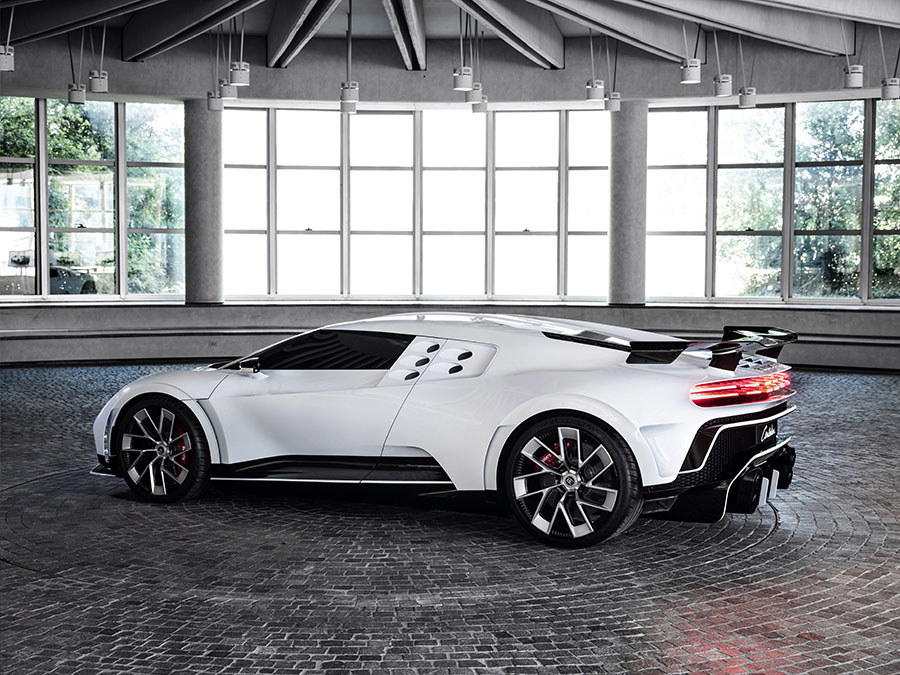 “We faced a number of technical challenges in terms of the development and design of the Centodieci,” says Achim Anscheidt. The EB110 is a very flat, wedge-shaped and graphically quasi two-dimensional super sports car of the late 1980s. “Transporting this classic look into the new millennium without copying it was technically complex, to say the least. We had to create a new way of combining the complex aerothermal requirements of the underlying Chiron technology with a completely different aesthetic appearance.” 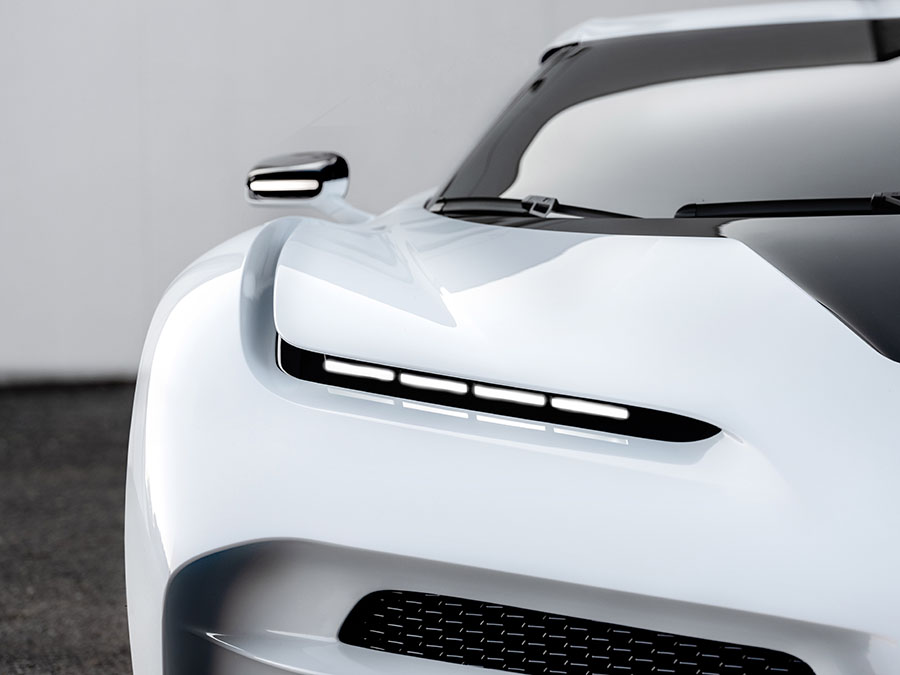 The flat, horseshoe-shaped radiator at the front reveals its depth only from the side view, with the newly developed, deep-seated front spoiler and the three-section air intakes providing a perfect match. The front of the Centodieci drops very low. The iconic Bugatti horseshoe has been reduced accordingly, while the Bugatti logo Macaron sits on the hood, which is interrupted at the centre by a black element. “This allowed us to rekindle memories of EB110,” says Achim Anscheidt. The optimised front section with the extended front splitter and the airflow through the hood further improve the car’s aerodynamics. 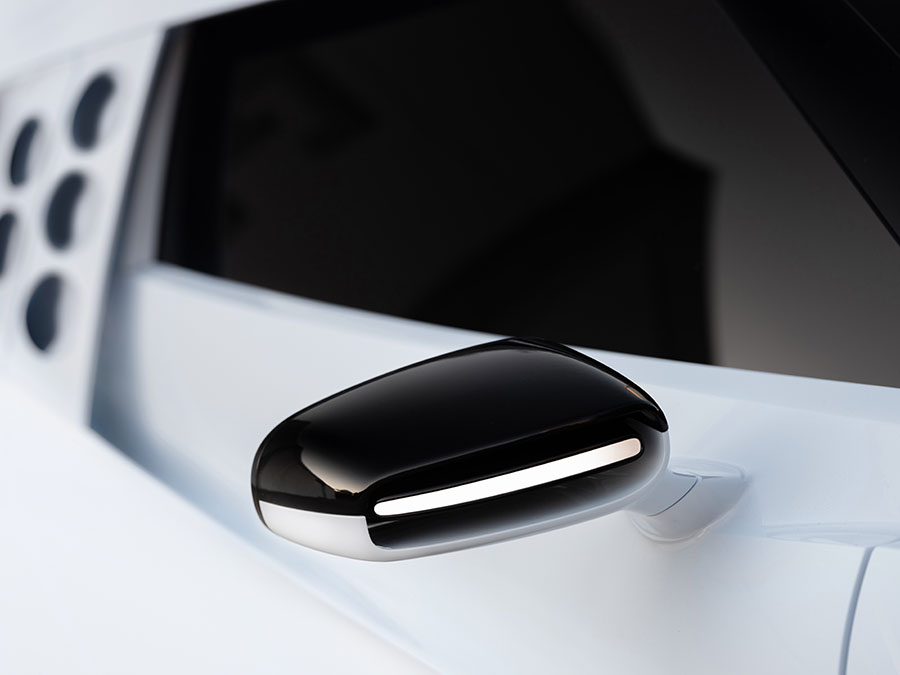 The front is subordinated to the generally low geometry of the vehicle, despite its original, predominant cooling surface. The newly developed, complex and very narrow headlamps with integrated LED daytime running lights provide the perfect match. Thanks to the newly developed lighting elements, we were stylistically free in the front and rear sections to pay respectful homage to the EB110 while at the same time transposing this appealing visual reminiscence into modern technology,” says Achim Anscheidt. 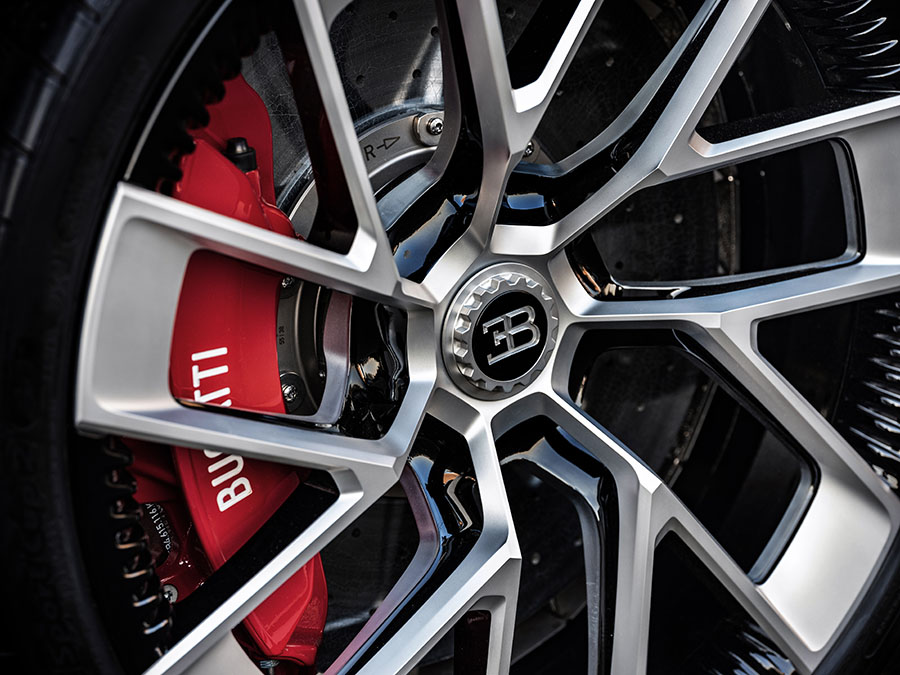 “We incorporated the wedge-shaped design in the development process but we took it in a new direction,” says the designer. Instead of copying the classic Italian wedge in which the muscle runs from the rear to the front wheel, suggesting a dynamic leap forward, Bugatti strikes out on a new path in the Centodieci. The otherwise dominant Bugatti line, the C line on the B pillar, gives way to a new design Significantly smaller than the Chiron, five round air inserts – positioned in the form of a diamond – ensure sufficient air intake for the iconic 16-cylinder engine. In this way, Bugatti has brought forward the visually leaping wedge of the EB110 SS into a new millennium. 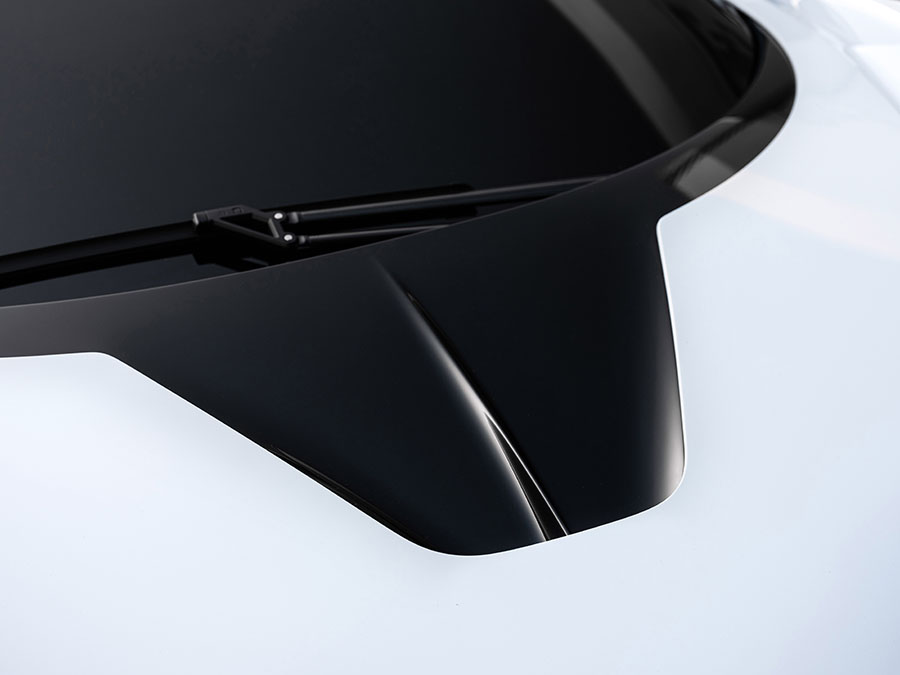 Instead of the graphic two-dimensional rear of the EB110 with its two pill-shaped tail lights, the Centodieci relies on a wide air outlet opening for more efficient engine thermals, bringing to life the flying tail light elements in graphic kinship with the EB110. It took several months to develop solutions to ensure a balanced temperature. As in the EB110, the engine is seen behind a transparent glass surface. The rear is formed into a single ventilation hole, characterised by the eight rear light elements, 2+2 exhaust tailpipes positioned on top of each other in a black matt anodised finish and a performance diffuser to improve downforce. The overhanging rear wing is permanently attached in the style of the original EB110 SS. This increases the downforce. Downforce is supported by the aerodynamic tailgate and a laminar flow-optimised rear window. 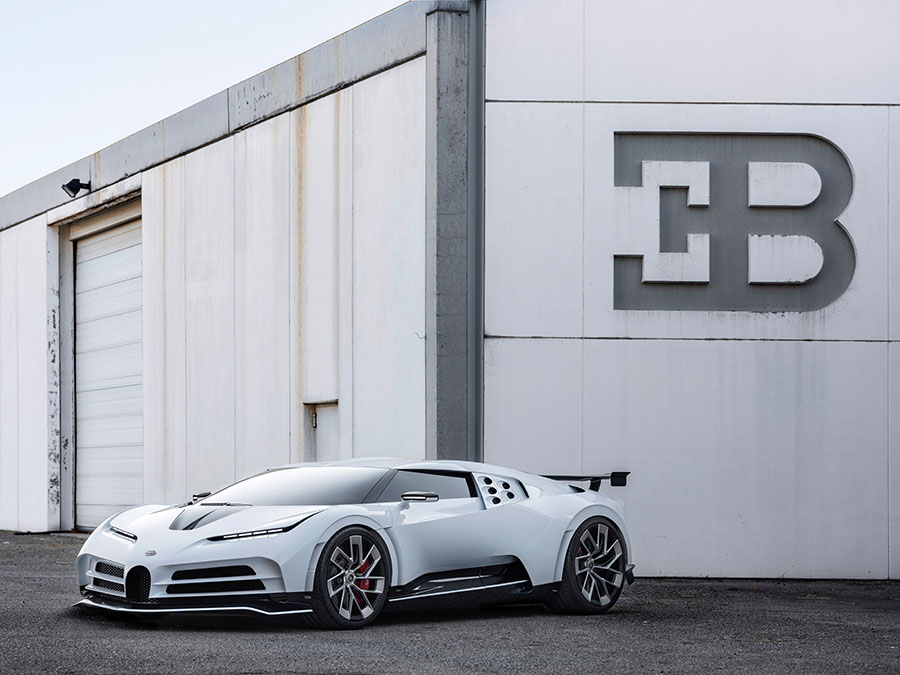 Instead of the V12, the Centodieci features the iconic 8.0-litre W16 engine with 1,176 kW/1,600 hp at 7,000 rpm. An additional air inlet in the area of the oil cooler reliably regulates the temperature of the performance-enhanced engine. The Centodieci sprints from 0 to 100 km/h in 2.4 seconds, to 200 km/h in 6.1 seconds and to 300 km/h in 13.1 seconds; the top speed is electronically cut off at 380 km/h. “It’s not just the top speed that makes a hyper sports car. With the Centodieci, we once again demonstrate that design, quality and performance are just as important,” says Stephan Winkelmann. Compared to the Chiron, the Centodieci saves 20 kilograms of unladen weight. Among other things, a lightweight windscreen wiper and stabilisers made of carbon are used. This enables a sensational power-to-weight ratio of just 1.13 kilograms per horsepower. “The increased power and lower weight further improve performance – for even better acceleration at high speeds. The Centodieci offers our customers an improved power-to-weight ratio and even more dynamic handling,” says Stephan Winkelmann. 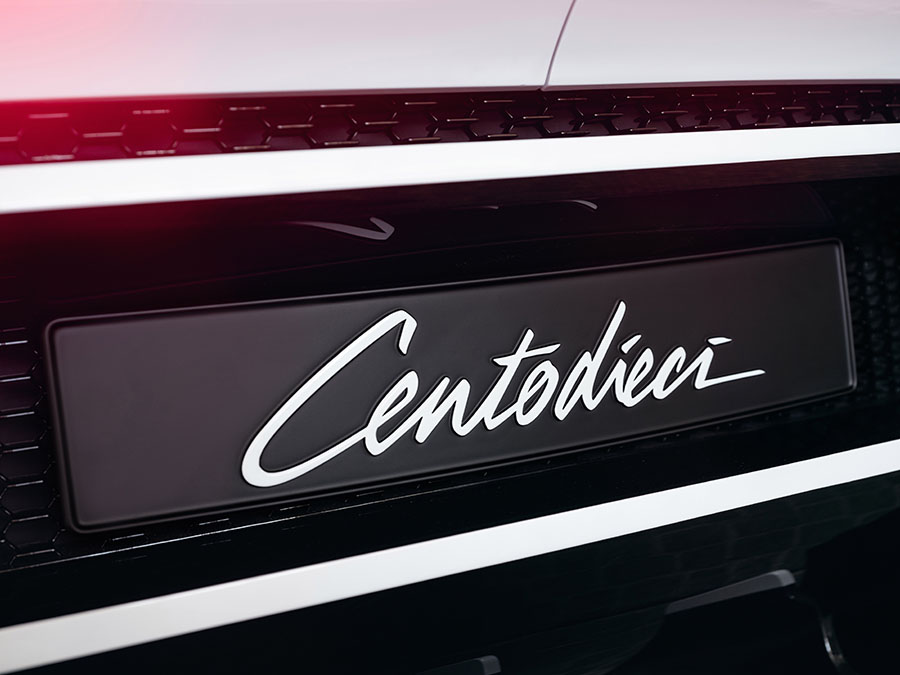 The new paint tone matches this. “With the communication paint finish in white, we’re demonstrating a powerful contrast with the La Voiture Noire – the black car just presented in March: two completely opposing yet related forces, like yin and yang,” says Stephan Winkelmann. He says that this was what continues to set Bugatti apart after 110 years.

Naturally, customers can have their special-edition Centodieci  painted in the Bugatti colour of their choice. The small series, limited to ten vehicles (and already sold out) and handcrafted in Molsheim, France, will be delivered in two years at unit prices starting at EUR 8 million plus VAT. After its short period in Italy, Bugatti has now been back at its old headquarters in Molsheim, France, for almost 20 years. This is where Ettore Bugatti produced the very first vehicles that bore his name at the end of 1909.