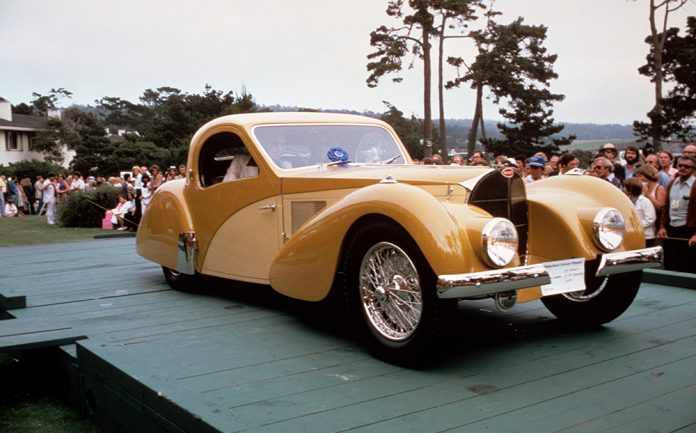 A Bugatti model was present at the first ever Pebble Beach Concours d’Elegance in Monterey, California, in 1950, and the iconic french luxury brand holds a record nine ‘Best of Shows’ awards.

On Sunday 15th August, the Pebble Beach Concours d’Elegance will mark its 70th anniversary. Bugatti will celebrate its involvement from the very beginning with what is seen by many as the world’s premier celebration of the automobile. The event was first held in 1950 when the cars were driven on a parade lap of the Pebble Beach Road Race course. One of the star cars of that initial event was a 1938 Bugatti Type 57 Coupe de Ville entered by John Edgar.

“In the early years, collector cars weren’t particularly appreciated or encouraged to attend, with the emphasis placed primarily on new models,” explains Pebble Beach Concours d’Elegance Chairman Sandra Button. “Things began to change in the mid-50s, when the organizers began to present their top award to classic models as opposed to new cars.”

First of nine ‘Best in Show’ accolades for Bugatti

With the cars displayed on the 18th fairway of Pebble Beach Golf Links and the glistening Carmel Bay providing a stunning backdrop, the first outright win for the French luxury marque came in 1956. That year, the Type 37 Grand Prix car of Doctor Milton R. Roth won ‘Best of Show’. Since then, Bugatti models have been present on the 18th fairway at practically every running of the concours. The marque has been awarded the highly coveted ‘Best of Show’ accolade more often than any other manufacturer, with a record nine wins to date.

“The Bugatti brand holds a very special place in the history of Pebble Beach. Our stories are intrinsically linked, and each year Bugatti models grace the fairway, they never fail to captivate and beguile visitors and of course, our judges,” continues Button. “In fact, it is no exaggeration to say that in the Bugatti gathering in 1985 was pivotal in making Pebble Beach the international success it is today.”

The event Button refers to is the breathtaking display of all six Bugatti Type 41 ‘Royales’ at Pebble Beach in 1985 – the only time these iconic cars ever appeared together, before or since. Produced between 1926 and 1933, the Royale was a car the like of which the world had never seen. The greatest luxury automobile – a car for aristocrats and royals was how company founder Ettore Bugatti envisaged the 6.4-metre, 12.8-litre in-line eight-cylinder powered Type 41. Technically and stylistically, the opulently equipped Royale exceeded its brief with consummate ease. But unfortunately, its timing coincided with a significant global economic downturn, and as a result, just six production models were built.

The highly ambitious idea of assembling all six Bugatti Royales in one place was first proposed by Chris Bock, then a member of the concours field crew and today the chief judge of the event. It was a fiendishly complicated logistical task that even involved the granting of diplomatic immunity to two of the cars by the US Government, a status usually reserved for individuals, occasionally bestowed on objects of art but never an automobile before.

“Four of the Bugatti Royales were in the US already, and the remaining two were in France,” recalls Bock. “They had been part of the Schlumpf brothers’ car collection in Mulhouse, which had been taken over by the French Government and placed under the care of the French National Automobile Museum Association. But the museum was worried that if the cars left French soil, the Schlumpf brothers might attempt a legal move to seize the cars back.”

Even with diplomatic immunity granted, there were still significant hurdles to overcome. The typical cargo flight from France refueled in Canada, which the US grant of diplomatic immunity would not have covered, so special flights had to be arranged with Air France from Paris direct to Los Angeles. The French museum stipulated that each car be transported on a separate aircraft and then on a different truck to minimize risk. The transport cost around €85,000 in 1985, which was paid for by car collectors, judges, officials, and friends of the concours, such was the enthusiasm to see the legendary Bugatti models at Pebble Beach.

Two other Royales came from the William F. Harrah collection in Reno and a fifth from the Henry Ford Museum in Dearborn in Michigan. “That car has been donated to the museum by a former GM executive, Charles Chayne,” explains Bock. “Chayne came across the car in a junkyard in Long Island, where it had ended up after a cold New York winter cracked the engine block, and bought it for a few hundred dollars.”

“The concours is a complicated show to put on because it’s essentially on a golf course sitting in a residential neighborhood. We had put a lot of care into arranging storage for the Royales in the garages of private homes adjacent to the lodge. Then a guy arrived with the sixth Royale, which belonged to Briggs Cunningham. He’d towed it on an open trailer with a Ford F250 pick-up truck. He said: ‘Oh, it’ll be fine, we’ll just throw a tarp over it,’ while everyone else was running around hyperventilating.”

Enthusiasts travelled from all over the globe to see the six Royales at Pebble Beach. The lawn where the cars were displayed, which is now the event’s concept car lawn, was constantly mobbed with spectators, Bock recalls. “There was just a throng of people around those cars. It was mobbed, and it stayed that way all day long. It was just a huge turning point for the event. It put Pebble Beach on the map with the international automotive press and car collectors all around the globe, plus it spawned the Pebble Beach Automotive Week.”

Bugatti models provided many more spell-binding moments at Pebble Beach over the years, including Ralph Lauren winning ‘Best of Show’ with his Type 57SC Atlantic in 1990. In 2003 Ralph Lauren’s car was reunited with the similar Type 57SC from the Mullin Collection. In 2019, all four Bugatti Type 59 Grand Prix cars were brought together for the first time since 1934.

A spectacle to behold

The 70th running of the Concours will feature a special exhibition of Best of Show Winners, including several Bugattis, many of which are in contention to collect awards.

Summoning up the luxury French marque’s appeal, Chris Bock says: “Bugatti automobiles are such a perfect blend of engineering, style and rarity. Every mechanical component is created with a designer’s eye as well as an engineer’s eye. They really are works of art.”

Bugatti, as a modern company, has also enjoyed a highly successful relationship with the Pebble Beach Concours. President of Bugatti Automobiles Stephan Winkelmann and Bugatti Design Director Achim Anscheidt have served on the judging panel on several occasions. The company has also chosen the exclusive venue to present contemporary models to customers, selected guests, and the world’s press.

The Bugatti Veyron 16.4 Grand Sport celebrated its world premiere at Pebble Beach on the eve of the Concours d’Elegance in 2008. The car was sold at the Pebble Beach Auction presented by Gooding & Company. It achieved a price of $2.9 million (before buyer’s premium), bringing in $900,000 over the car’s retail price, all of which Bugatti donated to the Pebble Beach Company Foundation charity, which has raised around €30 million for charities over the years. More recently, in 2019, Bugatti showcased the Centodieci1 special edition at Monterey Car Week, an extraordinarily created homage to the legendary Bugatti EB110.

“Enthusiasts regard the Pebble Beach Concours d’Elegance as the greatest celebration of the automobile in the world, and rightly so,” states President of Bugatti Automobiles Stephan Winkelmann. “We at Bugatti are immensely proud that our association with the concours reaches back to the very first event in 1950 and tremendously honoured to have been awarded the greatest number of ‘Best in Show’ accolades over the past 70 years. The event always provides the perfect setting for us to engage with our customers and make new friends each year. We look forward to continuing our special relationship with Pebble Beach Concours d’Elegance into the future.”