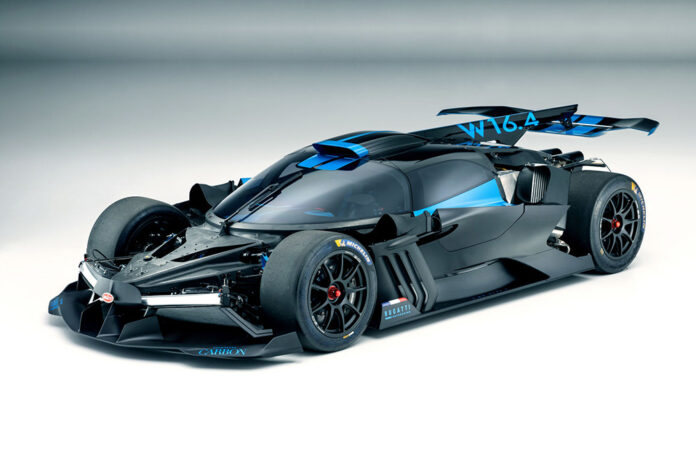 Imagine ultra-lightweight components that are as strong as a reinforced concrete column. Now this is possible, thanks to technology led by innovative Bugatti engineers. The newly developed 3D-printed pushrod – a pressure-loaded coupling rod in the chassis area – weighs just 100 grams and can transmit forces of up to 3.5 tonnes. The hollow titanium structure with internal supporting arch gives incredible strength and is another engineering breakthrough demonstrated by the expertise of Bugatti.

Bugatti is the technological leader in the field of metal 3D printing. Since production began of the Chiron, the hyper sports car has been fitted with the industry’s first series-produced metal 3D-printed functional component: a small, water-carrying high-pressure pump console next to the transmission fluid reservoir. In 2018, the world’s largest 3D-printed titanium component, a titanium brake calliper, was presented by Bugatti. This was followed by the world’s largest hybrid functional assembly made of 3D-printed titanium and coiled carbon. “These components are extremely lightweight, robust and durable, and therefore absolutely suitable for use in production vehicles,” says Frank Götzke, Head of New Technologies at Bugatti.

The new materials and manufacturing processes are now being used in the Bugatti Bolide technology carrier, which celebrated its world premiere in late October 2020. “As an experimental vehicle in the form of a racing car, the Bolide is no show car; it is an uncompromisingly road-ready extract of Bugatti’s complete technological expertise. Bugatti enthusiasts will also find these cutting-edge technologies in other vehicles in the future,” says Frank Götzke.

Just like the turbofans typically used in motorsport, Bugatti has found a way of including radial compressors on ultra-lightweight magnesium forged wheels. Their appearance is similar to that of a wheel rim, but they perform multiple functions: they pump the air out of the wheel housings through the brakes and draw the warm air to the outside. In this way, the turbofans cool the brakes and minimise lift. In contrast to the well-known monomaterial solutions, the Bolide components have a hybrid structure. This consists of a central bowl made of 3D-printed titanium with a thickness of 0.48 millimetres, and a 0.7-millimetre thick carbon plate with small inner blades, also made of carbon. Cross-pieces with a width of 0.48 millimetres further increase the rigidity of the central titanium bowl, which weighs just 100 grams. All of this adds up to a total weight of under 400 grams for an individual 18 ¼-inch turbofan on the rear wheels (17 ¼-inch at the front). This would not be possible with a monomaterial solution due to the fact that it is not possible to achieve the specific buckling resistance and flexural rigidity.

Highly complex components from the 3D printer are also used in hidden places. A mounting bracket for the front wing, on which the front wing can be mounted at three different heights, is printed in titanium by Bugatti. With a hollow interior and a wall thickness of 0.7 millimetres, the mounting bracket can withstand an aerodynamic downforce of up to 800 kilograms – with a weight of just 600 grams. The downforce of the rear wing, which can reach up to 1.8 tonnes at 320 km/h, is introduced via the Bolide’s central carbon fin into the upper structural matrix, which forms the upper termination of the high-strength stainless steel rear frame. Inside this central fin there is a laminated and printed titanium component for connecting the fin to the wing, for which the angle can be adjusted by means of a coupling rod. Despite its rigidity, it weighs just 325 grams. The engineers also use titanium to print the bracket for mounting the steering column, which features an integrated dashboard support, the support collar for the steering column throughfeed, and the two air vents in the vehicle interior. All components are designed as lightweight hollow structures, with a uniform wall thickness of 0.5 millimetres.

The Bolide features wheel control based on double wishbone kinematics on both the front and rear axles. On the rear axle, the spring damper elements have a vertical configuration, while on the front axle they are arranged horizontally at right angles to the direction of travel. The springs are made of titanium, and the dampers feature an adjustment mechanism and a reservoir, which is integrated internally on the front axle dampers. In the case of the horizontal spring damper elements on the front axle, the vertical contact forces are transmitted by means of a linkage located directly beside the swivel bearings on the lower wishbones via pushrods and rockers. The brackets that control the rockers have a wall thickness of just 0.4 millimetres and weigh only 95 grams each. The rockers weigh just under 195 grams each. Since air flows completely through the Bolide’s front axle, its kinematic components – both the 3D-printed titanium components and the high-strength stainless steel wishbones – are extremely lightweight, rigid and aerodynamically optimised. The tensile strength of this and all other 3D-printed elements is 1,250 N/mm. “Using a special heat treatment process developed in-house, we achieve this high tensile strength with a simultaneously high fracture strain of at least 19 percent,” explains Götzke.

The developers are particularly proud of the pushrods in the Bolide. “They transfer a force into the rockers which, depending on the driving manoeuvre, is equivalent to a weight of up to 3.5 tonnes. Nevertheless, thanks to the implementation of multiple ideas, they only weigh as much as a bar of chocolate, in other words 100 grams each,” explains Henrik Hoppe. For the first time, the Bugatti developers varied the wall thickness of the thin-walled, hollow rods. They become thicker towards the centre and then thinner again, meaning that they are optimally adapted to localised stress. Similar to a human bone, the component has an internal structure. This special structure was also recently registered as a patent.

In the tailpipe trim cover, a hybrid component made of 3D-printed titanium and ceramic, Bugatti reduced the weight by around half compared to the already weight-optimised titanium tailpipe trim covers well known from series production. The component, which measures more than 280 millimetres in length and has a consistent wall thickness of just 0.5 millimetres, therefore weighs less than 750 grams. Since ceramic material is a significantly less effective heat conductor than titanium, Bugatti introduced special ceramic elements that are built into the titanium housing and centre the cover with respect to the carbon outer skin, so that the outer skin is not damaged even at high exhaust gas temperatures. This thermal shield is also supported by a built-in Venturi nozzle: when hot exhaust gas enters the tailpipe trim cover, fresh air is drawn in, thereby creating a jacket of cool air around the hot exhaust gas flow. In its entirety, this is an invention for which Bugatti has submitted a patent application.

Lightweight components found in the Bolide

With the launch of the Bolide – the track-oriented hyper sports car – a few months ago, Bugatti presented an extraordinary technological concept. The iconic 8.0-litre W16 engine, with up to 1,850 PS, powers a car weighing just 1,240 kilograms. This equates to an incredible weight-to-power ratio of 0.67 kg/PS, a top speed of over 500 km/h, perfect handling and maximum agility. “It is the Bolide’s many technological highlights that make it so special. But these can also be transferred to production vehicles. This is what we are continuing to develop and work on, because Bugatti has set itself apart with its impressive innovations for over 110 years – and will continue to do so in the future,” says Frank Götzke.

Lexus Reveals Gamers’ IS – First Vehicle Designed by a...

Bugatti Paving the Way for Series Production of its Exclusive Centodieci

Over Half of Brits Admit to Getting Frisky in Their Car