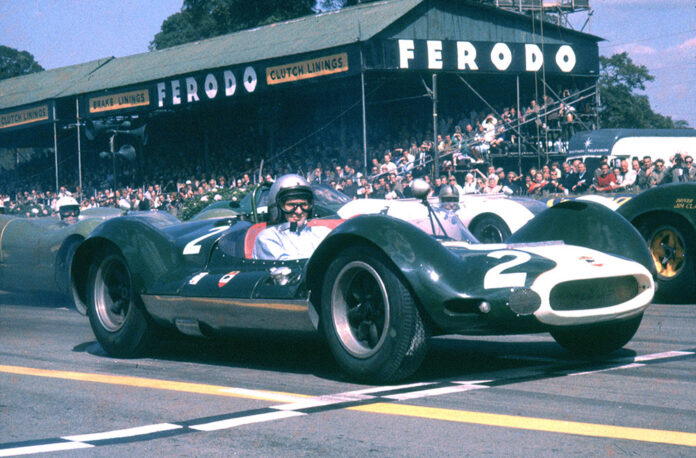 One of motor racing’s most legendary classic sports-racing cars, Bruce McLaren’s 1964 Cooper-Zerex-Oldsmobile ‘Jolly Green Giant’ – which became something of a long-lost ‘Holy Grail’ – has been unearthed and returned to British soil for the first time in 57 years.

The very first sports car to carry the Kiwi team badge of the late Grand Prix and Le Mans-winning driver and constructor, Bruce McLaren, has been unveiled at the Bonhams Festival of Speed Sale at Goodwood, where it is to be offered for sale later in the year, in the auction house’s Goodwood Revival Sale on 17 September (refer to department for estimate).

Regarded as the taproot­­ of the entire modern McLaren marque, this famous machine achieved top level success in the hands of a trio of mid-century motor sport legends: not only Bruce McLaren but also Roger Penske and, previously, Briggs Cunningham’s team driver Walt Hansgen.

Not only did the Cooper-Zerex-Oldsmobile have three celebrated owners but it also had several different guises, being continually adapted – from Formula 1 single-seater to three different sports car forms – to match developing race regulations for three full seasons from 1962 – 1964, earning it the reputation as ‘The Great Transformer’. In the hands of Bruce McLaren, the then conventional sports car had its chassis modified and painted a rather untraditional ‘garden gate’ green – the only colour available during rushed re-completion – earning its nickname, while its on-track victories and earned it widespread admiration.

Having effectively vanished in the late 1960s, this treasure was found in a dormant, dismantled state, buried away in an obscure South American storage, some fifty years later. Following a six-week voyage via the USA and Europe, the Jolly Green Giant arrived on British shores last weekend, before being brought to Goodwood for its first public appearance in more than five decades.

Starting life in 1961 as a 1 ½ -litre Formula 1 Cooper with Coventry Climax engine, the car was entered by America’s most revered team patron, millionaire Briggs Cunningham, for driver Walt Hansgen in the 1961 United States Grand Prix at Watkins Glen.

Following Hansgen’s crash there, the car was sold by Cunningham (for $1,250) to fast-rising American star driver Roger Penske, today the multiple motor racing title winner and billionaire head of the international Penske Corporation. The forward-thinking and ingenious Penske had the Formula 1 car repaired and rebuilt as a lightweight ‘Grand Prix car in sports car clothing’.

Further modifying the car to conventional offset-driving-position sports car form to meet yet more regulation changes, Penske then sold it to young Texan entrant, John Mecom Jr, and drove it for him to win the 1963 races at Marlboro and Cumberland, USA, plus the major international Guards Trophy at Brands Hatch, England.

However, it was in the ownership of Bruce McLaren that the car then cemented its legendary status. The then Cooper Car Company works Formula 1 team leader had long admired this Penske Cooper-Zerex and bought it for 1964. In between Grand Prix races for Cooper, Bruce would campaign it at sports car level under his new personal team ‘McLaren Motor Racing Team’ banner.

Using a similar 2.7-litre 4-cylinder Climax engine to Penske’s, Bruce drove it to victory in British international sports car races at Aintree and Silverstone, before having the car converted to use a 3.5-litre Traco-modified Oldsmobile V8 engine. Upon completion, the modified chassis was hastily finished in the only paint the team could find available on an English Sunday: garden-gate green, earning its soubriquet The Jolly Green Giant.

The Cooper-Zerex-Oldsmobile immediately notched up further race wins in the international Player’s ‘200’ race at Mosport Park, Toronto and, powered by an uprated 3.9-litre Oldsmobile engine, the international Guards Trophy race at Brands Hatch in 1964; the car’s second consecutive victory there after Roger Penske’s the previous year.

Fittingly, Bruce McLaren’s final race appearance in this Cooper-Zerex-Oldsmobile was at Goodwood where he started from pole position in the world-class 1964 RAC Tourist Trophy race, leading World Champion drivers Jim Clark and Graham Hill in their rival Lotus and Ferrari cars and setting the fastest lap before being forced out by clutch failure.

After its replacement in September 1964 by the prototype, entirely McLaren-built, M1 sports car, this Cooper-Zerex-Oldsmobile passed through three subsequent owners before being acquired by the vendor’s father in South America.

It was greeted by Howden Ganley, last survivor of the 1964 Bruce McLaren team, and a successful later Grand Prix, Le Mans and CanAm car racing driver, Doug Nye, Bonhams competition car consultant and author of Cooper Cars, and Allen Brown, Editor, Oldracingcars.com, who witnessed the opening up of the treasure chest containing the once-magnificent sporting gem and examined its contents for authenticity.

Howden Ganley said: “I have always felt privileged to have been Bruce McLaren’s third shop-floor employee. Incredibly, it’s now 58 years since I helped team-mates Tyler Alexander and Wal Willmott work on the Cooper-Zerex-Oldsmobile. Having just examined this chassis frame upon its return to England, for me that is certainly the real car.”

Doug Nye added: “Opening the crate upon the car’s return to English soil, to find this iconic piece of motor racing treasure inside, has been truly memorable. I saw Bruce McLaren’s spectacular Goodwood TT drive in it back in 1964, and now here I am in 2022, handling such a piece of stupendous motor racing archaeology.  For me it’s magical!”

Allen Brown commented: “I have known about this car for many years and to actually see it was just fabulous. It’s great to see cars before they are restored and it was a surprise that this was in such good condition. The climate in South America must be kind to metal as it would have been corroded had it been kept in this country.

The car was exactly as we expected it to look and the parts were exactly where they should be. It’s spot on.”

Mark Osborne, Bonhams Global Director of Motorsport, said: “The unearthing of this automotive treasure from half a world away is our version of Indiana Jones finding the Arc of the Covenant, so great is its multi-tiered motor racing significance.

“Of all its headline-grabbing attributes, its career when driven by two of the most prominent and highly respected giants of the sport – Roger Penske and Bruce McLaren – perhaps speaks loudest. And it was, of course, the first McLaren sports car to carry the famous Michael Turner-designed Kiwi emblem.

“We are justly proud to display the car publicly at The Goodwood Festival of Speed – 58 years after, in Bruce’s hands, it starred in the 1964 Goodwood TT race. To celebrate its homecoming, there could be no more appropriate setting.”