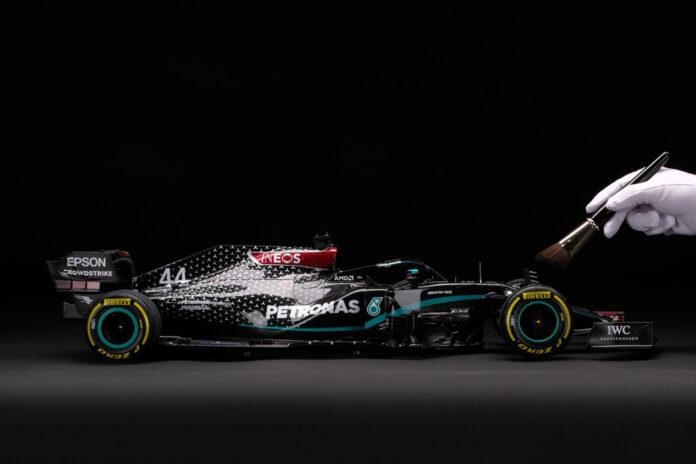 The car in which seven-time World Champion Lewis Hamilton set the fastest pole position lap in Formula 1 history, the Mercedes-AMG F1 W11 EQ Performance was conceived to make history: to lead the team to an unparalleled seventh consecutive FIA Formula One Drivers’ and Constructors’ Championship double. Now, following the creation of the season previous season’s W10 at 1:8 and 1:18 scales, the world’s leading model car creators at Amalgam Collection have announced their latest collection, featuring the record-breaking W11 at 1:4, 1:8 and 1:18 scales, presented alongside a 1:1 scale replica of the car’s steering wheel.

Based on Hamilton’s race winning #44 car at the Formula 1 Heineken Grande Prémio de Portugal 2020 at Autódromo Internacional do Algarve on the 25th of October 2020, the stunning art piece in these images precisely replicates every technical detail of the bodywork and sponsor logo on the striking all-black livery, after Mercedes’ public pledge to improve the diversity of the team following the global movement against racism. The 1:8 scale model’s development took over 2500 hours and only concluded once Mercedes themselves were satisfied with the accuracy of representation. Every subsequent model takes over 250 hours to cast, fit, fettle, paint and assemble. The artisans’ meticulous efforts ensured every minute detail was accurately captured; the finished pieces measure over 62cm long (24 inches). Lewis Hamilton and Valtteri Bottas variants will be available at both the 1:8 and 1:18 scales, whilst devotees to George Russell can commission a bespoke model of the #63 driver’s appearance at the Formula 1 Rolex Sakhir Grand Prix 2020. A colossal 1:4 scale variant is now in development owing to demand from sponsors. It makes a phenomenal display piece at 125cm (49 inches) long. Also in development is the 1:1 scale steering wheel, an exact replica of the one used by the drivers. Every steering wheel will feature working buttons, switches and paddles, developed using the original CAD data supplied directly by the team.

Three years in the making, the W11 was the culmination of efforts started in 2017 to improve Mercedes’ traditional struggles in slow corners. The dominant W10 of 2019 was very balanced in all types of corner on the racetrack, and the W11 was an evolution of the knowledge gained in that title winning season. Hamilton dominated the season, equaling Michael Schumacher’s fifteen-year record when he secured his seventh Drivers’ Championship at the Turkish Grand Prix in Round 14. He would in fact finish 124 points ahead of his teammate Bottas, despite not competing in Sakir, a gap that on its own would have placed Hamilton fifth in the Drivers’ Championship. Overall, the W11 earned 13 wins, 12 further podiums, 15 pole positions and 9 fastest laps from just 17 races, scoring 573 points, and giving the Mercedes-AMG Petronas Formula One Team both the Drivers’ and Constructors’ Championship titles for a record seventh consecutive season.

Every W11 model is hand-built and assembled by small teams of craftspeople across the Bristol-based company’s global workshops in collaboration with the Memento Group and with the assistance of the Mercedes-AMG Petronas Formula One Team, who supplied original CAD designs and paint codes. Every model has undergone detailed scrutiny by the team, features a certificate of its authenticity, and is delivered mounted on a carbon fibre or an acrylic base, with a polished metal plaque, covered by an acrylic dust cover.

The full range of W11 models can be found at www.amalgamcollection.com.

The Sound of Speed: 79th Goodwood Members’ Meeting to Celebrate the V10 Era of F...