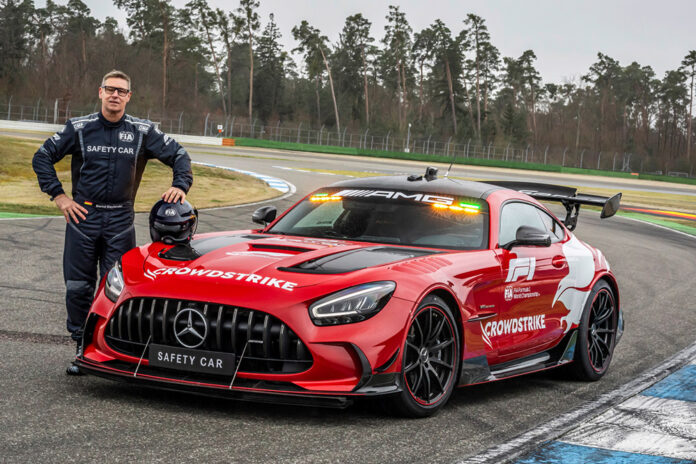 When the season starts on March 18 – 20 with the FORMULA 1 GULF AIR BAHRAIN GRAND PRIX 2022, Mercedes-AMG will be contributing to the excellent safety of the FIA Formula One World ChampionshipTM with two exceptional performance models that have already well and truly proven their racetrack credentials. Appearing for the first time as the Official F1® Safety Car is the Mercedes-AMG GT Black Series, while the Mercedes-AMG GT 63 S 4MATIC+ makes its debut as Official F1® Medical Car. The 2022 season will benefit from the most powerful variants ever of these two vehicles.

“Recent years have seen Mercedes-AMG celebrate a huge number of amazing successes in the FIA Formula One World Championship. Eight constructors’ titles and seven drivers’ titles in the last eight years speak emphatically for themselves. Added to that is the extensive and widespread transfer of technology and image from this greatest of all motorsport stages and our series-production vehicles. Motorsport means so much to us, as does the best possible level of safety. There was absolutely no question that, after more than 25 years, we would extend our commitment as the provider of the safety car and medical car – with two absolutely outstanding vehicles from our line-up”, explains Philipp Schiemer, CEO of Mercedes-AMG GmbH.

“Since 1996 – that’s every single year for more than a quarter of a century – Mercedes-AMG has been supplying the vehicles Formula 1 needs in emergencies. In their role as Official F1 Safety Car, our performance vehicles have been safely leading the Formula 1 field around the track when called upon in bad weather or in the event of an incident. When needed, our Official F1 Medical Car is on the spot as quickly as possible. To ensure this, we have upped the ante even further for the 2022 season with our most powerful models to-date, the AMG GT Black Series and the AMG GT 63 S. What’s more, their on-track performance displays their unfiltered motorsport DNA more than any of their predecessors. As always, of course, I nevertheless hope that these vehicles are called upon for support as little as possible”, says Christoph Sagemüller, Head of Motorsport of Mercedes-AMG GmbH.

Bernd Mayl nder, who has been driving the FIA Formula One World ChampionshipTM Official Safety Car since 2000 says: “I’m so happy that I will once again be at the wheel of the Formula 1 safety car for the 2022 season. And I’m especially pleased that this year it’s a Mercedes-AMG GT Black Series. I’ve already had the chance to test this amazing vehicle many times and I’m simply blown away by how close it is to a thoroughbred race car. It really is a major step compared to last year’s GT R – which was already at an extremely high level. To have a workplace like this in the name of safety is a dream come true.”