A special limited edition of the car in the spirit of the McLaren 12C GT3 racer. This unique version was known as the High Sport, which included improved redesigned front and rear bumpers with side air extractors and louvers on top of the front fenders to increase downforce and reduce drag, while significantly improving braking and tire cooling. The High Sport engine modification to 675hp could now achieve 0-60 mph in under three seconds flat in launch mode with a top speed north of 200 mph. 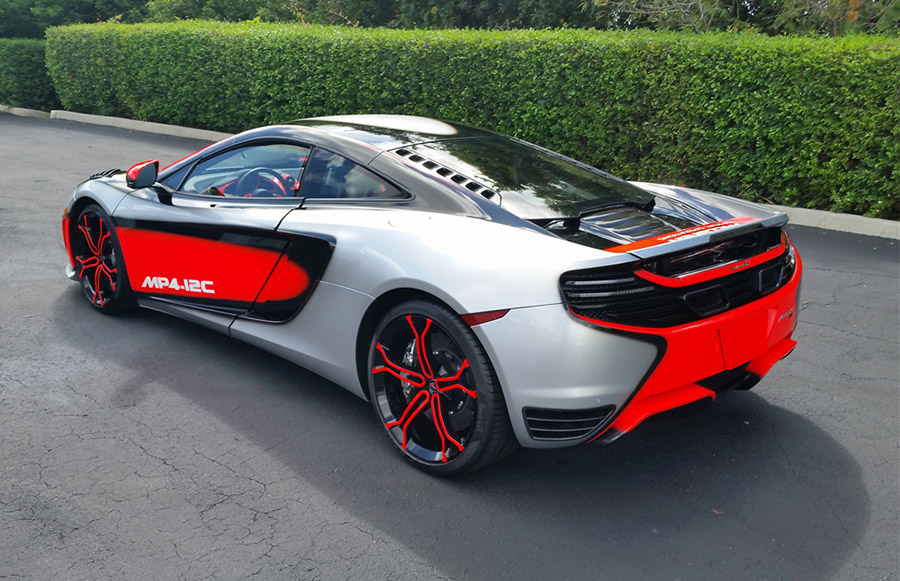 McLaren CEO Ron Dennis commissioned this particular MP4-12C High Sport, which is documented in a letter as the only one of the 10 produced in McLaren racing colors. This High Sport chassis, #9 of the 10 manufactured, is the only one painted in the FI Vodafone Racing Team livery colors and is further augmented by signatures under the hood from the winningest time set by the McLaren team drivers and pit crew. The signatures represent the victory and celebration that occurred at Nuremberg, Germany. The options include the Stealth Package, sport exhaust, carbon-ceramic brakes and a carbon-fiber engine package. The one-piece carbon-fiber MonoCell chassis has a mid-mounted 3.8-liter twin-turbocharged V8 engine with just under 500 ft/lbs of rear-end torque linked to a 7-speed dual clutch gearbox with three driving modes, normal, sport or track and a launch mode button.

Inside, the car features a Meridian sound system with navigation, Bluetooth and WiFi, carbon fiber, Alcantara and leather in the designated F1 team colors. To enhance the car’s functionality, special tagged designer travel luggage has been included, along with diamond-cut racing wheels. This unique McLaren has won several awards that are included in the sale, such as the Best British Import at the 2014 Festivals of Speed at Amelia Island, FL, the 2016 Best in Show at Cars on Fifth in Naples, FL, and the People’s Choice Award at the 2015 Festivals of Speed in St. Petersburg, FL. This special McLaren has 364 actual miles.

Just 16 of this Le Mans edition will be available in Europe, from a total of 50 worldwide.
Read more
Feature Videos

Today we're talking about the important feature of being able to remove the roof.
Read more
Feature Videos

You might have heard there's a recall of the McLaren Senna.
Read more