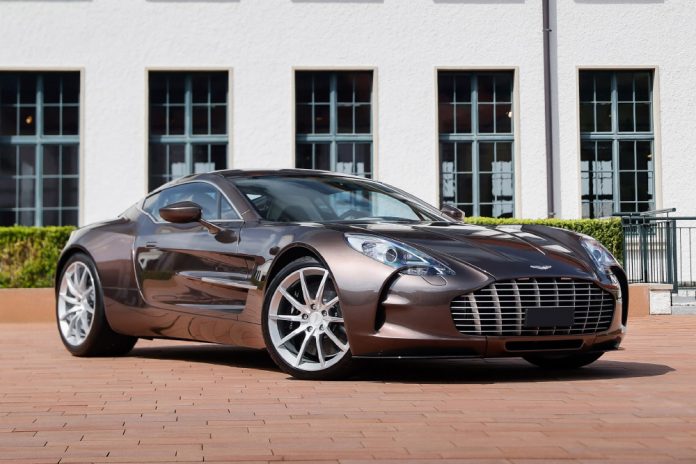 Hailed by contemporary commentators as “The British Zonda”, the Aston Martin One-77 was introduced to the world as a partially covered non-running prototype at the 2008 Paris Salon. The project was led by then-president Dr. Ulrich Bez, who stunned the world when he announced that Aston Martin—newly purchased by a consortium led by ProDrive’s Dave Richards—intended to sell the prestige vehicle for £1,000,000. It was a signal to the likes of Bugatti and Koenigsegg that the new players in the Aston Martin hierarchy meant serious business—and to reassure marque enthusiasts that Aston Martin had returned to its roots of building boutique speed machines for their customers.

At the Geneva Salon six months later, a full-size model of the One-77 dropped jaws the world over. The total price was now quoted as £1.1 million, with a mere £200,000 down-payment necessary to reserve one of these ultra-exclusive vehicles. At Geneva, Aston Martin released the full technical specifications of their new model, which made one thing clear: the One-77 was an amplification of everything that Aston Martin represented. Finally unveiled as a completed car at the 2009 Concorso d’Eleganza Villa d’Este a month later, the One-77 took home the “Award for Concept Cars and Prototypes”.

Perhaps, at first glance, the One-77 could be mistaken for a DB9 on steroids. Yet the new model was a carefully designed blend of old-world techniques and modern materials. Each single-piece aluminium front wing required three weeks of pounding and formation by an individual craftsman. These panels were mounted on a stiff, lightweight carbon-fibre monocoque chassis that tipped the scales at only 180 kilograms, helping to keep overall kerb weight to a minimum. Into this jewel of a shell the designers dropped a 7.3-litre version of the company’s highly developed V-12, which was specially reworked for the One-77 by the racing engineers at Cosworth.

With a minimal flywheel and quad exhaust pipes, the free-revving V-12 developed an elevated compression ratio of 10.9:1, good for 750 horsepower and 553 pound-feet of torque. Placed well behind the front axle, the powerful engine also sat 100 millimetres lower than in the DB9, thanks to the adoption of a dry-sump lubrication system. Power was administered to a six-speed manual automated transaxle through a carbon propshaft that passed through a magnesium-alloy torque tube, and control of the 20-inch rear wheels was handled by a limited-slip differential.

At launch, the One-77 was the most powerfully naturally aspirated car in the world; today it remains Aston Martin’s fastest road-going car, capable of hitting a top speed in excess of 220 mph, with 0-62 mph achievable in just 3.7 seconds. The One-77 was sprung with a fully adjustable suspension that automatically lowered at triple-digit speeds, at which point a huge rear wing deployed to increase downforce. Cross-drilled carbon-ceramic brakes brought the car back to earthbound speeds.

The One-77’s interior was no less impressive, with carbon fibre and black anodized aluminium trim dominating nearly every surface, while the electronically controlled sport seats and panelling were upholstered with stitched leather and Alcantara. A squared steering wheel and graphite instruments completed the elegant design. Despite the obvious emphasis on performance, the model was equipped with comfort amenities, including a multi-function infotainment screen with satellite navigation, iPod and Bluetooth connectivity, and a Bang & Olufsen premium sound system with magically rising “bookshelf” tweeters.

This 2012 Aston Martin One-77 is the 25th of just 77 examples ever made. It was delivered to Switzerland in 2012. According to the accompanying Certificate of Authenticity, it was ordered in the subtly luxurious colours of Bronze Pearl over Bitter Chocolate leather with Cream Truffle trim, with brushed exterior metal finishes, 10-spoke silver diamond-turned wheels and silver anodised interior finishes. The One-77 was not registered until 2014, when it was said to have been driven for the very first time. At the time of its sale to the present owner in 2017, Number 25 had driven just 900 kilometres; four years later it is showing a mere 1,009 kilometres. Invoices on file show regular services at Aston Martin Geneva since purchase by the current owner, and in June of 2020 the ride-height kit was replaced.

The finest and most powerful yet of Aston Martin’s grand tourers, the One-77 created an aura of exclusivity to such an extent that that Aston Martin never made it available for review by journalists. The trickle of first-hand coverage would follow in the years to come was solely the result of generous owners lending their cars to a small handful of respected media outlets. The star thoroughbred of Aston Martin’s 2000s grand touring stable, the One-77 remains one of the company’s most exquisite models, lauded by marque enthusiasts and supercar aficionados alike. That so few have had the opportunity drive a One-77, let alone add one to their collection, has only added to its enduring mystique.