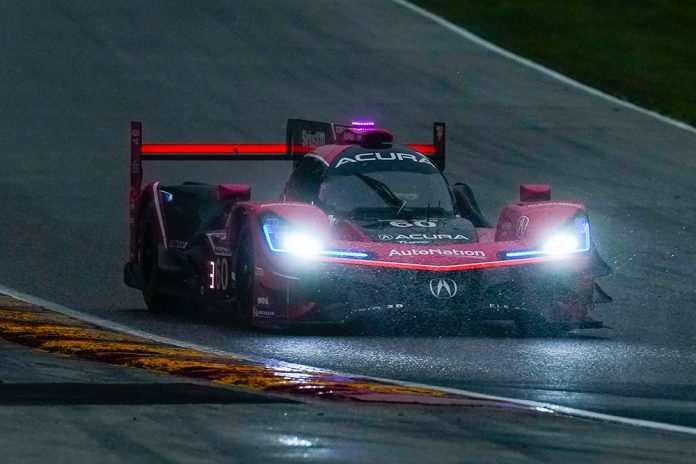 The #10 WTR Acura started on the front row in the hands of Ricky Taylor, and spent most of the two-hour, 40-minute event in that second position. However, the team was forced to make an extra stop in the final half hour when contact with the #55 Mazda cut Taylor’s co-driver, Filipe Albuquerque’s left rear tire.

Albuquerque fell to the fifth position, but moved into fourth place on the final lap of the race. Despite the unfortunate result, the team still maintains a 41-point lead in the drivers’ championship with three races remaining.

Meyer Shank Racing’s Olivier Pla started the race in the sixth position in his #60 ARX-05, before handing over to co-driver Dan Cameron. The team would take a gamble on fuel strategy, propelling Cameron into the lead of the race for 31 laps. However, the gamble did not pay off for the team and they were forced to come back down pit road for a splash with three and a half minutes remaining and ultimately finish fifth.

In the production-based GTD division, Gradient Racing’s Till Bechtolsheimer and Marc Miller led the charge for Acura, finishing ninth in their Acura NSX GT3 Evo.

Magnus with Archangel’s Andy Lally and John Potter looked set for their best result of the season before their #44 NSX lost a wheel in the closing stages of the race. The #76 Compass Racing Acura NSX GT3 Evo of Mario Farnbacher and Jeff Kingsley were taken out of contention when the team was forced to make an extra stop to change tires. Despite finishing in the 12th position, the team showed pace with Farnbacher setting the fastest lap of the race in GTD.

Till Bechtolsheimer (#66 Gradient Racing Acura NSX GT3 Evo) finished ninth: “Today was good! That was really tiring. It was about twice as long as I’m normally in the car for, and I wasn’t able to drink any water while I was in there, so I was struggling a little at the end physically. But I really enjoyed the stint and I was glad I was able to hang in there with the guys in front. I had a great time this whole weekend, this is a fantastic circuit and the NSX was a pleasure to drive here. We had pretty mixed conditions all weekend, and the Acura NSX does great in variable conditions. We were kind of hoping for rain in the race, and even though that didn’t end up happening, I had a lot of fun out there.”

Marc Miller (#66 Gradient Racing Acura NSX GT3 Evo) finished ninth: “We were hoping to make it on one stop after that caution, and that very few other cars would be able to, but it seems that almost everyone was able to make it on fuel. Our pace, compared to Friday and Saturday, was much, much better. But, because of the strategy we went with, our second stop was significantly longer and we lost a lot of ground there. I think we’re happy to leave with a top-10, but you always want to finish higher. Till drove an absolute rockstar stint. I hope people are beginning to realize what a great bronze he is. He drove one of the best races of his life and I really see a bright future for him in this sport. He kept us up there and in the race all day, definitely would not have finished in the top 10 if he didn’t put that performance in.

David Salters (President, Honda Performance Development) on today’s race at Road America: “Everybody worked really hard this weekend and, as always, put everything on the line to do well here. But, this is racing, sometimes that works, and sometimes it doesn’t. If you get a puncture [as happened to the #10 Wayne Taylor Racing Acura], there’s not much you can do about that. It’s unfortunate because the WTR team was looking at a likely top-two finish prior to their issue. For Meyer Shank Racing, I think they needed to take a calculated risk on strategy to fight for the win, and unfortunately it didn’t pan out for them. That’s racing. However, we are still leading the drivers’ championship leaving this race. Everything is to play for in these final races, and from here we’re going to look forward and move on.”