The National Hot Rod Association’s (NHRA) cornerstone event and world’s biggest drag-racing competition, held each year at Lucas Oil Raceway in Indianapolis and affectionately referred to as the “Big Go,” owes much of its prestige and earned renown to …

By: Dodge | Phtoos Courtesy of: Dodge 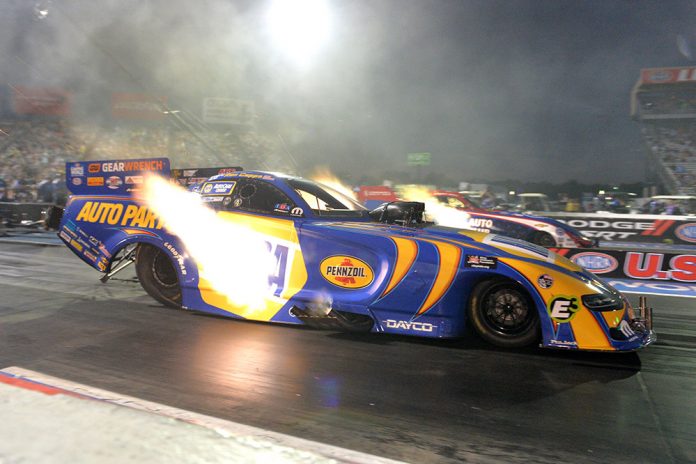 The National Hot Rod Association’s (NHRA) cornerstone event and world’s biggest drag-racing competition, held each year at Lucas Oil Raceway in Indianapolis and affectionately referred to as the “Big Go,” owes much of its prestige and earned renown to its history and reputation for offering up memorable racing, cutthroat competition, formidable challenges and drama; the 67th annual Dodge//SRT U.S. Nationals did not disappoint.

Don Schumacher Racing Funny Car driver Ron Capps powered his Dodge Charger SRT Hellcat from the No. 6 qualifier position, to a trio of 3.9-second passes to defeat Justin Schriefer, Robert Hight, and Alexis DeJoria, and advanced to only his second final elimination round appearance at the fabled event for the opportunity to vie for the elusive Dodge//SRT U.S. Nationals Wally trophy he has chased for 27 years.

The final set up a duel between Capps and fellow Funny Car veteran Tim Wilkerson in which the DSR HEMI®-powered machine made the first move on its way to laying down another solid sub-four second pass. His opponent, however, was able to match the effort and pull ahead for the win.

While Capps’ runner-up finish at the “Big Go” wasn’t the ending he had hoped for, as a consolation prize the result propelled him from a fifth place position in the Funny Car points standings at the beginning weekend, to close out the NHRA’s regular season in the top spot. The top ten qualifiers for the upcoming seven-event playoff series now see their points reset, and as the No. 1 seed, Capps is rewarded with a 20-point lead to begin the “Countdown to the Championship” at next weekend’s Mopar Express Lane Nationals Presented by Pennzoil at Maple Grove Raceway.

Another positive performance by the Cruz Pedregon Racing team began with the Snap-on Tools Dodge Charger SRT Hellcat qualifying fourth on the strength of the sole qualifying run of the weekend after two Saturday sessions were rained out. Cruz Pedregon, a three-time winner at Indy, drove straight down the lane with a pair of 3.92-second runs to dispatch Terry Haddock and J.R. Todd, and then advanced to his third consecutive semifinal showdown to face-off against the eventual event winner, Wilkerson.

The third Dodge and Mopar brand-supported Funny Car of Matt Hagan was sidelined for this weekend’s competition. After the defending NHRA world champion driver withdrew from competition after testing positive for COVID-19 and driving duties were entrusted to Tommy Johnson Jr., efforts to qualify the Dodge Charger SRT Hellcat Redeye entry were thwarted by a mechanical issue and rain, resulting in a DNS (Did not start). As a result, no points were awarded and Hagan slipped from leading the category to starting the playoffs from sixth place in the Funny Car championship standings.

In Top Fuel competition, last year’s runner-up finisher Leah Pruett was looking to take her Dodge//SRT Redeye dragster for another run for the prestigious Indy title. From the fifth spot on the eliminations ladder she began her drive with an opening round win over No. 13 seed Joe Morrison.

In the quarterfinals, Pruett knew she was up against tricky track conditions in the right lane and made sure she gave herself every advantage. She launched with a near-perfect reaction time, clocking a 0.002-second light, but the track showed no mercy and slowed Pruett’s progress, enabling rival Josh Hart to catch and pass her to score the win. With the result, Pruett clinched the No. 4 spot to start her fourth “Countdown to the Championship” playoff run.

While her participation in Top Fuel was done for the day, Pruett still had another chance to take home a Wally trophy, this time in the Sportsman category. A competitive field of 23 entries hit the staging lanes for the Constant Aviation Factory Stock Showdown (FSS) eliminations at the “Big Go” and among them, as the top HEMI®-powered entry, was Pruett who qualified her 2021 Dodge Challenger Mopar Drag Pak in the No. 12 spot on the basis of her single Friday evening pass at 7.965 seconds/ 166.70 mph after rain washed out any chance of getting in another run on Saturday. Despite the lack of track time, Pruett went into the opening round with the confidence of having earned two runner-up finishes at the last two events at Denver and Topeka.

That set up a second round battle for Pruett against No. 1 qualifier Joseph Welsh, who had had the advantage of registering a second qualifying run to earn the top seeding before rain ended everyone else’s opportunity to fine tune their car. While Pruett powered her Mopar Drag Pak to another solid and consistent 7.958 sec./176.07 mph run, her opponent took advantage of a quicker start and a 7.831/177.65 pass to end her hopes of advancing any further.

The NHRA’s “Countdown to the Championship” seven-event playoff series begins with next weekend’s Mopar Express Lane Nationals Presented by Pennzoil at Maple Grove Raceway near Reading, Pennsylvania on Sept.12-14, 2021.

“First and foremost, our thoughts are with Matt Hagan and his health is on everyone’s mind here. That’s a great race car with Dickie Venables and Hagan and you expect to go through that Dodge to win a race and a championship. It’s weird not having them in the show today. We have these small goals we set and one of those was to be the regular season points leader. Coming in here there were a lot of drivers with the chance to grab that top spot, it was pretty bunched up and exciting for the fans. Things fell our way today.

“We had some tough matchups with Robert Hight in the second round and Alexis (DeJoria) in the finals. And Tim Wilkerson in the final round. That final round is exactly why we race on the track and not on paper. I learned a long time ago not to expect a win. I don’t care how good your car is running. Tim is a great example. You don’t know what he’s going to do. We both went up, and talked before the run and we were going to throw down. He outran us. It stings. Hats off to them. They threw down that 0.91 in a lane nobody thought could run that time. Give them credit.”

“A semifinal finish after qualifying in the fourth position is a great day. We ran a 3.92 in both the first and second round. In the semifinal, the track had warmed up a bit so we ended up spinning the tires against eventual event winner Tim Wilkerson. Overall, we look back at it and think it’s the biggest race of the year and anytime you can get to the final four at an event like this, is really a credit to the team and their hard work. It was one of those races where we were on pace to mow them down and win the whole thing, but the track conditions deteriorated as it got warmer, and that was the end of our event there.

“As we look ahead and look at the countdown, I congratulated the team, everybody that did a great job to get ourselves into the countdown. We’ll start the playoffs eighth and we’re all going to be positioned with ten points separating each position from second place through the tenth, so it’s just a matter of how you do in these last seven events. We’re excited and optimistic that we’re going to have a car to beat. The Snap-on tools Dodge Charger SRT Hellcat has been really on a roll lately. The fact that we’ve been in the semis or better in the last three events in a row (with a runner-up finish at Brainerd) really bodes well for our team and our confidence.”

“The U.S. Nationals is normally the biggest marathon of a race as we usually test right before it, take part in a number of events, and have five qualifying sessions and then race on Monday. It’s been quite the opposite this year. This week we had just one qualifier and everybody got a real green track on race day. It was awesome to get through the first round with a very consistent car even with some issues at the top end powerwise.

“It’s no secret that the left lane is much more competitive to race on than the right lane, and we knew that going in. I sat in the car for almost fifty-five minutes against Josh Hart, as the Safety Safari did the best job that they could on track prep. This is where my team really comes together. I had a conversation with Neal after forty minutes and after looking at the track, they didn’t think we were going to make it off the line, so when they told me to ‘do whatever you want to do as a driver’, I got excited. This is your time. This is the Dodge//SRT U.S. Nationals. Usually as a driver you stage really shallow, you try to get the best E.T. that you can, but we wanted to take every advantage that we could. So I took a pretty good chunk out there, thinking I could distract him. I went 0.002 but just didn’t have enough power because we had to back down our HEMI to get down that right lane and it was not enough to get around Josh Hart in that second round.”

“Recently, our Factory Stock Showdown Dodge Drag Pak has performed in the clutch on Sunday’s and making race day very exciting. Today, we just did not have enough against the No. 1 qualifier in the other lane. We put on a good race, but it was a power management situation. Running early in the morning for E1, we were able to find that power and then we had about six hours before the second round. We just weren’t able to turn on the win light. We still have a strong hold in the points standings in the Factory Stock class. We will be testing before out next race at St. Louis and I’m excited about that. We have a good team with Kevin (Helms) and AJ (Berge) and we hope to get back to going rounds in a few weeks.”

“Unfortunately with not getting down the track in Q1 on Friday and rain all day yesterday, it put us behind the eight ball coming into Sunday. We did make a big improvement. It ran 7.97 at 177 mph, which is the best speed we’ve run in a long time. We’re heading in the right direction with this Empaco Drag Pak. We had a driver error in the first round. I was a little late. We got the new car blues out of the way and we’ll run better at St. Louis.”

“We’re obviously excited to be racing on Sunday. Anytime you race a team car and Leah Pruett, that’s a tough draw. We lost by six thou and that’s the right way to lose if you have to lose a race. Losing to a teammate makes it less painful. I’m excited about what we’ve done with the car. We’re starting to get this thing dialed in. We were happy with our runs this weekend with only two laps and we’re looking forward to the last two Constant Aviation Factory Stock Showdown races at St. Louis and Vegas to get ready for next year.”