A Look Back: Surviving the Seventeen Hours of Thunderhill

While crews and drivers were prepared to run 25 hours, overnight fog had other ideas. 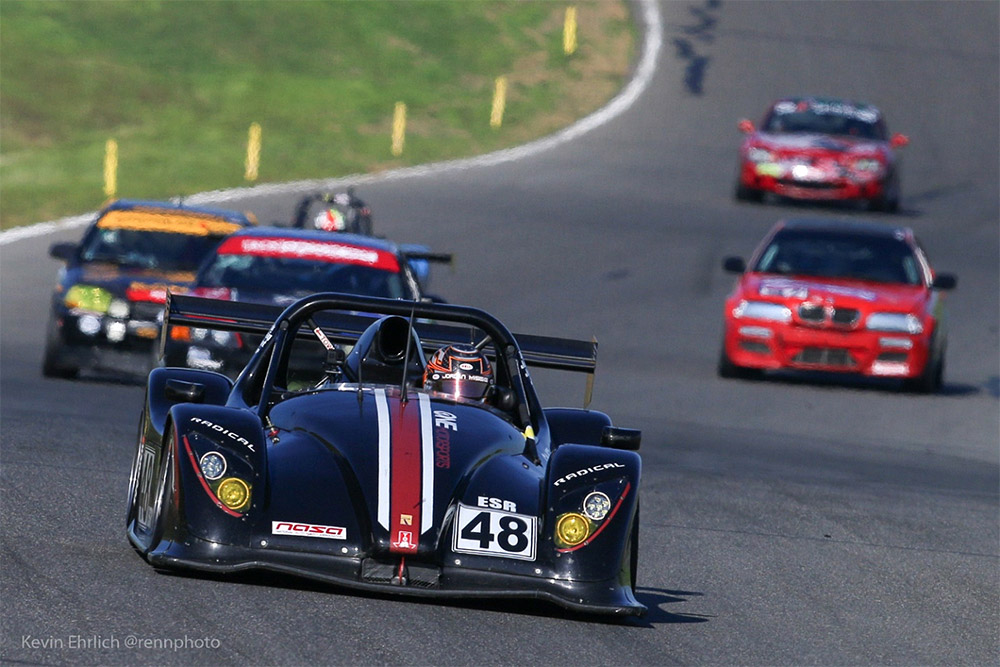 A field of 36 cars took the green flag under sunny skies to kick off the 2021 25 Hours of Thunderhill. While crews and drivers were prepared to run 25 hours, overnight fog had other ideas. The result was a seventeen-hour enduro with good weather at the start and finish but an overnight fog-induced break in between. 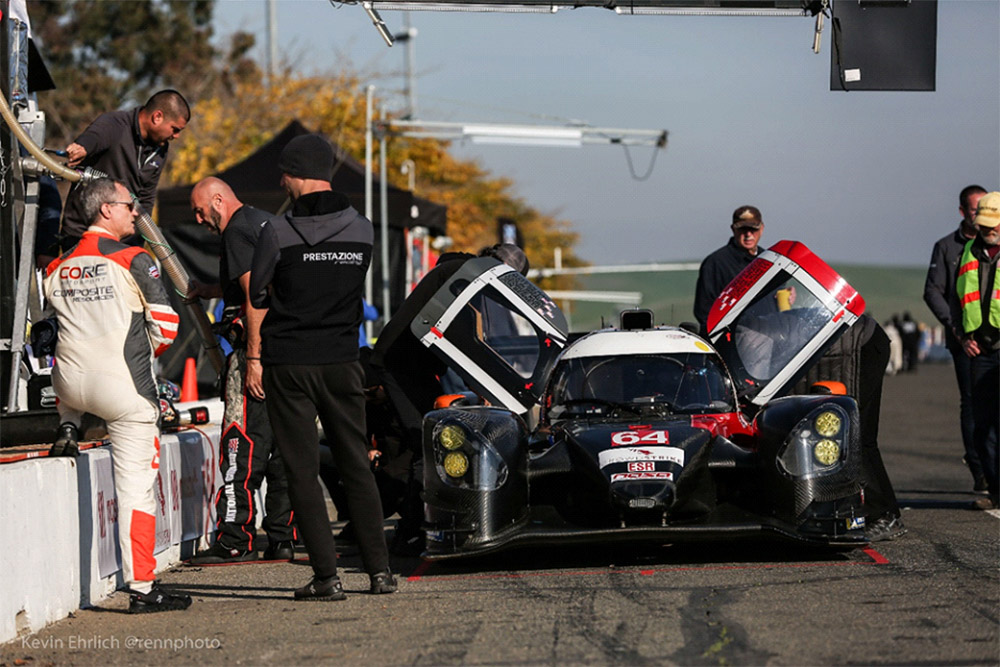 The fight for overall honors raged between two prototype teams in the ESR, with the lead changing back and forth during the race. The Team One Motorsports 2 Radical SR3 ultimately saw the checkered flag first after the Crowdstrike/Mosaic Motorsports Duqueine LMP3 suffered a late mechanical issue. Team One Motorsports 2 drivers Jeff Shafer, Anthony Bullock, Josh Sarchet and Jordan Missig logged their first overall Thunderhill victory. The result demonstrated that the Radical is proving to be a stout contender at Thunderhill. A different team took a Radical SR3 to victory in 2019, making 2021 a repeat for the marque.

The Crowdstrike/Mosaic Motorsports team knew they had a weapon with their Duqueine LMP3 prototype, a strong driver line-up, an experienced and talented crew, and a lot of preparation. They also knew their car had a history of axle reliability issues and prepared for failures. Sure enough, two axle failures ultimately cost them the victory – the last one coming while leading with an hour to go. While a fix only took twenty minutes, the margin at the checkered flag was six laps – about a ten minute gap. 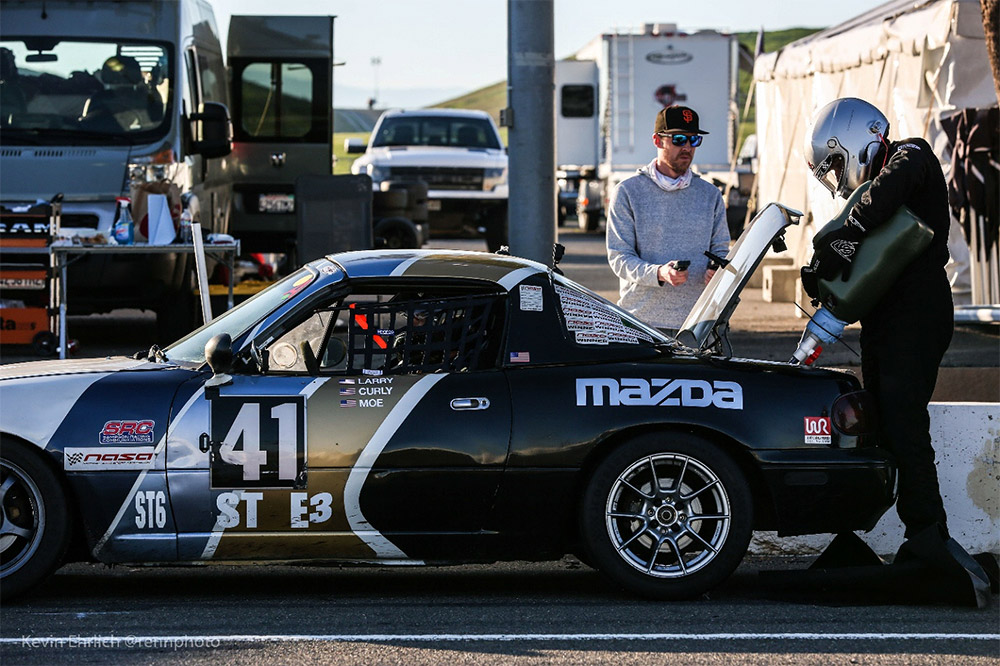 The lower car count compared to those of recent years made for less traffic on track. Reliability was a bigger challenge than contact. As is tradition, the 25 Hours of Thunderhill attracted a wide range of entries. If you’ve got a race car, you can probably find a class to race in at Thunderhill. Prototypes, Mazda Miatas, BMW 3 series, Honda Civics, and others filled the paddock. Teams tracked their competition but the primary race was a reliability push for many hours, many in the dark and cold of December, until the clock dictates an end. 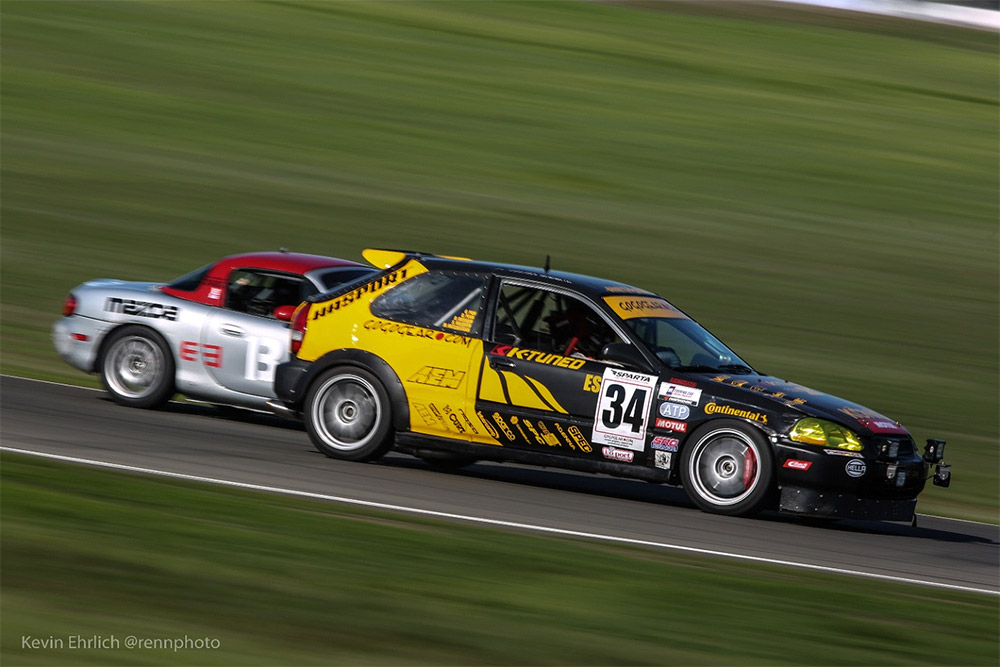 Two-thirds of the cars were more than a decade old, a tangible sign of the durability of grass roots racing. Amateur drivers and volunteer crews were more common than full-time professional racers. In fact, many team entrants have businesses running karts or servicing road and race cars. 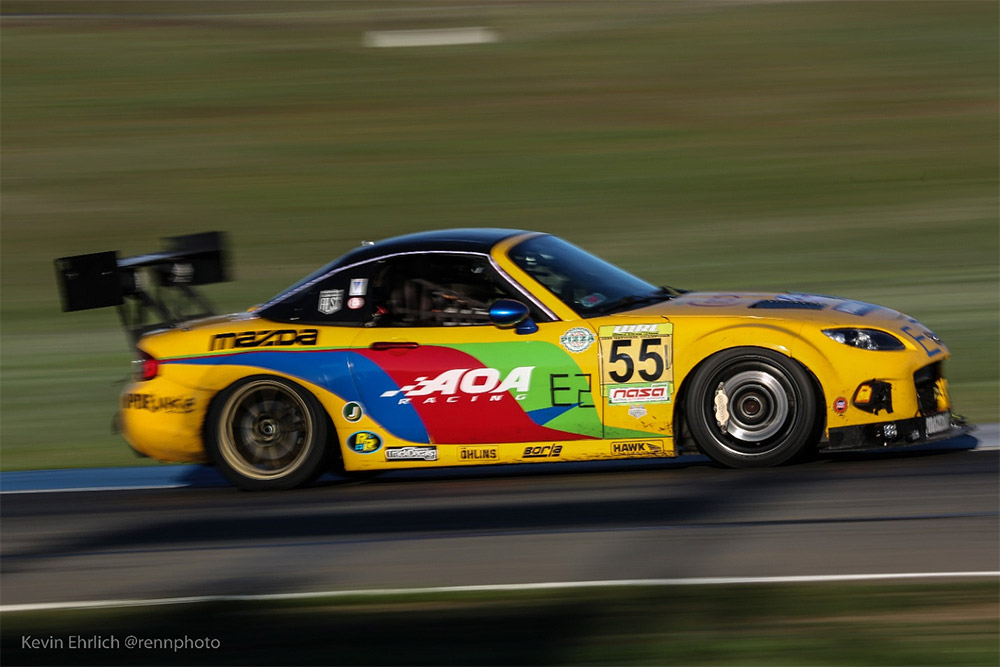 Those looking for interesting stories didn’t have far to go. A Teen Mazda Challenge effort came together only eight weeks before the race. The maroon #18 2012 Spec MX-5 missed Friday night qualifying with a clutch slave sleeve failure. A replacement part was located and delivered to the track. The team made the fix and had only a single test drive tour around the paddock before starting the race on Saturday. Since they missed qualifying, they started at the back of the field. 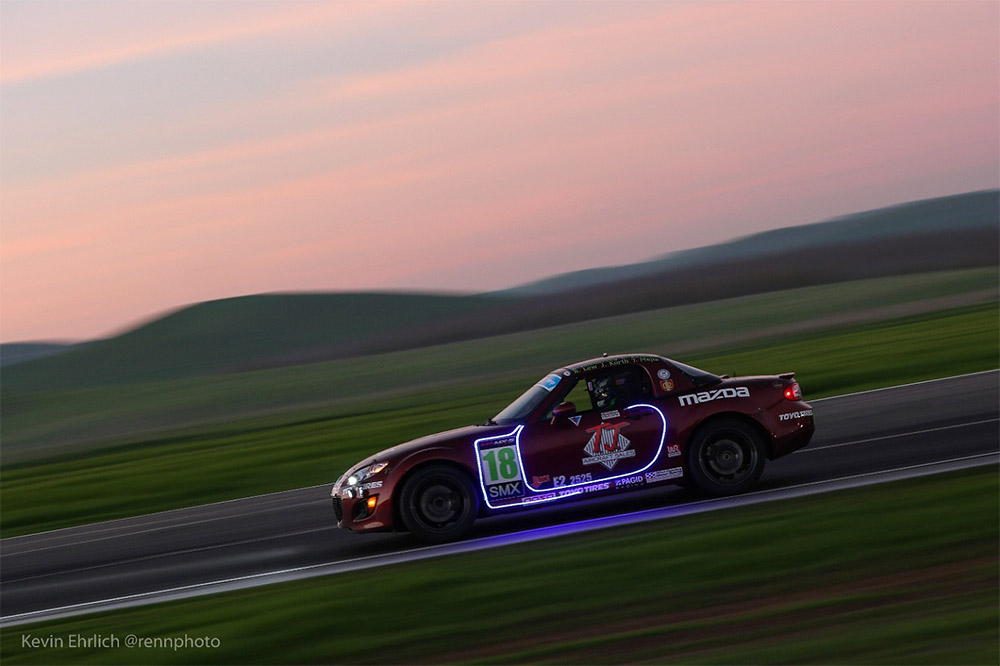 As the name implies, the Teen Mazda Challenge effort focuses on finding and developing youth talent. Five college students were hand-picked based on driving skills, academics and character. The race came during college finals which required drivers to juggle both their racing duties and college studies. It was not uncommon to see a Mazda driver concentrating on schoolwork with their laptop in the first-floor open area of the race control tower. 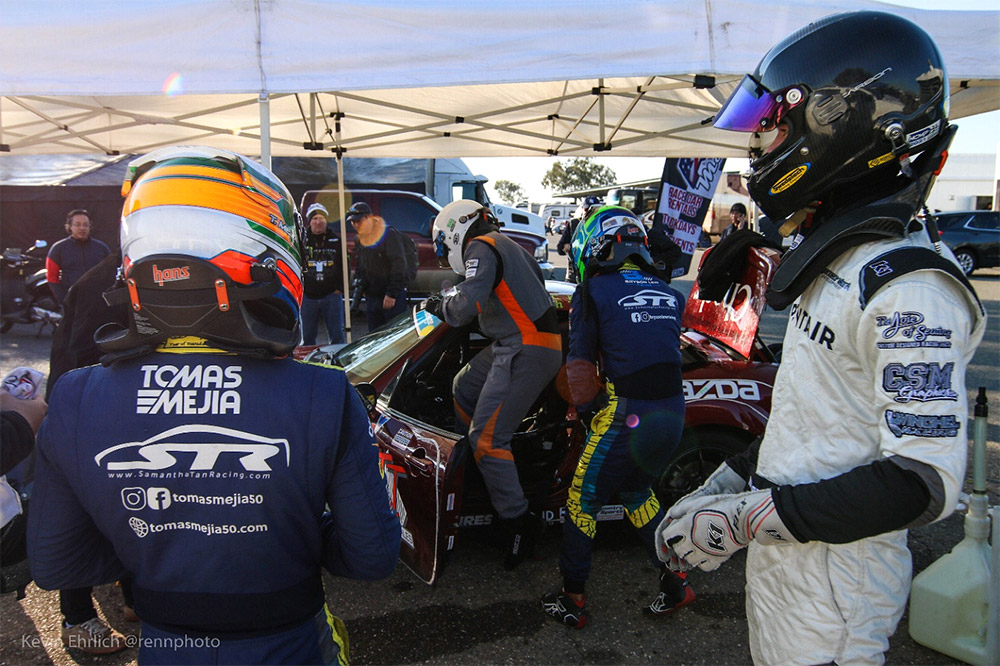 Bryson Lew, Clayton Ketcher, Tomas Mejia, Jared Korth, and Brenden Ruzbarsky took their Spec MX-5 to a 20th place overall finish and a sixth-place class finish. The team ran a quick and consistent pace against Mazda and BMW competition. They ran a clean race with no significant contact and only a single driver-caused penalty when a yellow flag went unnoticed. Ketcher and Mejia had previous 25 Hours of Thunderhill experience but the 2021 race was the first for the others. Not only was it the first for the new trio, it was the first night racing and multi-class racing experience for them. The successful result proves the concept of taking young drivers with potential and getting them into events where they can continue to grow and expand their skills. The Mazda contingency program is targeted directly at this type of grassroots amateur racing. 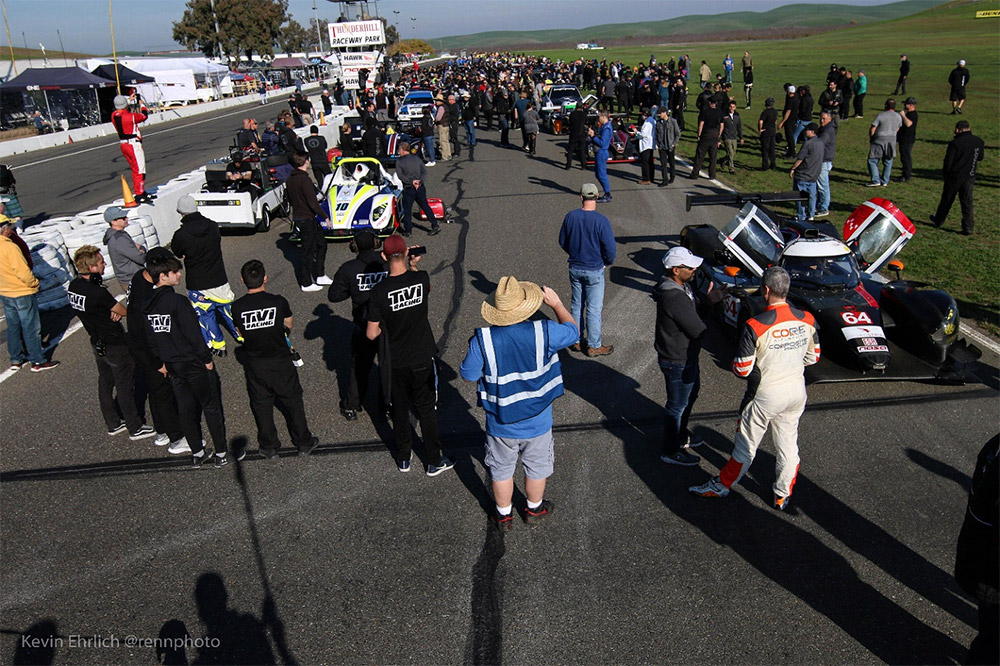 Before the start, teams rolled their cars to the starting grid on the front straight. Crews, drivers, friends, media, officials and any spectators strolled up and down the grid. Teams gathered for photos. Several cars arranged driver helmets on the hood or roof for a photo op. The sense of anticipation as each car moved into place was palpable. 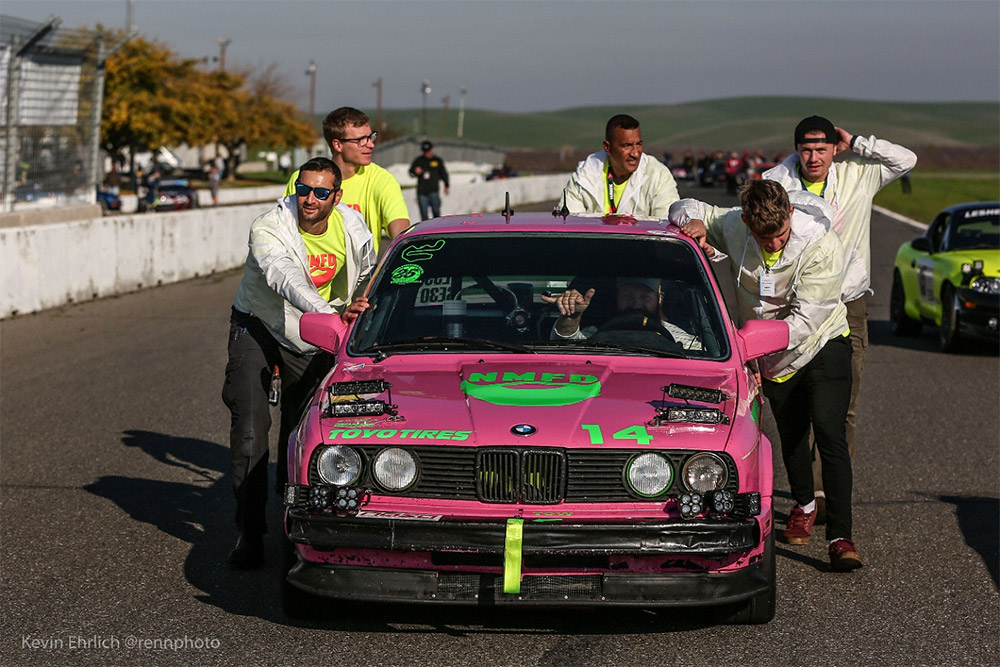 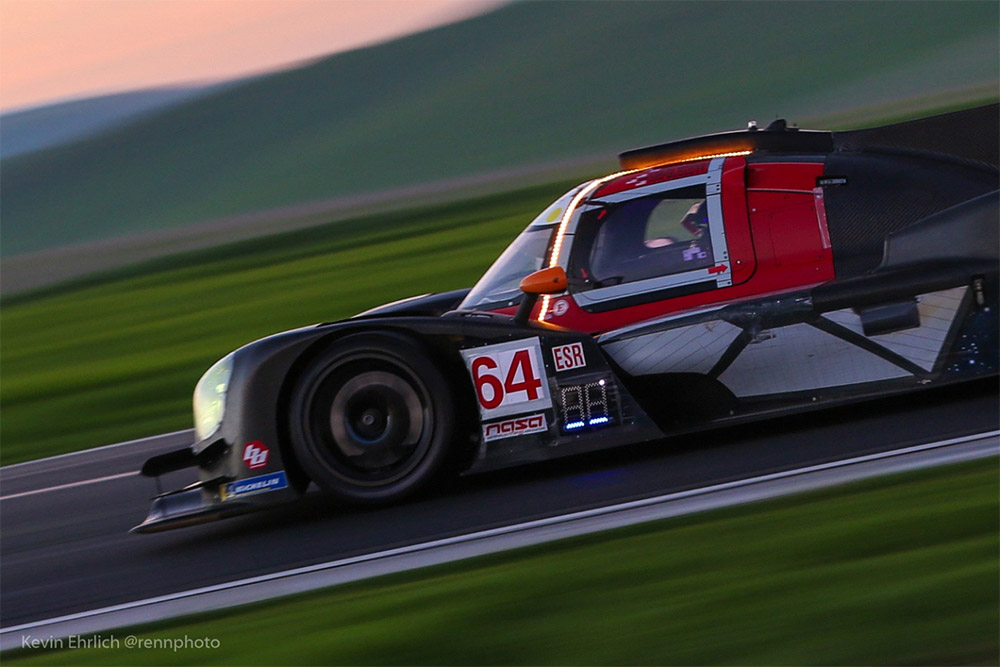 The race almost ended for some in the first corner. The pole-sitting #64 Crowdstrike/Mosaic Motorsports Duqueine LMP3 spun on the parade lap and moved to the rear of the field, leaving the #10 TVI Racing Radical to assume the pole position. When the green flag waved, a cooling hose came loose from the white Radical due to overheating. It spun at the exit of the first turn on its own fluid and miraculously wasn’t collected by the full field charging just behind. 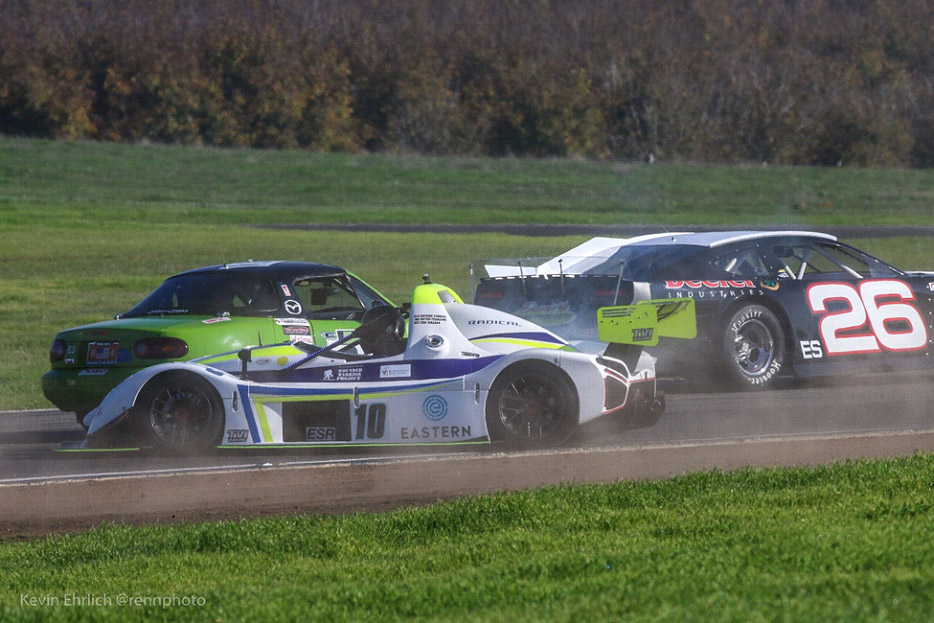 Endurance racing uniquely runs from daylight through dusk and into the night. Race cars circulated around the three-mile natural terrain Thunderhill road course beneath the orange and pink sunset backdrop. Headlights began to illuminate the pavement. Unique car lights made it easier for crews to identify their car as the light gave way to the dark. With so many different cars, each had its own night-time identity. Some cars lit up their brake rotors in heavy braking, particularly at the end of the high-speed back straight as cars scrubbed speed to make the tight Turn 14. 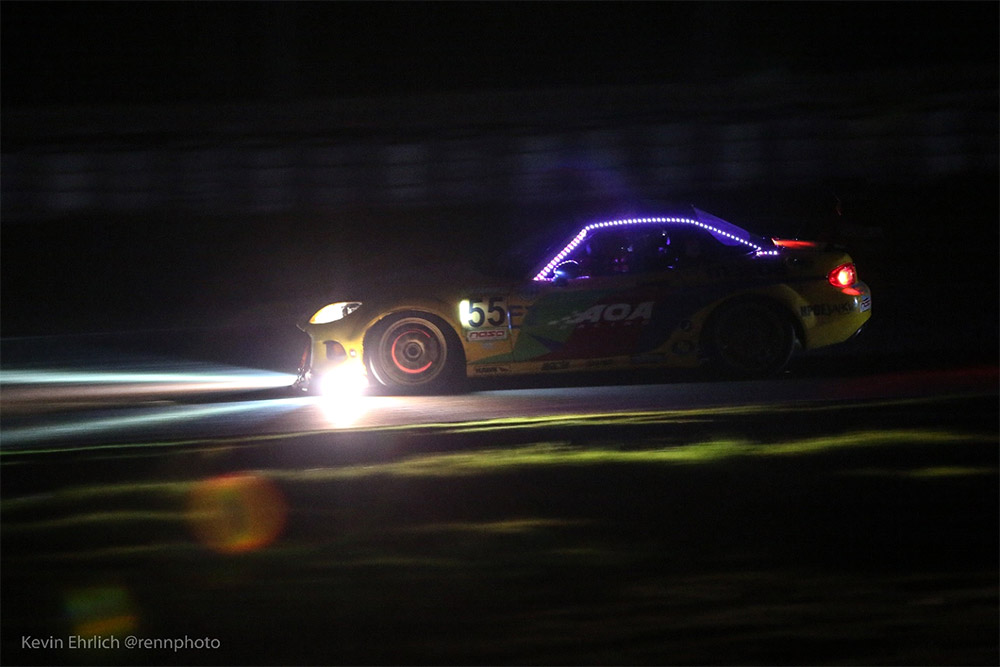 While competitors raced themselves and each other, they also contented with the fog-induced intermission. If fog was a race car, it would be lauded for pace. The sun set at 4:46pm under clear skies. Traces of fog started to show beneath the paddock lights by 5:24pm. When the safety car began to circulate at 5:49pm for a scheduled corner worker change, the clear skies had disappeared but visibility was still reasonable. There was no indication that fog was or would be an issue, and the field prepared for a restart.

Yet six minutes later, at 5:55pm, the fog began to overcome the track. Visibility quickly disappeared. The safety car continued to lead the field through the milky darkness. At 6:11pm, tail lights were barely visible in Turn 6 to those standing on pit lane. Five minutes later, cars rolled to a halt on the front straight and the red flag waved to halt proceedings. 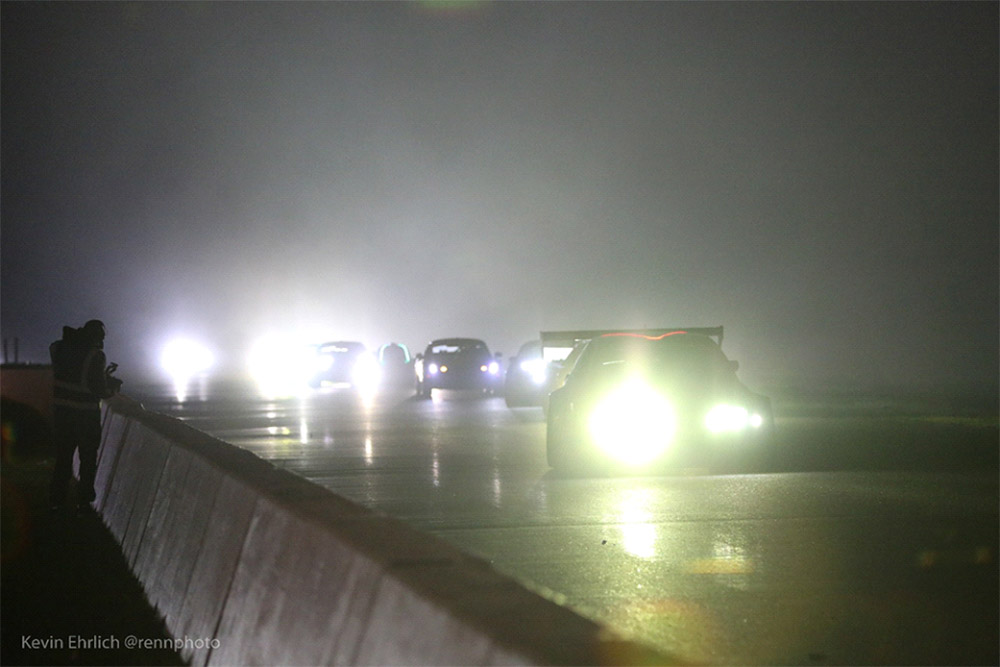 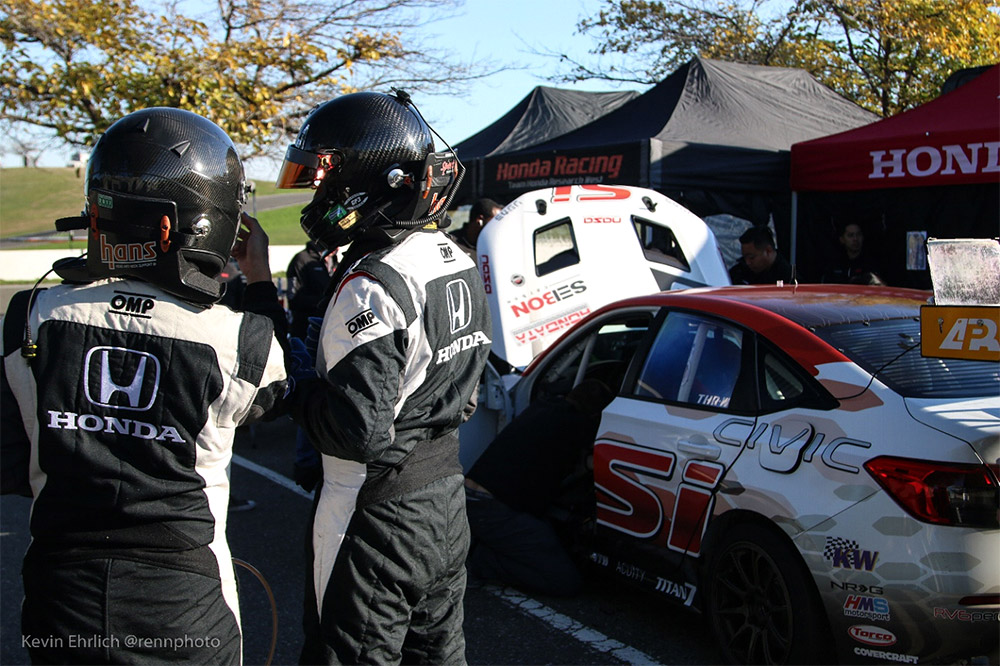 Team Honda Research West is a regular Thunderhill participant. Forty Honda employees brought a pair of brand-new white and red 2022 Honda Civic Si entries. Honda used Thunderhill as a public Research and Development test for the brand new Si, just as it had for other cars many times in the past. The team shook down the race cars at Thunderhill in October but otherwise had never turned a lap in competition.

A road-worthy Si in the paddock became an engine donor when the one of the race cars required a transplant early in the race. The sister car had its own challenges, leaving a trail of smoke in its wake and did not see the checkered flag. Full credit to Team Honda for supporting a culture that craves the test of motorsports to strengthen the product. Finding and fixing problems on the racetrack to make road cars better is more important than trophies at any particular event. 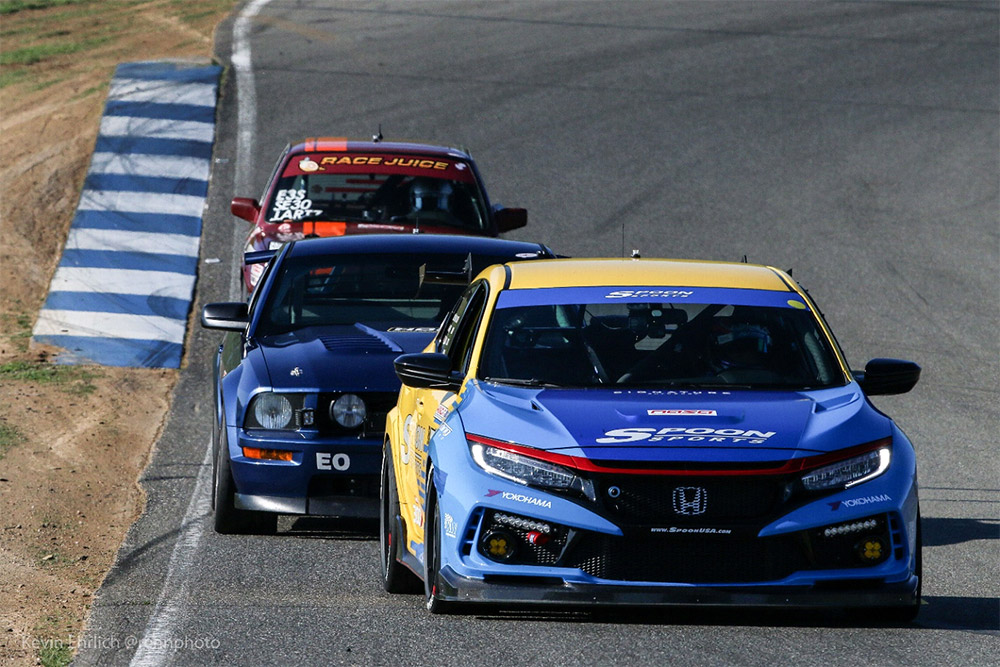 Other Civic entries attracted a lot of attention. Spoon Sports, a well-known Honda aftermarket tuning shop and motorsports outfit, won their class with a blue and yellow Type R. They took the win with a 12 lap gap over the DIG Motorsports Ford Mustang. Elsewhere, a mighty 1998 Honda Civic from GoGoRacing persisted to log a 22nd place overall finish. The team entered an unlimited class, mostly to dispense with worrying about staying within specific limits. In a classic reliability run approach, drivers stuck to a steady pace to preserve the car rather than get into car-to-car combat with others. Their efforts were rewarded when their Civic passed beneath the checkered flag. 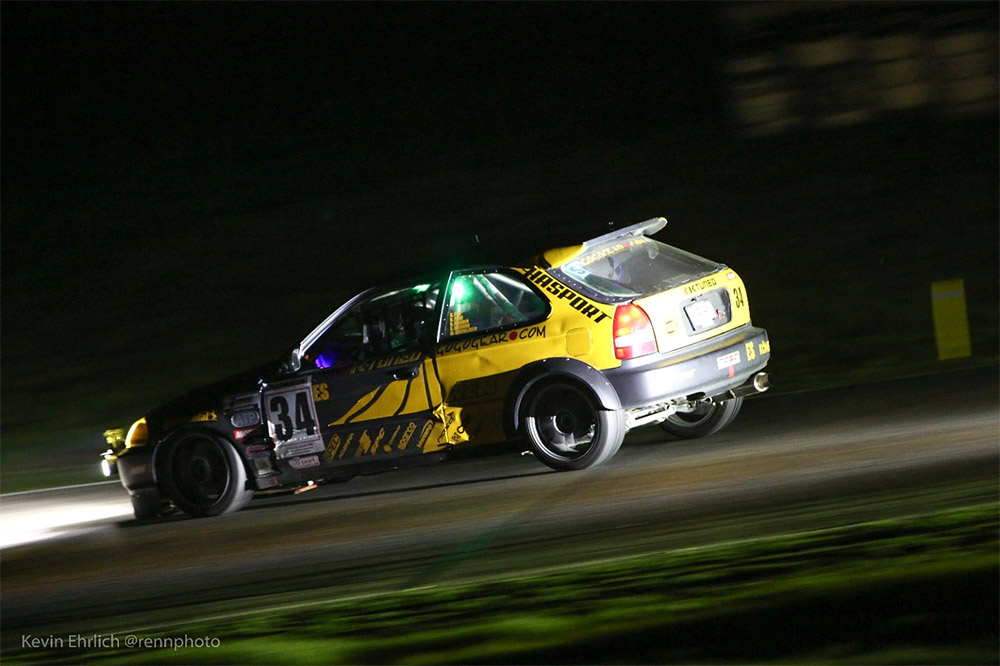 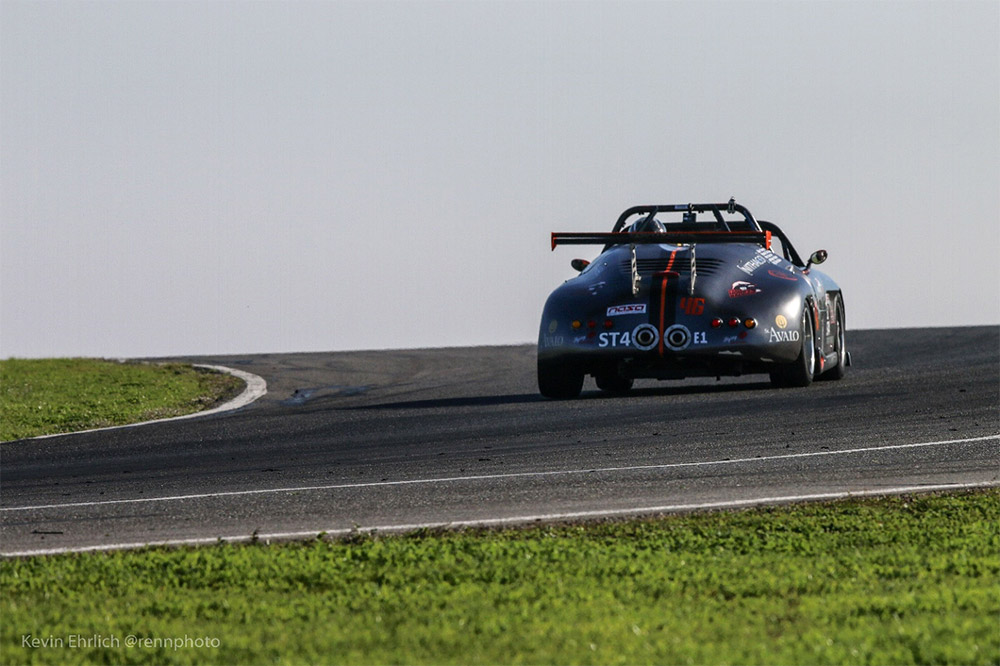 The 25 Hours of Thunderhill prides itself on running a wide variety of equipment around a great natural terrain road course. The glorious oddball award went to the class-winning Funduro Racing entry. The tube-frame roadster body with a four-cylinder VW engine looked like an outlaw Porsche 356 or VW Beetle. The roadster outlasted others, including a Civic Type R that suffered a broken engine mount which caused an oil line failure. The Type R crew made repairs and recovered to earn a second place in class. 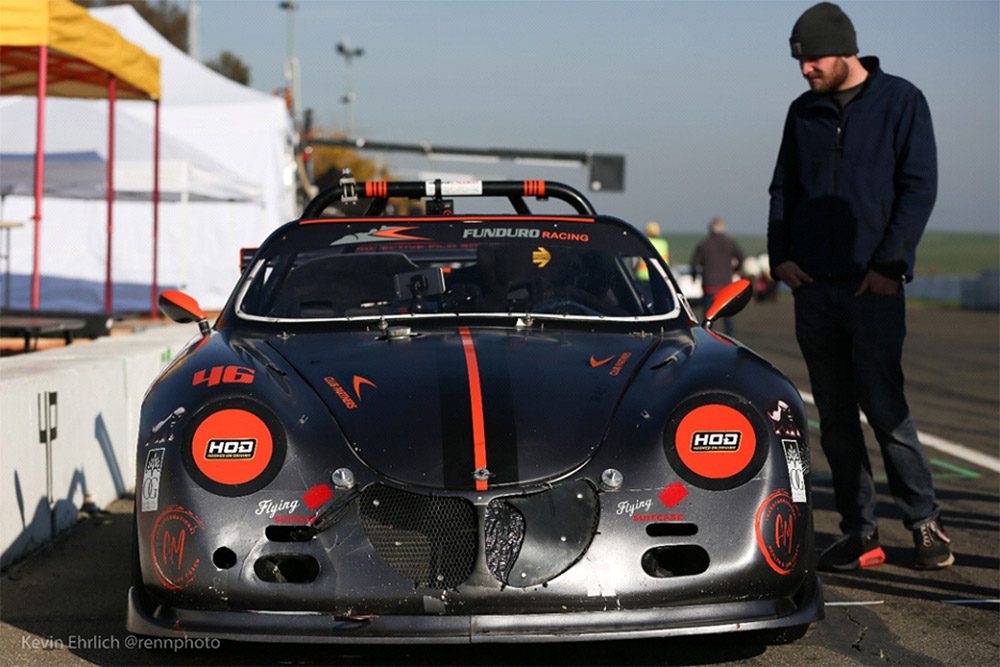 Since 2003 The National Auto Sport Association has steered the 25 Hours of Thunderhill through all kinds of weather, fields of all sizes, and entrants of all kinds. We look forward to what the 2022 race will bring on the first weekend of December at Thunderhill.