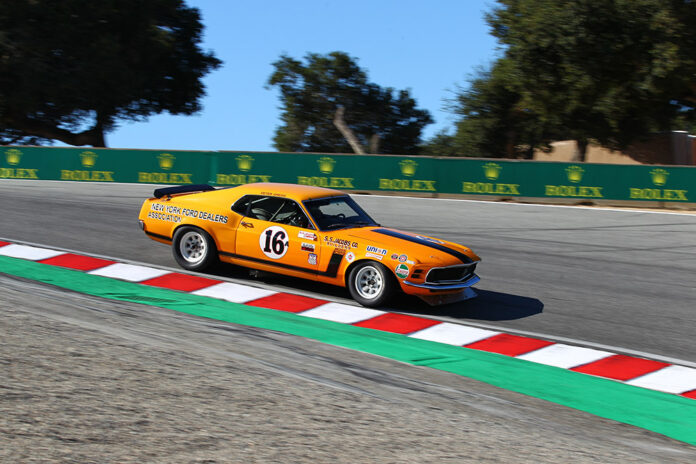 The distinct unmuffled rumble of brute American muscle cars will be celebrated at the Rolex Monterey Motorsports Reunion August 12-15 as Ford Motor Company presents Ford in Trans-Am – a 55th Anniversary.

Created by the Sports Car Club of America in 1966, the Trans-Am series initially spotlighted mostly European under-2.0-litre cars, yet it was the mighty V8s that catapulted the series into prominence. Ford led the way, capturing the over-2.0-litre manufacturers’ title in 1966 and 1967, led notably by Jerry Titus behind the wheel of Shelby American Team’s Mustang.

The Rolex Monterey Motorsports Reunion at WeatherTech Raceway Laguna Seca is about celebrating key milestones, achievements and motorsport history in a lively high-octane festival experience. There are few race groups that captivate all audiences more than historic Trans-Am with its all-American lineup and drivers who were household names in the ‘60s and ‘70s. The mantra “Win on Sunday. Sell on Monday” was more than a slogan, it was true for the automakers of these production-based racers.

“Mustang is one of the biggest success stories in automotive history and its success began on this very race track in Trans-Am’s early days. We’re so proud to return to Monterey this August to re-live this memorable chapter in our history — some of the best racing ever witnessed — and a significant contributor to the Mustang story.” – Jim Farley, Ford Motor Company CEO

“The histories of Ford, Trans-Am and Laguna Seca date back to 1969 when the series made its way to Monterey,” explained John Narigi, president and general manager of WeatherTech Raceway Laguna Seca. “It was a who’s who of drivers that August weekend. In Fords were Peter Revson, George Follmer, Parnelli Jones and Dan Gurney, who finished third in his Ford Mustang Boss 302. Mustang came back to win in 1970, with Parnelli Jones taking the checker.”

“The Ford team really understands that their heritage is a critical path leading to the company’s future,” said Barry Toepke, director of heritage events and public relations for WeatherTech Raceway Laguna Seca. “In addition to showcasing their performance achievements and hosting notable Trans-Am drivers, Ford will highlight its present and future.”