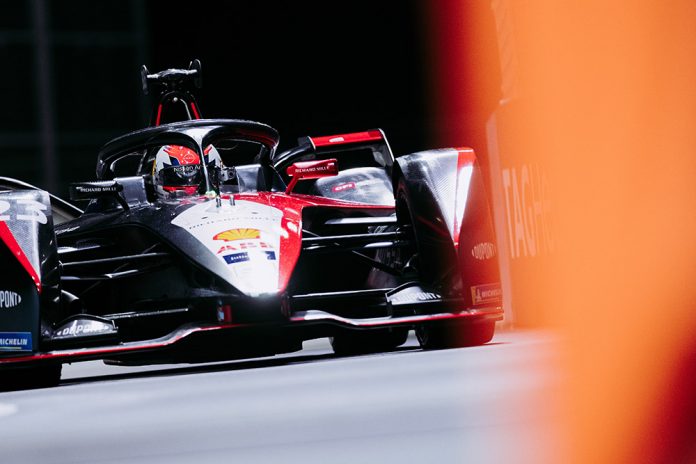 Today, in round 13, Rowland put his car in P2 for the race start, with Buemi lining up in P3 for round 12 the previous day. However, disqualifications for a technical infringement ruled both cars out of the points in round 12, having crossed the line in P4 for Buemi and P10 for Rowland. Racing incidents and time penalties in round 13 meant the pace shown in qualifying and at times in the races did not return points for the team.

The teams raced for the first time on the new ExCeL Circuit in London’s iconic Royal Docks, with the track running 25 per cent inside the ExCeL London exhibition center building; a first for top-level international motorsport. Mixed conditions throughout the weekend challenged the drivers and both races returned plenty of action for the fans.

“A bittersweet weekend because we finally showed that apart from being strong in qualifying, which is something we have seen all season, we also found strong pace in the races,” said Tommaso Volpe, Nissan global motorsports director. “In both races we were fast, but the races were eventful, and for different reasons we did not score points in either race. But it is good to see this strong race pace, so we now look forward to the last two races of the season in Berlin and to finish the season with a good team result.”

Nissan races in Formula E to bring the excitement and fun of zero-emission electric vehicles to a global audience. As part of its goal to achieve carbon neutrality across its operations and the life cycle of its products by 2050, Nissan intends to electrify all-new Nissan vehicle offerings by the early 2030s in key markets. Nissan aims to bring its expertise in transferring knowledge and technology between the racetrack and road for better electric vehicles for customers.

“We had an energy management issue in round 12 which ultimately cost us a good team result,” said Gregory Driot, co-team principal of Nissan e.dams. “In round 13 we were racing with the leaders with Oli when an unfortunate racing incident and resulting time penalty put him out of contention. That’s racing sometimes, but overall our pace was strong, so this is a positive to take to the last rounds in Berlin.”