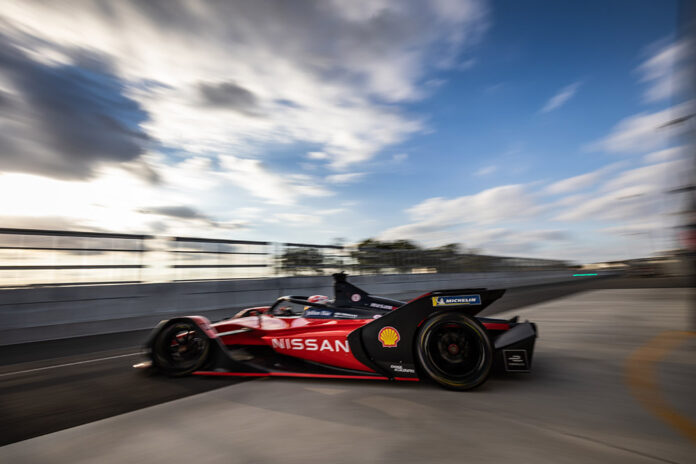 The Nissan e.dams Formula E race car will be even bolder as it takes to the track for season eight of the ABB FIA Formula E World Championship thanks to a striking new evolution of its recognizable Japanese kimono-themed livery, now with prominent bright red highlights. Nissan returns for its fourth season competition in the all-electric street racing series to powerfully demonstrate the excitement and performance of its EV technology.

Nissan unveiled the new racing livery today, with the dramatic black and red design inspired by the Japanese kimono, a traditional symbol of longevity and good fortune. An appealing design flourish on the car’s nosecone area created by Alfonso Albaisa, Nissan’s senior vice president for global design, shows the characteristic sharp folds of the kimono.

“We want to be bolder than ever in this new Formula E racing season,” said Tommaso Volpe, Nissan global motorsports director. “Nissan is here not only to race and win, but to entertain the fans and showcase just how thrilling electric vehicles can be. With our powerful new racing livery our cars will be unmissable on the track as we compete in this exciting global championship. We will also be activating our racing endeavors like never before this season with fresh and innovative activities like our Nissan Brain to Performance program that aims to train our racing drivers’ brains to be even faster. We can’t wait to get season eight started.”

Nissan races in this all-electric world championship to bring the excitement and fun of zero-emission electric vehicles to a global audience. As part of its goal to achieve carbon neutrality across its operations and the life cycle of its products by 2050, Nissan intends to electrify all-new Nissan vehicle offerings by the early 2030s in key markets. Nissan aims to bring its expertise in transferring knowledge and technology between the racetrack and road for better electric vehicles for customers.

Along with its bold new livery for season eight, the team will also have an exciting new driver line-up. Joining record-holding Formula E veteran Sebastien Buemi, who remains with the team for a fourth season, will be rising star Maximilian Guenther. The German racer has shown brilliant pace already in Formula E with three race victories and a second-place podium. Guenther will join Buemi and the team at the official Formula E pre-season test at the Ricardo Tormo Circuit in Valencia, Spain, November 29 to December 2.

Nissan e.dams co-team principals Gregory and Olivier Driot issued this joint statement: “As a team we have set ourselves far-reaching goals for season eight, the last season of the Formula E’s Gen2 era. Our race car showed its true pace at the end of last season, so with the powerful new livery and a compelling driver line-up that combines experience and hunger to win, we want and expect to be racing at the front from the very first rounds in Diriyah. Before this, we have a full program of testing to complete in Valencia with Seb and Maximilian.”

Nissan e.dams and Shell have recently announced the continuation of their partnership with the signing of a new, multi-year deal, further demonstrating their long-term commitment to Formula E. Partners since 2018, the latest announcement will see Nissan and Shell continue to work together into the Gen 3 era (beginning from the 2022/2023 season), driving technical developments and enhancing performance with the use of Shell’s innovative E-transmission fluids and greases.

“We are delighted to extend our partnership with Nissan e.dams over the coming years,” said Istvàn Kapitàny, Executive Vice President Retail at Royal Dutch Shell. “Since the beginning of our partnership in 2018, we have made significant development in the expansion of our EV charging infrastructure at forecourts, homes and workplaces and this partnership allows us to further enhance our transition to clean mobility solutions.”

Nissan Brain to Performance, launched in June 2021, is an exciting, cutting-edge new program that uses advanced brain imaging and analysis to determine the anatomical specifics of high performance, professional drivers’ brains, and, through a bespoke brain training program, seeks to enhance their brain performance in the search for greater performance on the racetrack. This innovative, long-term program will build momentum as Nissan races into season eight of the ABB FIA Formula E World Championship, and beyond.

Sebastien Buemi
“It’s great to be back with Nissan e.dams for our fourth season together, and I would like to warmly welcome Maximilian to the team. Maximilian brings good pace and some fresh approaches to racing, so I hope we can create a powerful combination based on the strong foundations and extensive experience we have at Nissan e.dams. We aim to be competitive from the first race to the last. We’ve got work to do and the team is highly motivated.”

Maximilian Guenther
“I’m really excited to go racing with such a historic and successful racing brand as Nissan. Formula E is extremely competitive and thrilling to race in, and I feel that with Seb as my teammate and the team behind me, together we can do great things. In my first weeks with the team, I can see that there are big plans both on and off the track and I am looking forward to a busy and competitive season eight. The new race car looks stunning, and I can’t wait to drive it at full race pace at the Valencia test.”