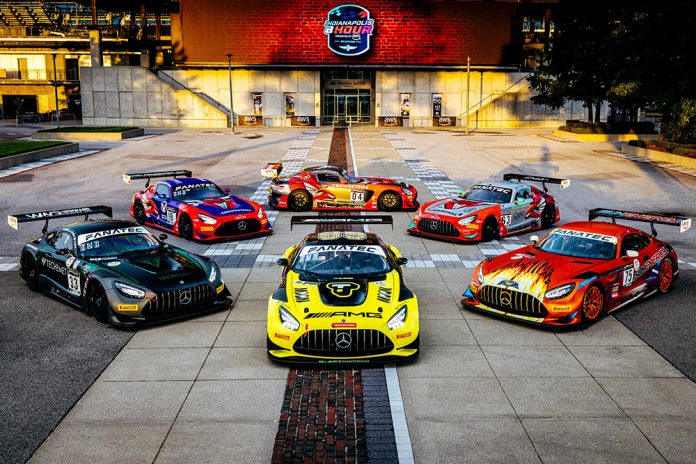 Mercedes-AMG Motorsport Customer Racing teams return to one of the biggest stages in all of motorsports this weekend for the season-ending race of the Fanatec GT World Challenge America powered by AWS on the road course at Indianapolis Motor Speedway (IMS). Sunday’s three-hour GT World Challenge America finale serves as an opening act for the highly anticipated Indianapolis 8 Hour presented by AWS, which promises to be largest and most competitive North American round of the worldwide Intercontinental GT Challenge (IGTC) powered by Pirelli in the five-year history of the global championship’s U.S. race. The IMS event also includes the season-ending rounds of the Pirelli GT4 America and GT America powered by AWS championships at the “Brickyard,” taking place October 14 – 17.

Everything leads up to Sunday’s featured IGTC Indianapolis 8 Hour, which debuted at Indy last year after the first three editions of the U.S. round took place at WeatherTech Raceway Laguna Seca from 2017 through 2019. This year’s eight-hour race on the 2.59-mile IMS road course is scheduled to start this Sunday, October 17 at 10 a.m. EDT.

In a unique twist, the first three hours of the 8 Hour race double as the GT World Challenge America season finale. Of the seven Mercedes-AMG GT3 entries from five teams scheduled to take the green flag Sunday, four entries will battle for IGTC championship points in addition to overall and class honors in the 8 Hour.

Meanwhile, the three-car Mercedes-AMG GT3 team from DXDT Racing is focused in on a strong GT World Challenge America Pro-Am class results at the three-hour mark while also planning to go the full Indianapolis 8 Hour distance.

The DXDT team has combined for a trio of GT World Challenge America Pro-Am wins this year, and a fourth victory by any one of the team’s three entries would result in an ideal end to the season.

George Kurtz and Colin Braun, who have two Pro-Am wins this season at Sonoma Raceway and Circuit of The Americas (COTA), co-drove to the GT World Challenge Pro-Am victory at Indianapolis last year. They were then joined by Ben Keating in powering through the remainder of the race’s five hours to secure 8 Hour Pro-Am honors. The winning trio reunites this weekend in the No. 04 DXDT Racing Mercedes-AMG GT3.

Erin Vogel and Michael Cooper earned their first GT3 win together in June at VIRginia International Raceway (VIR) to highlight their first season of competition with both DXDT and the Mercedes-AMG GT3. They will share the No. 19 in the full 8 Hour portion of Sunday’s race with co-driver Thomas Merrill.

DXDT team owner David Askew and his co-driver Ryan Dalziel still look for their first GT World Challenge Pro-Am victory but ran competitively at Indy last year before losing a wheel late in the race. Scott Smithson joins Askew and Dalziel in the No. 63 as the team’s third driver for the 8 Hour.

The No. 89 Mercedes-AMG Team AKKA ASP Mercedes-AMG GT3 will be co-driven by the winning and experienced trio of Timur Boguslavskiy, Daniel Juncadella and Raffaele Marciello.

Familiar teammates Maro Engel and Luca Stolz will co-drive with Jules Gounon in the No. 99 Mercedes-AMG Team Craft-Bamboo Mercedes-AMG GT3. The Indy 8 Hour is Craft-Bamboo’s first IGTC race of the season.

Wining Rolex 24 drivers Russell Ward and Philipp Ellis – who shared the Daytona victory with Engel and Indy Dontje – will be joined this weekend in the No. 33 Winward Racing Mercedes-AMG GT3 by Marvin Dienst, competing in the Silver Cup class.

Co-driving with Marciello and Stolz, Kenny Habul and Mikael Grenier finished a close second to Winward at Daytona in the No. 75 SunEnergy1 Racing Mercedes-AMG GT3. Habul and Grenier return in the No. 75 at Indy where they once again compete in the Pro-Am class with Martin Konrad. The SunEnergy1 trio drove the No. 75 to a third-place Pro-Am finish in last year’s 8 Hour.

The five Mercedes-AMG GT4 entries at Indy all compete in the season- ending doubleheader for the Pirelli GT4 America SprintX series that features twin 60-minute races today and Friday. In addition, RENNtech Motorsports fields both of its entries in the GT4 class in the GT America races.

Chris Cagnazzi drives his No. 39 RENNtech Motorsports Mercedes-AMG GT4 solo in GT America but will be joined by coach and co-driver Guy Cosmo for the SprintX rounds.

RENNtech’s second entry is Chris Gumprecht’s No. 79 Mercedes-AMG GT4 he shares with Kyle Marcelli in SprintX as well as driving on his own in GT America.

The lone Pirelli GT4 Am-class entry comes from Capstone Motorsports for co-drivers Jon Berry and Kris Wilson. Berry, who is part of the management team at Capstone, steps in for team owner John Allen for the second-straight race in the No. 16 Capstone Motorsports Mercedes-AMG GT4.

Christian Szymczak and Kenny Murillo co-drove the No. 72 Murillo Racing Mercedes-AMG GT4 to a pair of second place finishes two weeks ago at Sebring International Raceway to clinch the 2021 Pirelli GT4 Silver class team and driver championships a race early on the strength of five wins this season.

Conquest Racing West, and its young driving duo of Michai Stephens and Colin Mullan, have been the hottest team and driver combination in Pirelli GT4 in the final half of the season. Driving the No. 35 Conquest Racing West Mercedes-AMG GT4, Stephens and Mullan swept the overall victories and scored Silver-class honors in both rounds of the recent Sebring race.

The overall and Silver-class victories are the latest achievements in a run of five-straight podium finishes by the No. 35 team and drivers since debuting in both Pirelli GT4 and with Mercedes-AMG Motorsport Customer Racing just three race weekends ago at Road America in late August.

Raffaele Marciello, Driver – No. 89 Mercedes-AMG Team AKKA ASP Mercedes-AMG GT3: “I’m happy to be here in America. It’s always nice to come back to this famous race track at Indianapolis, and I cannot wait for the 8 Hour. I hope we can score a good result in the race and do really well with the Mercedes-AMG GT3. I feel quite confident and cannot wait to go on track.”

Russell Ward, Driver – No. 33 Winward Racing Mercedes-AMG GT3: “I’m a bit nervous, honestly, here at Indianapolis Motor Speedway. Once you’re in the car everything is fine, but I’m a bit nervous being at such an iconic place. This is one of the most famous race tracks in the United States and the world, and it’s a pleasure to be here, particularly with the biggest GT field in the U.S. history of the Intercontinental GT Challenge. Looking at the entry list, we have an incredibly strong lineup in the Silver class. I think as long as we don’t shoot ourselves in the foot, we’re going to have a good chance to win the Silver class, and if we play things right and get a little bit of luck, we could even be on the overall podium. It just all depends on how the race plays out. It’s going to be tight, there’s going to be some attrition, and it’s going to be fun.”

Colin Braun, Driver – No. 04 DXDT Racing Mercedes-AMG GT3: “I’m excited to be back at Indy. It’s definitely a special place. George, Ben and I love this place, and I think winning last year always helps a driver like a racetrack. The Mercedes-AMG GT3 was really competitive through the changing conditions, the different temperatures and the rain, and just the mixed conditions we had last year. This weekend looks similar to that, with different temperatures and different weather, so I think the Mercedes-AMG GT3 will be really strong. I know the DXDT guys have been working hard getting the car prepared and it’s a long race. With so many variables, including way more cars this year, it is going to make the traffic and how the race flows different than last year. There’s even a different track layout, they changed a couple of corners, and I’m looking forward to figuring it all out. It’s going to be a lot of fun. I know Mercedes-AMG Motorsport is well represented and hopefully we can finish it off strong and do them proud.”

Kenny Murillo, Driver – No. 72 Murillo Racing Mercedes-AMG GT4: “I’m really looking forward to the finale at Indianapolis. I have no experience at all at Indy, so it’s going to be a really big learning opportunity. I’m just really grateful for the whole year, running with Christian Szymczak, it’s been an amazing journey and it’s nice to go into Indy with a lot less stress. We’re just going to go out and have a really good time, and I’m really looking forward to being a part of Indy’s history. My first time here I was 15. I’ve never driven the track. I was working with my dad and doing tires for a Street Tuner (ST) car. After the race, we even get to come back to Indianapolis again for the champions celebration during the PRI Show. It’s a great opportunity at a great show and a great venue, and I’m looking forward to celebrating a lot of hard work that we did over the course of the year.”

Guy Cosmo, Driver – No. 39 RENNtech Motorsports Mercedes-AMG GT4: “We’re really excited for Indy. It’s the last hurrah for this season. We came into it late, but we’ve been making great strides. Chris has really been putting in an amazing effort behind the wheel and continuously improving. I’m really impressed with how he’s been in the car so far. He’s raced at Indy in the past several years ago, and I’ve tested there and driven there quite a bit, but I’ve never raced there. I’m looking forward to it because there are a lot of sections there that should suit the Mercedes- AMG GT4. There’s just one final chance to try to maximize what we’ve been working on all year and see if we can put it together and get us back on the podium.”

Virtual Mercedes-AMG Project ONE is the Star of the New Forza Horizon 5 Video Ga...