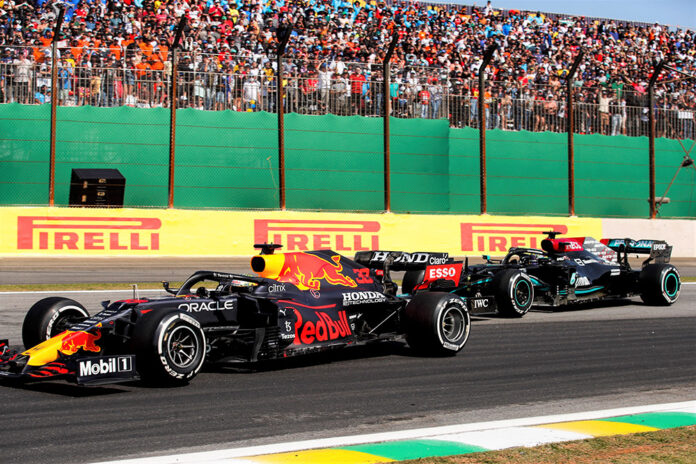 For the first time in Honda’s vast Formula 1 history, all four of its drivers started and finished in the same positions of a Grand Prix, but the quartet of Honda-powered pilots took vastly different paths to get there in an intriguing Brazilian Grand Prix.

Red Bull Racing Honda’s Max Verstappen used his second-place starting spot to race into the lead in the first turn of the 71-lap race, but settled for second after title rival Lewis Hamilton took the point on Lap 49. The result, when coupled with the two points that Verstappen gained in Saturday’s sprint qualifying race, allowed him to maintain a 14-point lead in the Formula 1 World Championship with three races left.

Sergio Perez vaulted from fourth on the grid to second on the first lap around the Interlagos circuit, following his Red Bull teammate for the first 18 laps before yielding to Hamilton’s charge. The Mexican driver dropped back to fourth during a pit stop during a Virtual Safety Car period, but pitted in the waning laps to get new tires and steal a vital championship point for running the fastest lap of the race.

Pierre Gasly started and finished seventh, scoring his third top-seven result in the last four races. The Scuderia AlphaTauri driver was among the earliest drivers to make his first pit stop and fought well to stay among the top 10 all day.

His teammate Yuki Tsunoda started and finished 15th, dropping to the back of the field after an ambitious pass attempt of Lance Stroll on Lap Four left his AlphaTauri in need of a new front wing. Undaunted and needing to overcome a 10-second penalty for causing a collision, Tsunoda rejoined the fight and climbed back to 15th at the checkered flag.

Verstappen carries a 14-point lead into next weekend’s Qatar Grand Prix, but today’s result dropped Red Bull Racing 11 points behind Mercedes for the lead in the Constructor’s Championship. Gasly’s result allowed AlphaTauri to remain tied with Alpine Renault for fifth in the standings as he finished ahead of both Alpine drivers.

Verstappen’s 15 podium finishes are the most ever posted in an F1 season by a Honda-powered driver, eclipsing the 14 podiums posted by Alain Prost in 1988. Prost’s 14 podiums did come in just 16 races however, in a season where he lost the championship to fellow Honda driver Ayrton Senna by just three points.

Next weekend’s trip to Qatar will end a stretch of three races in three weeks and will be the 20th on the 22-race calendar.

Toyoharu Tanabe
Technical Director, Honda F1
“It’s always disappointing not to win, but having Max finish second and Checo fourth at the end is still a good result and the points scored, including the additional one from Perez for fastest lap, will prove very important for the championship. Both Red Bulls got a good start to run first and second in the early stages, but Mercedes came back at us, proving what strong competitors they are. Once again, Pierre drove very well for Scuderia AlphaTauri, having a very close race with the team’s main championship rivals and thanks to the crucial passing moves on both Alpines to take seventh place, we are still equal on points with them. Yuki’s race was spoilt because he had to make an extra stop to change the nose after a collision and then he received a penalty for the incident. But his pace over the weekend was strong, so we expect him to fight back in the coming races. Now we go to Qatar for the final part of this triple-header. It is a new venue for everyone, so we have been working closely with both our teams as well as the Honda staff in Japan and the UK to prepare for the next race.”

Max Verstappen – Red Bull Racing Honda
Start 2nd, Finish: 2nd
“I knew today would be difficult, but I did everything I could, we were just lacking a little bit. At least it was a fun race, of course I would have liked to have won but realistically I think this was a good result. Lewis and I were fighting for position on multiple occasions, I think it was hard racing but good racing and that’s how it should be. I was hoping for a little bit more performance but this result is definitely the maximum we could do. Top speed wise it was tough to defend, you can clearly see when they take a fresh engine that it gives them a bit more power, so hopefully that will die down over the coming races. There are three races coming up that will be completely different again, so we’ll see how it goes.”

Sergio Perez – Red Bull Racing Honda
Start: 4th, Finish: 4th
It was close today and it was fun, but I am not here to have fun, I am here to deliver. I had a great start but then it was very difficult to hold Lewis back, I tried my best to hold onto him but I couldn’t, he was flying! Then we were ahead of Bottas, we had the position but two laps later the virtual safety car came in. That timing was extremely unlucky for us and it worked perfectly for him, he managed to do the undercut and then pull five seconds away from us. It is a shame we lost the podium but I was able to build a big enough gap to the Ferrari in fifth to pit and go for fastest lap, which is an important point for the team. Ultimately it is a good result for us today, I don’t believe there is much we could have done differently, it’s just a shame because we should have finished ahead of Bottas had it not been for the VSC. There are still three races to go and everything to play for so we will keep pushing. Now we look forward to Qatar and hopefully there we can be competitive.”

Pierre Gasly – Scuderia AlphaTauri Honda
Start: 7th, Finish: 7th
I’m really happy, it’s been a very intense race, but I think we can be pleased with today. There were some really nice battles, with Daniel (Ricciardo) and Seb (Vettel), then at the end of the race with the Alpines. It was so fun to be racing with them, as we don’t often get to do that in F1. It was of course hard, but today we finished in the best position we could, behind the top three teams, and that’s the most important thing, as we continue our fight for fifth.”

Yuki Tsunoda – Scuderia AlphaTauri Honda
Start: 15th, Finish: 15th
“I’m pretty frustrated after today. I think we made a good choice with the tires but unfortunately the collision with Stroll completely ruined my race. It was a risky move, but he just wasn’t looking in his mirrors and we came together. It’s a real shame I received the penalty, as I also struggled with damage for the rest of the race, but these things happen and we’ll work to come back stronger next time out.”