With the team’s first trip to the winner’s circle Tony Stewart joins an exclusive list of team owners with wins in both NHRA and NASCAR. 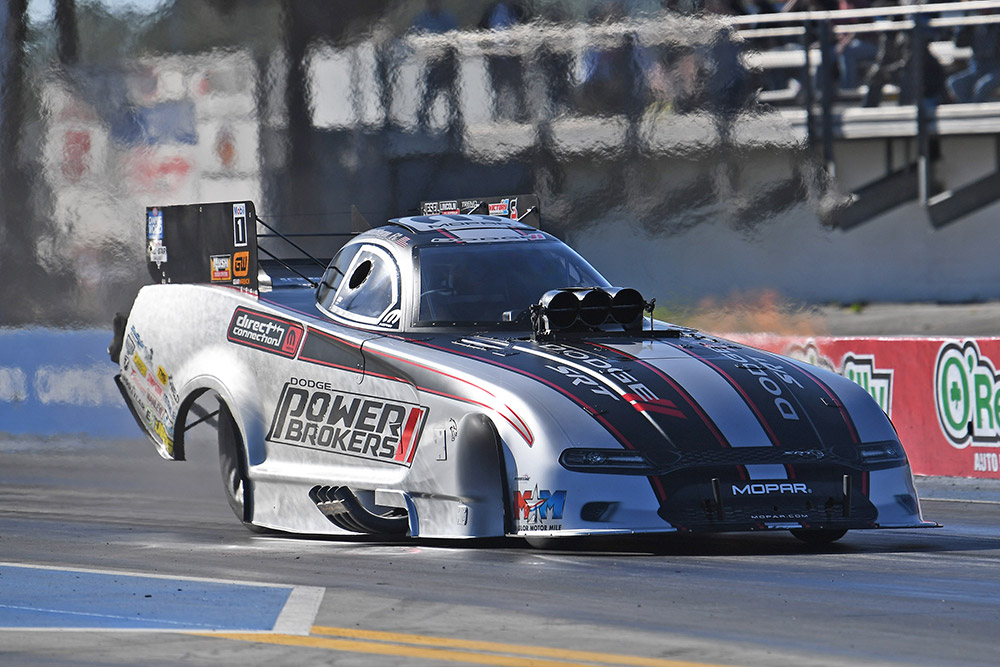 “Congratulations to Matt Hagan and the Tony Stewart Racing team for their first win of the 2022 season aboard the Dodge Power Brokers Funny Car at the NHRA Gatornationals,” said Tim Kuniskis, Dodge Brand Chief Executive Officer – Stellantis. “It’s great to see Matt earn his 40th career win and continue to demonstrate what Dodge//SRT performance looks like and what enthusiasts can expect from Dodge Power Brokers and Direct Connection.”

“Our NHRA Nitro team is appreciative of the long-standing relationship our drivers Matt Hagan and Leah Pruett have had with Dodge//SRT and Mopar,” said team owner Tony Stewart. “Everyone in racing knows the value of OEM support and its importance to a team’s success, so we’re pleased to have that relationship with Dodge in drag racing and how that quickly culminated in our first Funny Car win at the NHRA Gatornationals.”

After wet and unseasonably cold weather disrupted most of the weekend schedule and limited qualifying to just one session for the nitro categories, Hagan’s sole qualifying pass of 3.898 seconds at 320.13 mph put the Dodge Power Brokers Funny Car No. 4 on the eliminations ladder for the 53rd edition of the famed event.

His opening round pairing against No. 13 seed Dave Richards saw him launch his 11,000-horsepower machine off the line first, but an immediate loss of traction had Hagan skillfully pedaling it before regaining control and turning on the first win light. A solo run in the quarterfinals after Terry Haddock broke on the burnout was followed by a solid 3.894-second run at 332.84 mph to defeat Chad Green and advance to the final elimination. Hagan powered to a 3.910-second / 330.96 mph run aboard his Dodge Charger SRT Hellcat to defeat No. 6 seed Blake Alexander and earn the win he had been looking forward to providing his new team and the trophy he had yearned for.

“To get this first win at the Gatornationals and Tony Stewart’s first win in a drag car, it’s pretty awesome,” said the three-time NHRA Funny Car World Champion. “He wants to be here, and it says a lot for our sport. It was a good weekend for Tony, a good weekend for NHRA and I’m just very blessed and humbled to be here. I want to make sure I’m showing up on the starting line and doing my part and I just know what this team is capable of. It’s a lot of tough competition, but as a driver that’s exciting.

“It just was a big weekend for me personally because I’ve been wanting to win this race and check it off on my career box, and I think this allows me to accomplish everything I’ve ever set out to do in NHRA.”

Sunday’s action asl saw No. 3 qualifier Cruz Pedregon take his Snap-On Tools Dodge Charger SRT Hellcat Funny Car for another solid drive recording a 3.914-second run at 326.95 mph in the opening round to turn the win lights on against No. 14 seed Jim Campbell and advance to the quarter finals. Pedregon staged his HEMI-powered machine next to No. 6 seed Blake Alexander, but hit the throttle too soon, turning on the red-light and ending his run through eliminations.

With weather delays and the shortening of Top Fuel qualifying to just one session, the remaining two elimination rounds of the Pep Boys NHRA Top Fuel All-Star Callout has been rescheduled to take place at the Dodge Power Brokers U.S. Nationals in Indianapolis in September. Unfortunately, TSR pilot Leah Pruett’s traction issues in the first round of the specialty race eliminated her from advancing and also meant that her sole qualifying lap aboard the Dodge Power Brokers dragster wasn’t going to provide her the chance to stage for the elimination rounds. The team will refocus their efforts on the upcoming NHRA Four-Wide Nationals set to take place at The Strip at Las Vegas Motor Speedway April 1-3.

Record-breaking performances in the only Constant Aviation Factory Stock Showdown (FSS) qualifying session on Saturday were highlighted by the 2021 Dodge Challenger Mopar Drag Pak setting the category’s quickest and fastest run ever. An impressive 7.608-second elapsed time pass at 183.15 mph by Mark Pawuk and his Empaco Equipment Mopar Drag Pak reset both ends of the national record and put him in the No. 1 qualifier position.

Pawuk’s HEMI-powered machine had a red-light start in the quarterfinals to end his day, while No. 3 qualifier Warren Walcher advanced his 2021 Mopar Drag Pak to the semi finals in just his second FSS competition after his posting his own impressive qualifying performance(7.669 sec./180.79 mph) which also was quicker than the previous national elapsed time record (7.718 seconds). Ultimately, Walcher’s efforts were all for not when a technical issue hampered his team’s ability to make the call to stage for another round of competition.

“I have to say the Gators (Gatornationals) definitely got us. When we went up there for the Pep Boys All-Star Top Fuel Callout, we went to race, compete and throw down a low 70s or high 60s number. Ultimately, we just didn’t have enough power and that goes back to our database. The positive side of that is we have already regrouped and found the issues. We have a positive mindset as a team. When you have something so early on that you can identify, you can infuse hope and faith into the power plans that we have. It is unfortunate because we didn’t realize that one run would be the final qualifying session. There are a couple of other big teams that also didn’t qualify with their one hit wonder. This is not a one team wonder by any means. We will figure it out, it’s just going to take laps. I truly have all the faith in this team and we will get our round wins.”

“It was just a matter of time before we got this [first] win. Not to brag or boast, but [Crew Chief Dickie Venables] is a genius. Dickie can do things with a race car and just go off of his gut instinct and the things that he does is just phenomenal. When you look at the stats and the numbers, we basically won more races together than anybody else in the last 10 years. It’s chemistry. You can’t buy it. You click and work together and we have a group of individuals that are driven and goal oriented. It’s exciting for me. It’s one of those things where, when it’s good, it’s just really good, and that’s what we have here with our team.
“There was definitely a different kind of feel to it today because the air was different and the track was different, and a lot of these big hitting cars couldn’t pull their stuff back enough (dial back their cars for the conditions to maintain traction). It’s a testament to Dickie Venables, Mike Knudson and Alex Conaway and what they did to reel my car back in when we were out there. I know we might kind of be in trouble when Robert [Hight] smoked them at the first hit. And then, then we went up there and I had to pedal it to get it to the finish line. [They] did a great job this weekend putting a good race car underneath me to go down the racetrack.”

“The Snap-on Tools Dodge Charger SRT Hellcat was flawless in qualifying with a strong 3.89 second run at 327 mph in our only run to prepare for race day. Our opening round 3.91-second run was nice and smooth but then I left too soon and fouled out in the quarterfinals. We’ll focus our attention on the next race in a couple of weeks for the Las Vegas Four-Wide.”