An event as special as the Rolex Monterey Motorsports Reunion deserves a poster fitting of its prestige. Luckily, California native Kelly Telfer is familiar with both WeatherTech Raceway Laguna Seca and Trans-Am era racers. Telfer, a third-generation C … 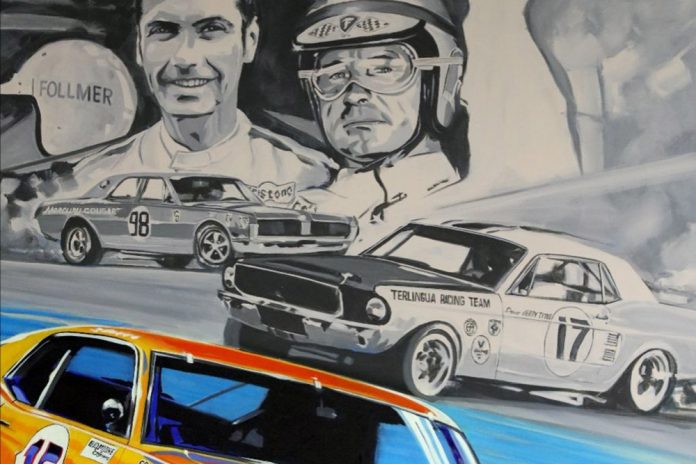 An event as special as the Rolex Monterey Motorsports Reunion deserves a poster fitting of its prestige. Luckily, California native Kelly Telfer is familiar with both WeatherTech Raceway Laguna Seca and Trans-Am era racers.

Telfer recalled his inaugural experience with WeatherTech Raceway – the first car race he attended as a child – in the early 1960s.

“My dad was a volunteer corner worker at the original Turn 3. I was sitting on a blanket on the race track side of the old 3-foot-tall wooden snow fencing during practice and one of the drivers spun into the dirt right in front of me. My dad and another corner worker push-started the race car, and the driver (I think it was Stirling Moss), looked over at me and winked and said ‘Slippery, eh?’ Boy, was I hooked on racing from then on.” – Kelly Telfer

Jones won the 1963 Indianapolis 500 as a driver, and then won it twice as an owner, in 1970-71, with driver Al Unser Jr. He is also closely associated with the famous No. 15 Ford Mustang Boss 302. Jones had numerous wins using the familiar Bud Moore orange Ford in 1970, en route to capturing the Trans-Am championship that year. Jones retired with six IndyCar wins and four wins in 34 NASCAR starts. He is inducted into more than 20 Halls of Fame.

“This poster is the perfect tribute to both Ford in Trans-Am and two of the men who were instrumental in popularizing those powerful Fords in their heyday,” said John Narigi, president and general manager of WeatherTech Raceway Laguna Seca. “WeatherTech Raceway has a rich tradition with Trans-Am, first hosting the series in 1969, and this poster puts it into artform.”

The Rolex Monterey Motorsports Reunion, taking place Aug. 12-15, will feature every era of motorsport dating as far back as 1910. These carefully selected authentic and historic race cars are part of the celebration of history by returning to the race track to compete as they once did. Visitors will be able to experience history up close in the open race paddock or watching the cars challenge the equally historic road course nestled in the Monterey hillside.

Full ticket packages, from single day tickets to comprehensive VIP experiences, are available online at WeatherTechRaceway.com or by calling WeatherTech Raceway Laguna Seca’s guest relations associates at (831) 242-8200. For added visitor convenience, the Laguna Seca Recreation Area campground has some campsites remaining. Tickets for the event can be found here.