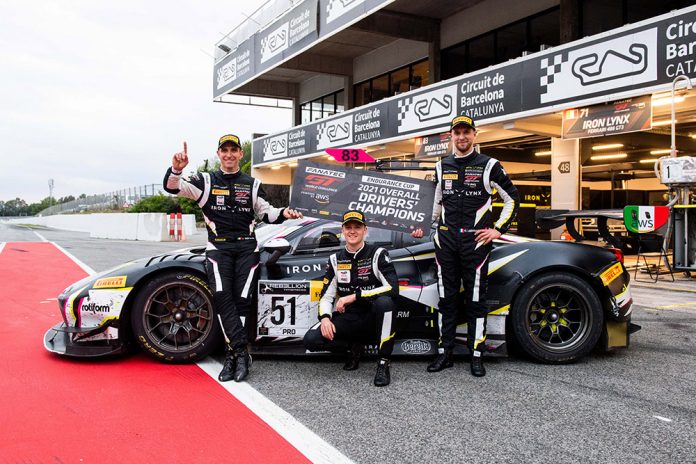 After qualifying in eleventh place overall, the #51 Ferrari 488 GT3 Evo of Nicklas Nielsen, Côme Ledogar and Alessandro Pier Guidi battled hard to finish the three-hour race in seventh position overall. The strong points finish, built upon the trio’s consistent points haul over the course of the season, which included overall victory in the 24 Hours of Spa. Indeed, the important championship points scored in the electrifying season finale were enough to give the trio an unassailable lead.

Meanwhile in just their second foray into the GT World Challenge Endurance Cup, the #83 Iron Dames car of Sarah Bovy, Doriane Pin and Michelle Gatting which qualified ninth in class, put in an impressive and consistent performance to finish sixth in class.

The third Iron Lynx Ferrari competing, the #71 car of Callum Ilott, Alessio Rovera and Antonio Fuoco had a disappointing conclusion to the race. After qualifying fifth in class and running among the front runners for most of the race, the car suffered a puncture with just 10 minutes to go forcing its retirement from a strong position.

Commenting on the race and Championship victory, Iron Lynx team principal, Giacomo Piccini, said: “What an amazing and nail biting conclusion to the championship! Our congratulations of course go to Nicklas, Côme and Alessandro, but I would also like to thank all of the other drivers and members of the team for their contributions throughout the season. We’re thrilled and extremely proud for this special victory.”

In addition to the on-track excitement in Barcelona, the next generation of Iron Lynx drivers were competing in the penultimate round of the Italian Formula 4 Championship at Mugello. After shining in qualifying with two first row positions, Italian Leonardo Fornaroli put in one of the displays of the weekend, securing second place in race three along with the fastest lap time of the afternoon and consolidating his third place in the championship standing.