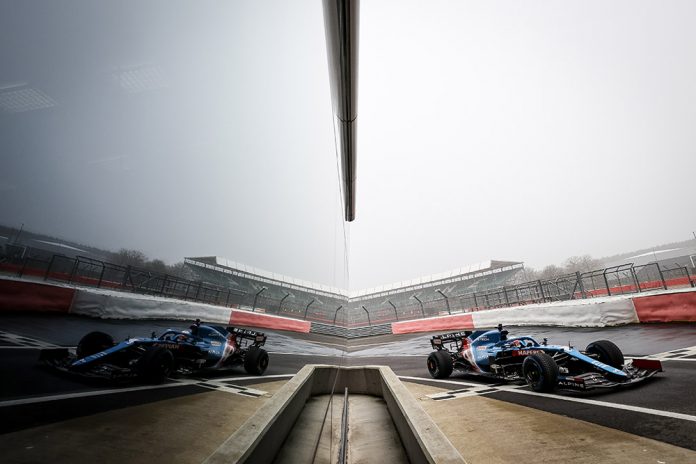 The team is gearing up for its second home race of the season as Formula 1 heads to Silverstone for the British Grand Prix. With fans in the stands and an all new qualifying format to trial, Executive Director Marcin Budkowski explains his thoughts on this weekend’s race.

What challenges does the new Sprint Qualifying format bring this weekend?

We’re looking forward to trialling the new race weekend format for the very first time this weekend in Silverstone. It’s definitely something new and will create some action on all three days. For the teams, the main challenge will be to setup the cars and build the drivers’ confidence in one hour of practice on Friday morning only, as we then go straight into Qualifying. The cars will be in parc ferme from that point onwards, which means we can’t really touch them anymore. There are also different rules for tyre usage, including free choice for the race itself. We expect the new format to bring more uncertainty as some teams will get it right and others might not, which could mix the grid up and create more on-track action. Teams hate unpredictability as they always try to optimise everything to perfection, but it should be more exciting for the fans!

How much is the team looking forward to its home Grand Prix?

It’s great to be racing close to the factory in Enstone. It means a lot of our team members will attend the race in the grandstands with their families. In general, it’s really good to have fans back, we enjoyed the atmosphere in Austria at the last race. We expect a big crowd at Silverstone, and British fans are hugely passionate and knowledgeable about Formula 1, so we hope to put on a good show for them.

What is the team doing to help improve Esteban’s current performance?

Esteban had two difficult races in Austria and we’re still investigating whether there are any technical reasons behind it. To eradicate any doubt, the team has made the decision to make extensive changes to his car for Silverstone, including a new chassis. Esteban performed very strongly at the start of the season and qualified the car on the third row of the grid on merit at two races in a row just a few weekends ago, so we are working together to make sure he bounces back, and this weekend is the perfect opportunity to do that.

How does the team reflect on its general performance level ahead of Silverstone?

The car was competitive in Austria, but the race result did not reflect our potential. Fernando had strong pace in qualifying and the race, but we weren’t able to convert it into bigger points because of the incident in Qualifying. Silverstone, though, is a completely different challenge. It’s an exciting track with a lot of high-speed corners that drivers enjoy racing at. The weather can be a factor there, and with the new format, it’s shaping up to be a very interesting weekend!

Silverstone is an iconic circuit in Formula 1. Everything about Silverstone is associated with what Formula 1 is about, like all the history there and the legendary corner combinations it has. The run through Maggots, Becketts and Chapel is very special. In a Formula 1 car, that’s about as good as it gets through the whole year and going flat out through that sequence is a fantastic feeling. The track is challenging as it’s all about keeping momentum and putting everything together in a good rhythm. It’s going to be cool to see all the fans there and having their support this year. I’m looking forward to experiencing that.

What moments stand out for you at Silverstone?

I’ve always loved racing there. In Formula 3 in 2014 I was on pole position, took three podiums and won a race. I was also on the podium there in GP3, so I do have some nice memories of Silverstone. In Formula 1, I’ve been in the points there a number of times. Last year, with the two races, we had competitive weekends as a team with some good results. Of course, the aim is to repeat that this weekend.

Are you looking forward to the Sprint Qualifying?

The Sprint Qualifying is certainly going to freshen up the race weekend. It brings a new dynamic to the event, so I’m interested to see how it will unfold. Before that, though, we have to plan a productive Free Practice and then make sure we’re as far up the grid as possible in qualifying on the same day. It’s going to be different to usual, but I like the idea and I’m looking forward to seeing how it will go.

How are you aiming to comeback after the recent frustrations?

The France-Austria triple header was not as successful as we had hoped. It’s good that we’re heading to a completely different circuit, taking on a new challenge and having a reset. The team and I have been working very hard behind the scenes to see what we can do to improve our performance. I know we’ll come back to the level we had at the start of the season and the hard work will only continue until we achieve that and even go beyond. I’m really motivated for a good result this weekend.

It was a fourth points finish in a row last time out in Austria, how do you reflect on the second race of the season there?

I was happy to come away with a point in the end after a frustrating qualifying session where we had the pace to do much better. The car felt good across all three days so this is a positive we must take forward with us to Silverstone. It will be a different race at Silverstone, and I suspect the gaps between the field won’t be as close as they were in Austria due to the nature of the lap. The car felt good during the three races in France and Austria so I feel confident we can be competitive here this weekend.

You’ve had some good memories racing at Silverstone, most notably your pole position, race win and fastest lap in 2006. Do you enjoy racing there?

It’s a fantastic circuit and always provides us drivers with good racing. I’ve had some memorable results there, with my win in 2006 for Renault one of the best memories. There is a good mix of high and medium speed corners and, of course, the weather can be variable so it should be an interesting weekend. It’s good to be at the team’s other home Grand Prix and with it being so close to Enstone, I will be visiting the factory before the race.

What’s your favourite part of the Silverstone circuit?

I enjoy most of the circuit but if I had to choose one part it would be the high-speed middle sector from Copse through to Maggotts and Becketts. Taking this section at such speed and high levels of grip in a modern Formula 1 car is thrilling as a driver. It’s quite harsh on tyres there due to the fast-flowing corners so that will be something we will need to manage over the weekend. It will also be great to see fans in the grandstands as it has a very special atmosphere.

Zhou, Piastri and Lundgaard back behind the wheel as Formula 2 returns Alpine Academy trio Guanyu Zhou, Oscar Piastri and Christian Lundgaard are in FIA Formula 2 action this weekend as the series heads to Silverstone for round four.

Zhou leads the 2021 championship after claiming a fourth podium last time out in Baku. Oscar is Zhou’s closest challenger in second place following his podium in the Feature Race in the Azerbaijan capital.

Christian returned to the points in the last race as he targets an upturn in form to get his season back on track.

It’s been a busy week for Zhou after he made his debut on a Formula 1 weekend after taking over Fernando Alonso’s A521 in Free Practice 1 in the Austrian Grand Prix.

Guanyu Zhou: “It’s been a great last two weeks for me after having my first taste in Formula 1 in FP1 with the team. That was a great experience but, now, I’m back focusing on my Formula 2 season. I’m looking forward to Silverstone. It’s a circuit, as a team, we’ve been strong at in the past. I had my first pole position there in Formula 2 in 2019, so it’s a track I love driving at. Sector two is a lot of fun and somewhere you can make a lot of lap-time. It’s all about adding up little details, which count for a lot, and you have to be precise. I’m aiming for a solid weekend.”

Oscar Piastri: “I’m super excited to go racing at Silverstone as it’s a track where I’ve had success in the past. It’s been a long gap since Baku, so I’m keen to go racing again, and there’s very few places better to go to than Silverstone. I’ll be looking to use my R.S.18 test knowledge to get me out of the blocks quickly, and hopefully we can continue building momentum on what’s been a strong opening part of the championship.”

Christian Lundgaard: “Silverstone was one of the better race weekends for us in 2020, so I’m looking forward to racing there this weekend. We have a great package and, obviously, we need to improve our current performance from the previous two street races. At a conventional circuit like Bahrain earlier in the season, we had decent pace, especially in qualifying. We need to carry on improving and delivering this weekend and I’m quite confident we can do so. The car is feeling good, we can achieve great things, so let’s go get them.”

By: alpine | Photos Courtesy of: Alpine