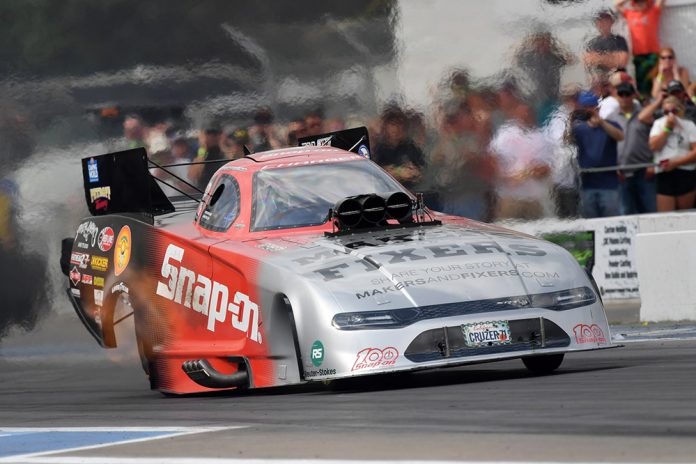 After qualifying No. 4 on the eliminations ladder, Hagan put together a string of consistent runs and round wins over Dale Creasy Jr., Paul Lee and Bob Tasca III to advance to his 69th career final round. That paired him with No. 2 qualifier Pedregon and his hard charging Snap-on Tools Dodge Charger SRT Hellcat for their first final round showdown in over ten years.

Hagan’s quick 0.051-second reaction time gave the DSR Mopar Dodge Charger SRT Hellcat an early lead from which he never looked back on his way to a 3.923 second elapsed time run at 327.98 mph to defeat Pedregon’s 0.106-second light and solid 3.935 sec./324.83 mph pass and capture his second win in five national events. 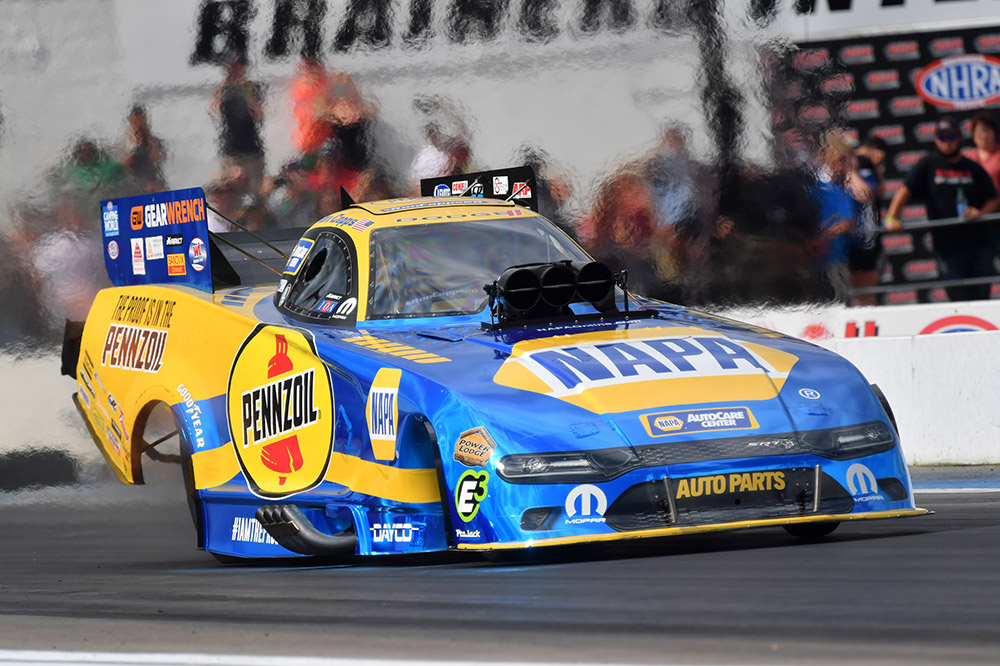 Hagan’s two victories this season were both “firsts” in that they were both earned at venues at which he had never won. Earning the coveted Wally at the Dodge//SRT Mile-High Nationals in July and Sunday’s drive to the winner’s circle at Brainerd helped propel the defending NHRA Funny Car World Champion into the points lead for the first time this season with just one event remaining for racers to lock themselves into the “Countdown to the Championship” playoff.

That last race of the regular season will be the 68th edition of the NHRA’s cornerstone event and world’s biggest drag-racing competition – the Dodge//SRT U.S. Nationals in Indianapolis on Labor Day weekend.

For their part, the Cruz Pedregon Racing team and the Snap-on Tools Dodge Charger SRT Hellcat have shown season-long consistent and steady improvement that included a win at the Norwalk event in June. Following up his semifinal appearance last weekend in Topeka, Kansas, Pedregon put his HEMI-powered ride No. 2 on the eliminations ladder with a career best 3.874-second pass at 324.67 mph.

He then continued to impress with hard fought side-by side battles and round wins over Gary Densham, defending event champ Ron Capps and J.R. Todd with a series of 3.9-second runs (3.907/3.908/3.933) before adding another 3.935 effort in his loss to Hagan. With his runner-up finish, Pedregon remains eighth on the Funny Car leaderboard heading with one regular season event left. 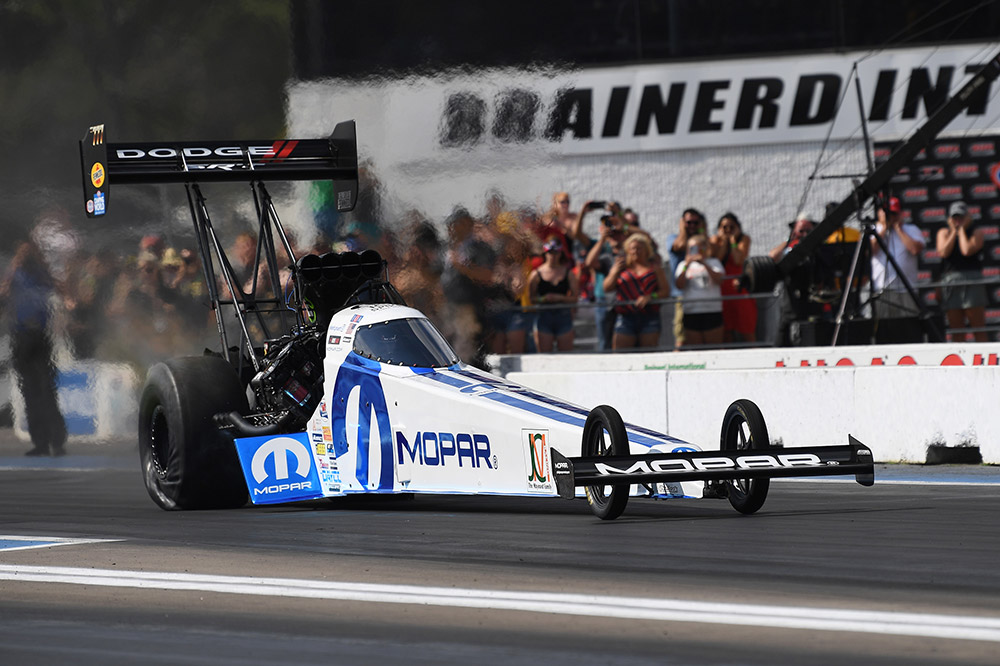 DSR driver of the Pennzoil Synthetics/NAPA AUTO PARTS Dodge Charger SRT Hellcat, Capps, qualified in the top half of the eliminations ladder for the 11th time in 12 events. The six-time and defending Brainerd champ was seeded seventh and lined up next to No. 10 John Force to kick off race day. Capps had the quicker start and a solid 3.953-second lap to turn on win lights against Force who had trouble early in his run.

Capps’ quarterfinal match-up with Pedregon was a terrific side-by-side battle from start to finish with nearly identical launches – a 0.076-second reaction time to Pedregon’s 0.075 – and identical speeds at 325.45 mph, with the only difference coming at the stripe with Capps’ 3.935-second lap to Pedregon 3.908-second winning run. Capps leaves Brainerd ranked fifth in the Funny Car standings but less than one round out from the leader.

Also a defending event winner at Brainerd International Raceway, DSR’s Top Fuel pilot Leah Pruett kicked off qualifying looking strong and posting the second-best pass of the Q1 session. With what ended up being her quickest run of the weekend, a 3.789 second pass at 319.90 mph aboard her Mopar Dodge//SRT dragster, Pruett’s best qualifying lap also gave her a berth into the NHRA’s 2021 “Countdown to the Championship” ensuring she’ll finish the season in the Top 10 for a sixth consecutive year. While subsequent qualifying runs were hampered by a few issues that the DSR team worked to get resolved by race time, her first qualifying lap was good enough to put her eighth on the eliminations ladder.

Pruett rolled her HEMI-powered machine to the start line for a first round matchup with No. 5 seed Justin Ashley, but saw her hopes of defending her event title go up in tire smoke right off the hit of the throttle. With just one event left before the playoffs begin, Pruett remains fourth in Top Fuel standings. 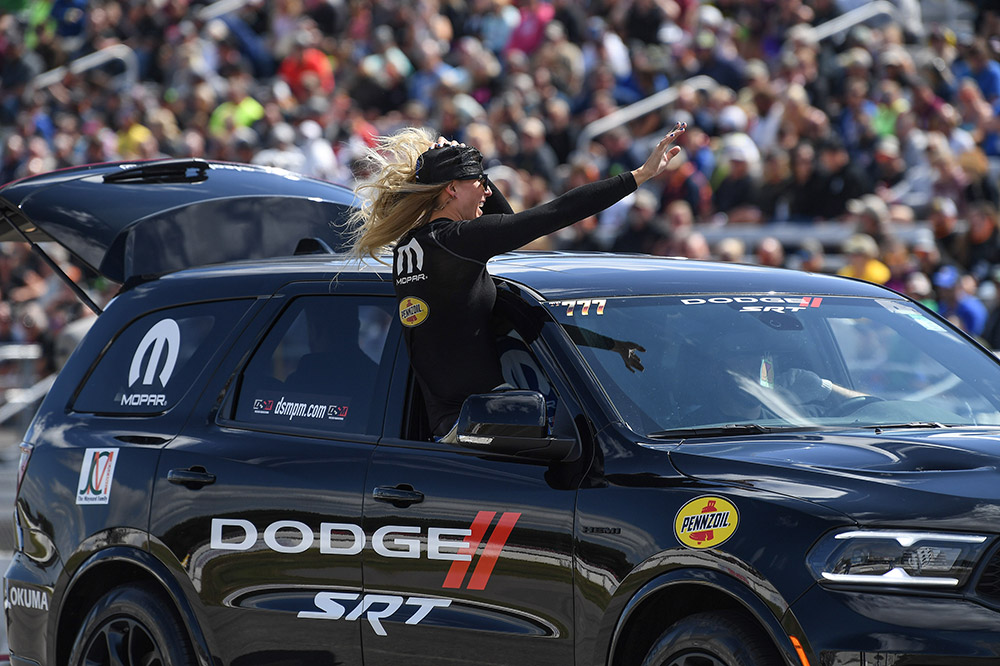 The NHRA Camping World Series now prepares to head to drag racing’s most prestigious event, the Dodge//SRT U.S. Nationals at Indianapolis, September 1-5, which features a unique points-and-a-half format and will see racers jostling for position before the points are reset and the field tightens heading into the “Countdown to the Championship” playoffs.

“I’ve been racing for so long, and it’s great to knock this one off the list and add a Brainerd trophy to the shelf. We want to win every race, and at every race track, so I’m especially glad we got it done today. We’re trying to get where we should be. After coming off of such a strong championship run last year, you come out and expect to set the world on fire, and we just haven’t been able to do that. But (Crew Chief) Dickie Venables, you give the guy enough shots at the race track, he’s a bad man. I just want to do my job up there. I really pride myself in leaving the starting line really well, and it’s going to take these tough packages. You’re going to have leave good, and you’re going to have to race good, and that’s what we’re doing with this Mopar Dodge Charger SRT Hellcat.”

“We always talk about Brainerd being such a pivotal race heading into the Countdown. We have Indy coming up and that’s points and a half, but Brainerd always plays a huge role because it’s the second-to-last race before heading into the Countdown. You’ve got to come out of Brainerd with a good race car. We didn’t make up as many points as we wanted to this weekend, but we have a great race car. Dean Antonelli and John Medlen have been really focusing on clutch-wear these past couple of races, and we were really happy to run a .93 in the right lane, we just got beat by a quicker car in the left lane this weekend. The NAPA team did a great job, and it was fun carrying the Pennzoil colors again this weekend. Now we have a week off to focus on Indianapolis and the playoffs. Right now, the fans are getting a really good taste of what the Countdown to the Championship will be like this year. Not only are the points close right now, but the performance of the cars in the Funny Car category right now is something to behold.”

“Great weekend overall for the Snap-on Tools Dodge Charger SRT Hellcat. To qualify in the second qualifying position with a career best 3.87 (second run) and then hammer out four runs in the 3.9-second range which were incredibly consistent runs in eliminations was very positive. Especially given that the track was a little warmer today than yesterday. It was just a strong effort all the way around and it shows that we’re coming into our own here going into the big race at the Dodge//SRT U.S. Nationals. We’re not going to hang our heads because that was a close race in that final with (Matt) Hagan. You know I’d like to have that reaction time back a little bit. I miss the tree there a bit but overall it was just a solid effort by the team. I’m just proud of the guys.”

“I’m not sure if there’s an amusement park here at Brainerd, but we sure feel like we’re on a roller coaster with this season of highs and lows. I’ve said it before and I’ll say it again, the number of runs for the team to stay on track is crucial. So, when we lost our third qualifying session lap to a mechanical malfunction, we were robbed of an opportunity to learn this tune-up and get better. What we had for Q3 is pretty much what we had for E1, and that’s a high sixty run and we were just outside of that window. The goal was to turn on win lights. We will not test before Indy’s Dodge//SRT NHRA U.S. Nationals, but we are real close to breaking through again and we have the confidence to do it. We appreciate the great fan support this weekend at Brainerd for our Mopar Dodge//SRT team and now we focus on Indy and the Countdown.”