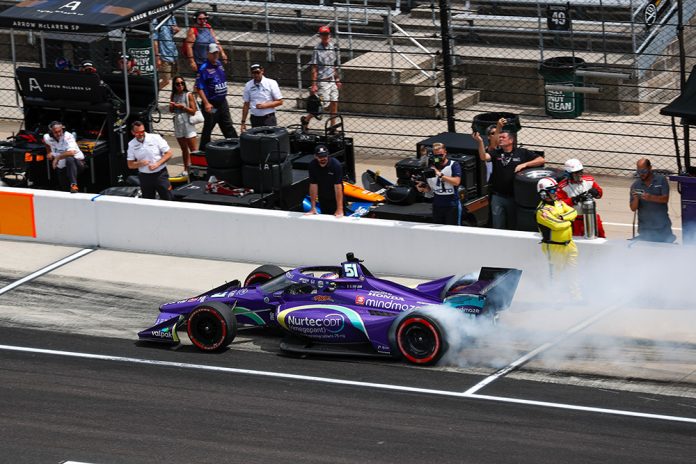 Romain Grosjean and Colton Herta scored a double podium finish for Honda this weekend on the road course at the Indianapolis Motor Speedway – with Grosjean taking second in his #51 Dale Coyne Racing with RWR Honda, ahead of Herta’s #26 Andretti Autosport Honda in third.

Grosjean started the Big Machine Spiked Coolers Grand Prix in the third position, dropping back behind Herta during the first pit sequence. Running third and fourth, Herta and Grosjean would work their way around the #5 of Pato O’Ward during the next stint, utilizing their [softer compound Firestone] “Red” tires to pass O’Ward.

The first full-course caution of the race gave Grosjean his chance to get around Herta on the restart with 14 laps to go. The NTT INDYCAR SERIES rookie, and former F1 driver was able to hold off the charge from the young Californian during a second restart, but neither had the power-to-pass to catch race leader Will Power.

NTT INDYCAR SERIES championship leader Alex Palou suffered a mechanical issue, forcing him out of the race with 18 laps to go. However, the two-time race-winner this season maintains a 21-point championship lead.

Romain Grosjean (#51 Dale Coyne Racing with RWR Honda) Started third, finished second:
“It was a good race. We tried everything we could [to win], but Will [Power, race winner] was very fast in front today, and we just couldn’t quite get him. But we had a great race with Colton [Herta, for second]. He’s a driver that you know is going to leave you just enough room so you can go for it and race each other. I’m happy for the team, and as always, proud to be powered by Honda. My kids are here, and got to see me finish on the podium. What could be better?”

Colton Herta (#26 Andretti Autosport Honda) Started fifth, finished third: “Third place was really good for us today. We really didn’t have the pace [to win]. The car was fairly good, but there’s still stuff we can improve on here [at Indianapolis] to win. But it was a really good job by the team. We turned this car around from 26th in practice to a podium finish today, so that was a spectacular job. Really happy with the result, really happy to be powered by Honda.”

Kelvin Fu (Director Program Management, Honda Performance Development) on today’s podium finishes in Indianapolis: “A double podium finish is always great, and getting three of the top five, seven of the top 10, just shows how strong we have been here at Indy. It was fantastic to see Romain celebrate second with his family, and for Colton to bounce back for a podium finish after Nashville—he had a really strong run. Also nice to see Alexander Rossi battling in the top-five today, really great job by that team. It was disappointing that we let Palou down during the race, it’s not the standard we expect from ourselves at Honda and we will investigate the root cause of the issue. But, that aside, it’s been a great weekend here for Honda and we’re excited to go on to World Wide Technology Raceway.”