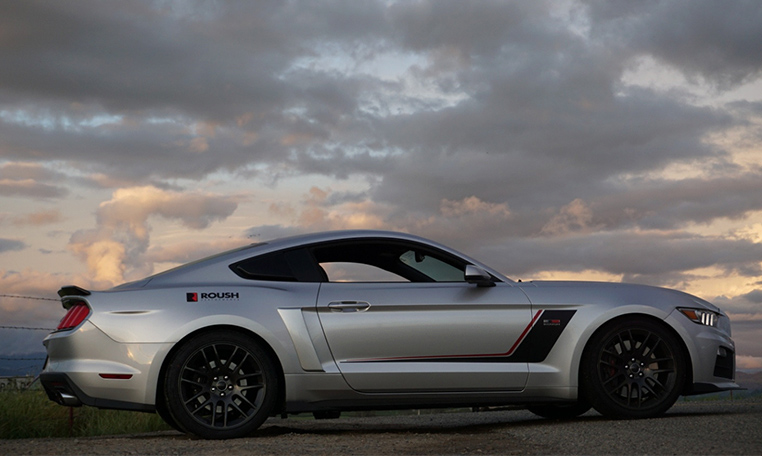 Slicing through the California countryside, the 2017 Roush Performance Stage 3 Mustang is clearly something unique. It is visually striking and the throaty V-8 commands attention. It turns heads and even those unfamiliar with the Roush name are compelled to take a closer look.

Speed Journal team Principal Jeff Francis recently spent a week trying on the Roush Stage 3 (known more commonly by the shorthand “RS3”) for size. Armed with decades of Mustang ownership and track experience, Francis was curious to know whether the RS3 retained the core elements of the Mustang or whether the RS3 traced its own path.

The answer is that it checks both boxes.

Francis had the opportunity to run the car on the freeway, the twisties, the track and also introduced it to others. The RS3 was a guest in a gathering of exotics referred to as the “Piston Pushers” including Porsches, Lamborghinis, and even a McLaren MSO High Sport. The RS3 also joined brethren of the Ford blue oval the following day in a conga line of NINE Ford GT siblings on a run into the foothills. It may not be a six-figure supercar but the car enthusiasts and exotic owners recognized the RS3 and appreciated it as something unique. 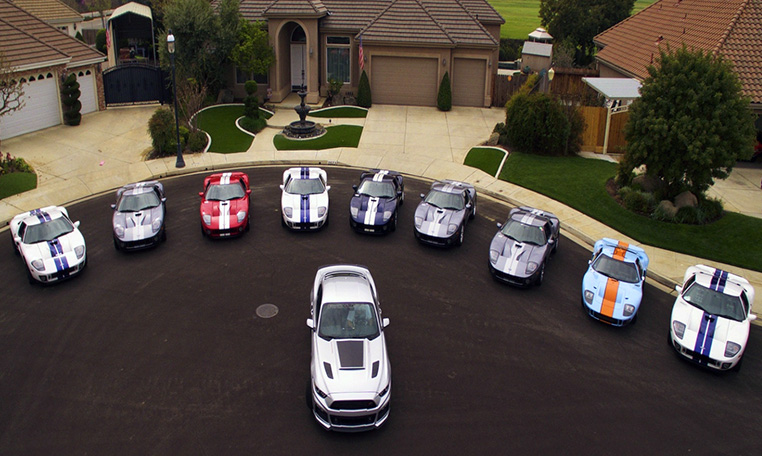 While many might be familiar with the Roush name from NASCAR racing, the ties between Roush and Ford go much deeper.

Jack Roush has bought, driven, restored, collected, developed, and raced Mustangs for decades. He has restored Mustangs with his kids and integrated them into the business. In the 1980s and 1990s, Roush Racing Mustangs owned victory lanes at race tracks across the land. Drivers like Mark Martin, Robby Gordon, Tommy Kendall and even Paul Newman found success in the endurance classics of places like Daytona and Sebring. Kendall also claimed three straight Trans-Am titles and literally re-wrote the record books in his black and green machine. That would be an impressive history alone, but the Roush resume also adds thirty years of NASCAR racing success as well.

Regardless, when finding himself in a car with Ford roots and Roush enhancements, Francis instantly connected with those years of history, knowledge and experience that make the car and the drive a special experience. 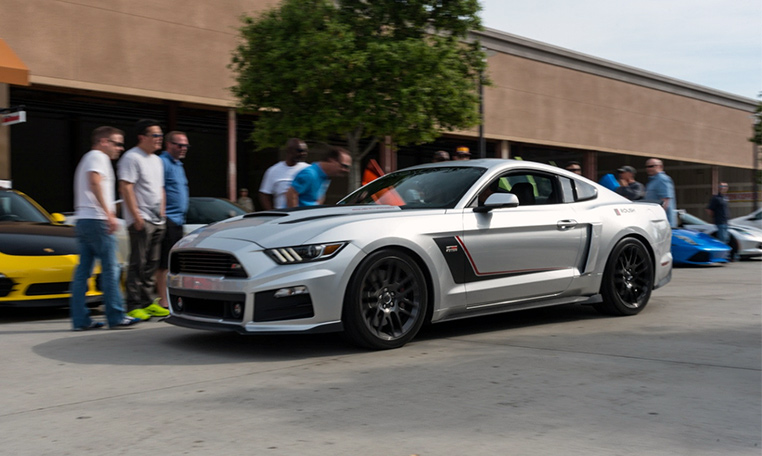 When Francis returned his borrowed RS3 to the team at Galpin Ford in Los Angeles, three things stuck in his mind as memorable. First, the presence of the car – both visually and audibly – made the car a unique experience. He loved hearing the exhaust note and the car turned heads. Second, the amount of power and how quickly it was accessible made the car a joy to drive. Third, even if you close your eyes, the RS3 clearly retains Mustang DNA. The car will be familiar to Mustang owners and enthusiasts but it just provides more – more aggressive styling cues, more handling and more power.

So, what is it like to steer the RS3 with its 670 horsepower and 1.07g of grip? As you might imagine, it has plenty of performance. The power ensures that you won’t lack for power at the dragstrip, but the grip ensures that you can throw it around on mountain curves or on a road course race track. The Roush Performance RS3 strives to occupy the space between road car and race car. 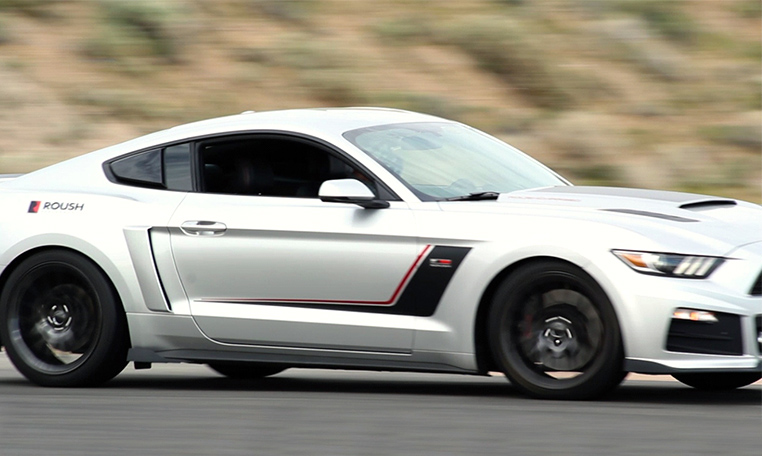 The stiffer suspension transmits the terrain of the road more directly than the standard Mustang but it is not spine-jarring. The car is docile enough that it could be a daily driver as easily as it could be a weekend toy. 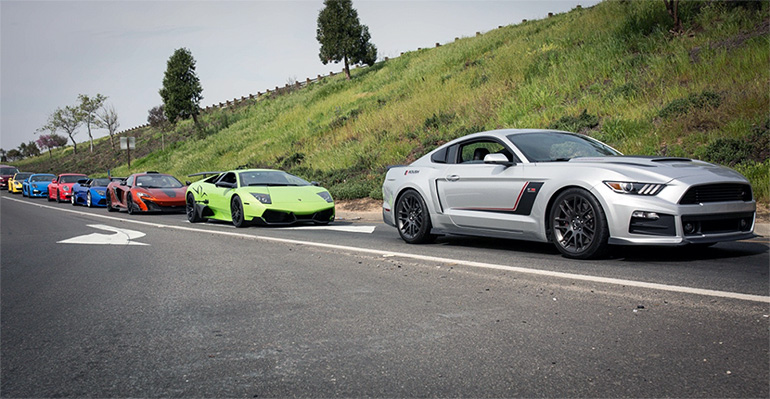 One of the most visceral features of the RS3 is the symphony from the engine and exhaust. A dial to the driver’s right of the shifter dials the volume up or down. The quad tip exhaust provides four settings for the soundtrack of your choice – Touring, Sport, Track and Custom. Touring mode is the quietest of the four – perfect for early morning departures and late evening arrivals to avoid neighborhood unrest. Track mode fully opens the exhaust baffles for the full V-8 rumble experience. Sport mode splits the difference.

For those inclined to dabble, the Active Performance exhaust system also gives the ability to customize the sound via an app installed on your mobile device. It is an interesting feature and can be more than just a fun gadget. Want to tune the exhaust noise for your own preference on the highway? Want to map a custom map depending on the tastes of different drivers? The car will recognize which driver is linking their mobile phone and adjust accordingly. Other cars have the ability to customize exhaust notes, but Roush holds a patent on the use of the mobile device app.

Track mode is ostensibly designed for the “track,” but one might be forgiven for keeping the dial firmly set in Track mode for daily driving. The symphony that results is one of the key features of the car, but hopefully you’re on good terms with your neighbors. 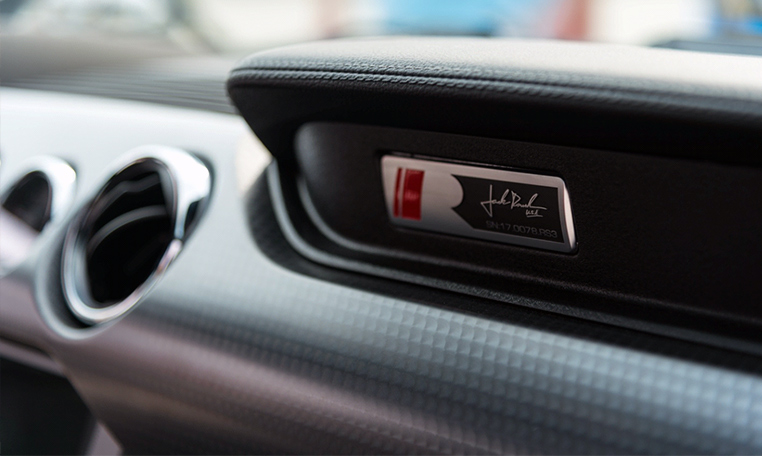 For the last decade or so, Roush Performance manufactured its own takes on the Mustang and Ford F-150 pickup truck. The company also developed a thick catalog of pieces and parts that any customer can use to customize their ride. As you might imagine, when Ford released the current version of the Mustang platform in 2015, Roush had some ideas. The newer Mustang platform provided a solid base for the Roush Performance team to add their own unique styling cues, suspension enhancements, and more power.

Jack Roush keeps tabs on Roush Performance as one of his many business interests and Jack Roush, Jr. is involved on a daily basis, so the Roush name on the front of the building and displayed on the product still has a direct link to the people that gave credibility to the name in the car business.

The specifics vary from model year to model year depending on the stock Ford Mustang line-up, but Roush Mustangs are currently available in four flavors.

The RS version is based on the V-6 platform (the RS stands for “Roush Six”). The Stage 1 is based on the Ecoboost 4-cylinder turbocharged engine and adds a variety of styling cues. Stage 2 takes everything available in Stage 1 but adds power and grip via the 5.0 liter V-8 along and suspension goodies which produce 1.07g on the skid pad. Stage 3 takes all of that and adds more power via a supercharger, taking the power from 435hp to 670hp.

More common terminology shortens the stages to RS1, RS2 and RS3. Each version is available in hardtop and convertible versions as well as manual and automatic transmissions. Coupes outsell droptops by a margin of about 10:1, but the choice of transmission is more varied. 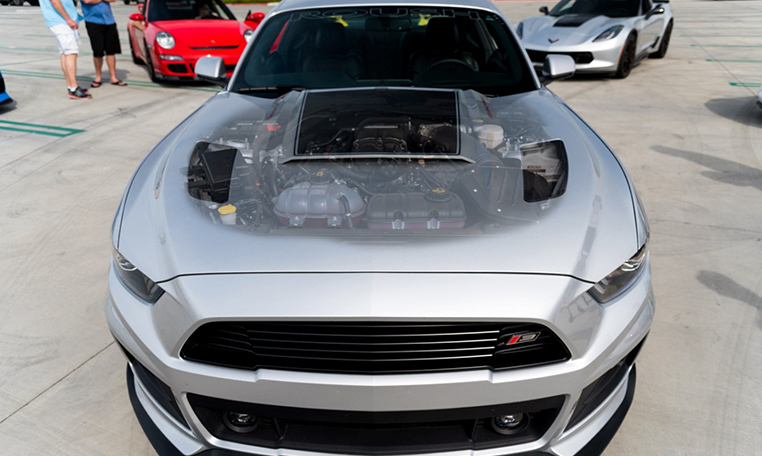 Yes, that’s 670 horsepower in a Mustang delivered via a supercharger in the RS3. The power requires stronger half shafts to deliver the power to the wheels, but the transmission remains untouched from the standard gearbox. Other peers may advertise raw power, but the Mustang is lighter and the suspension has been improved which makes for a nimble car.

Interestingly, the Roush Mustangs were only available with a manual transmission until Jack Roush heard about a military veteran who wanted a car but had physical limitations that requires an automatic box. Roush decided that an automatic transmission was in order for the vet, but the option soon was added to the regular line-up as well. 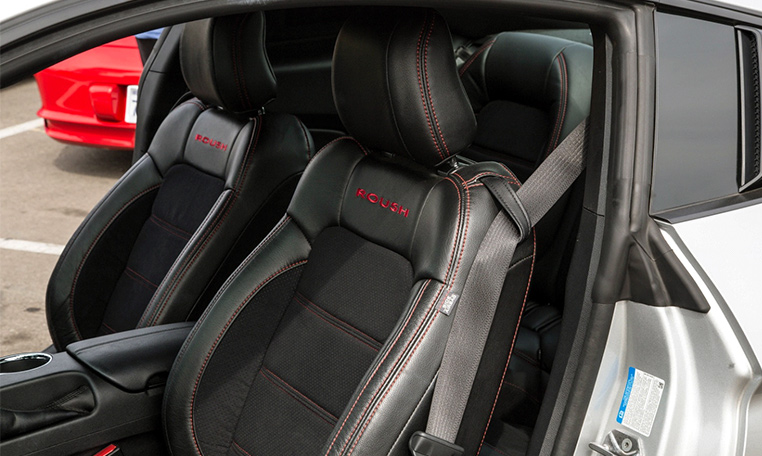 The basic Mustang shape and interior is retained but more firm Roush seats are added. Aero bits include an aggressive front fascia with fog lights in the lower grille and brake scoops carved into the bodywork on the outer edges. The front is joined by a larger custom rear wing, scoops ahead of the rear wheels, a hood scoop, and louvers around the small rear triangle rear windows. Colorful stripes on the flanks, Roush signage, and an RS3 badge on the front grille complete the look. 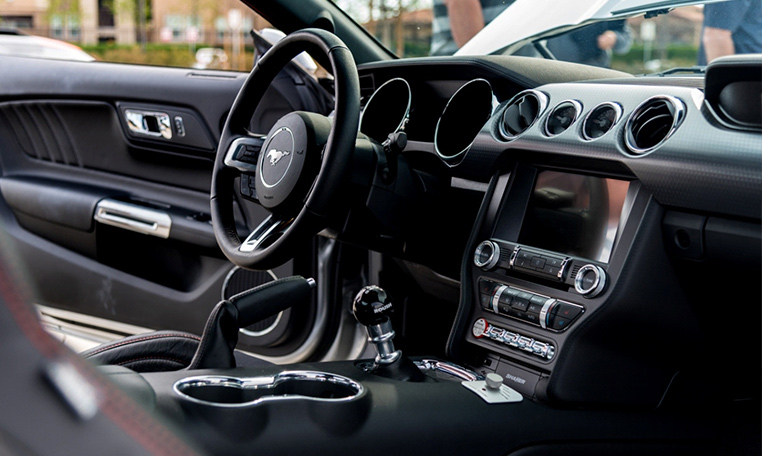 While Roush Mustangs are tweaked and massaged, make no mistake – Roush Performance is not a tuner. It is a manufacturer.

Roush takes delivery of brand new complete Mustangs right off the Ford assembly line and then slots them into the Roush assembly line. Once Roush has completed their work, the car carries a Roush product identity. As a manufacturer, Roush is held to the same regulatory requirements as all other original equipment manufacturers including emissions thresholds. 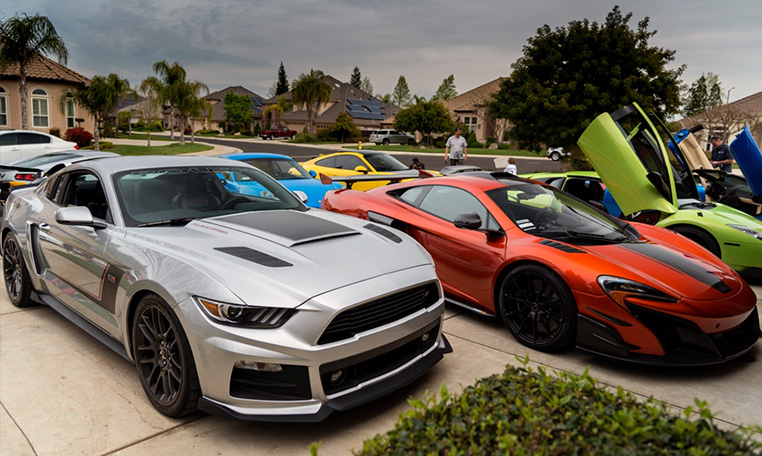 There may be other tuners or aftermarket shops that can take a Mustang and extract more horsepower, but none of them are OEMs that sell a product that comes with a factory warranty.

If you want to buy a Roush Mustang, you can only buy it through an authorized Ford dealership. And it comes with a factory warranty. And because it is based on a standard Ford Mustang, any of the Ford sales incentives are available as well.

Given the lengthy record of cooperation and collaboration between Ford and Roush, you might have guessed that the relationship is very close. For Ford to permit a third party to take a standard Mustang, transform it into a Roush product, and then sell it through their dealer network is a very strong statement of confidence. 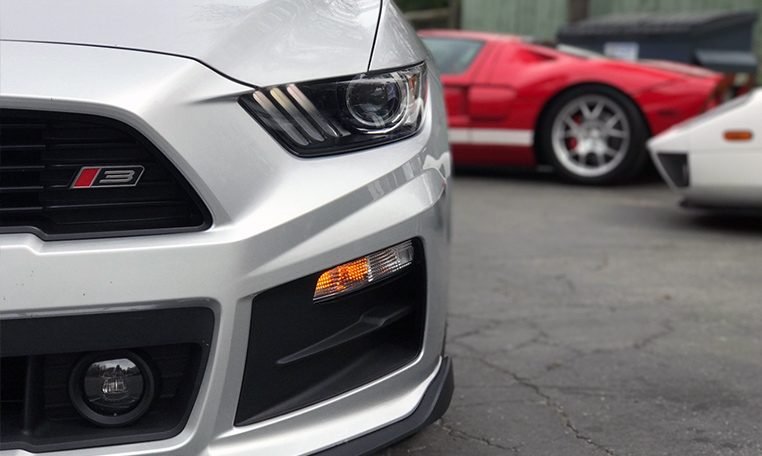 If you already own a Mustang, you can add many of the same goodies that are on the RS3 from the Roush Performance parts catalogue to customize your ride. You can even send your car to Roush and they will do the installation for you in their Speed Shop. You can get close, but your car still won’t be a Stage 3 Mustang because there are some parts that are only available with the cars that come off the Roush assembly line and sold via Ford dealers.

It is remarkable that a 670hp Mustang is available from a dealer and comes with a warranty. One can only imagine the amount of testing done to ensure sufficient quality and strength given the warranty. However, if 670 hp isn’t enough for you, Roush Performance can work with you to find more power. Getting more power will likely require changes to more parts to ensure strength, but your pocketbook is the main limitation. 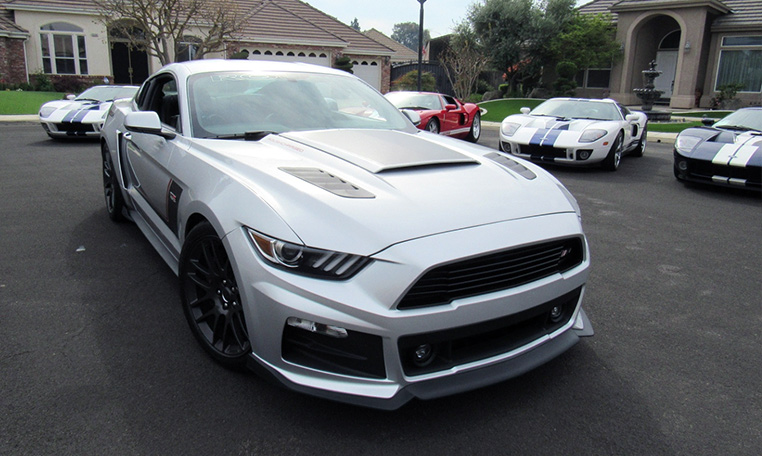 The Roush Performance RS3 strives to speak to buyers that are Mustang traditionalists and those new to the marque. The car is infused with decades of Ford and Roush DNA. The blend of straight line speed and grip in the corners makes for a machine that is at home both on the street and the track. Aggressive styling along with a forceful soundtrack that directly ties the gas pedal, the engine and the exhaust grabs the attention of both the driver and bystander.

Special thanks to the Piston Pushers and Ford GT owners of the Central Valley. 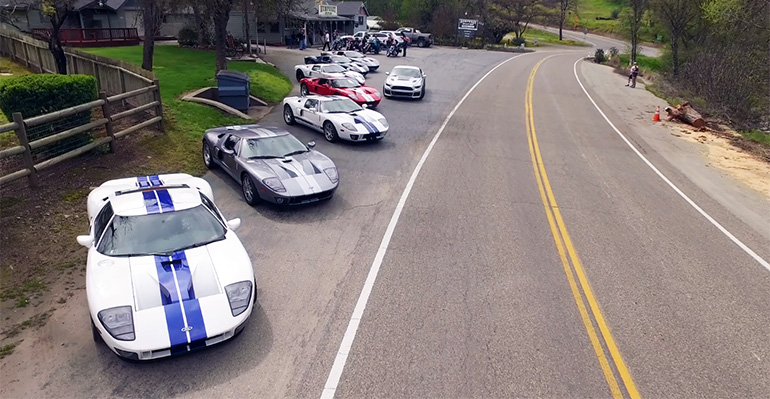