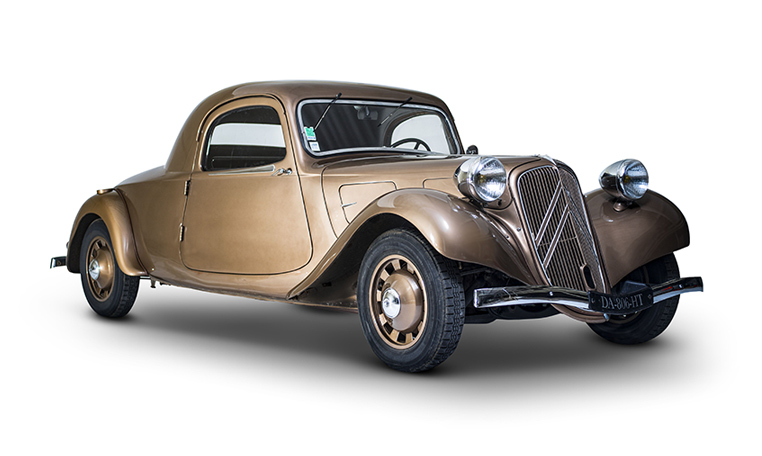 To those unfamiliar with him, Peter Mullin appears to be a quiet businessman, the founder of Mullin Consulting and other financial services. Beneath, however, lies the soul of a true automotive enthusiast. Automobile’s 2015 man of the year, Mullin is a well-known philanthropist and car collector. As chairman of the Petersen Automotive Museum, Mullin is dedicated to the preservation and exhibition of cars deemed both as works of art and history. Since the Petersen Museum hosts a variety of cars, Mullin decided to create his own, more focused museum. The center of his passion for French automobiles, Mullin founded his namesake Mullin Automotive Museum in 2010. After more than three decades worth of work, Mullin has created one of the world’s greatest collections of French vehicles. 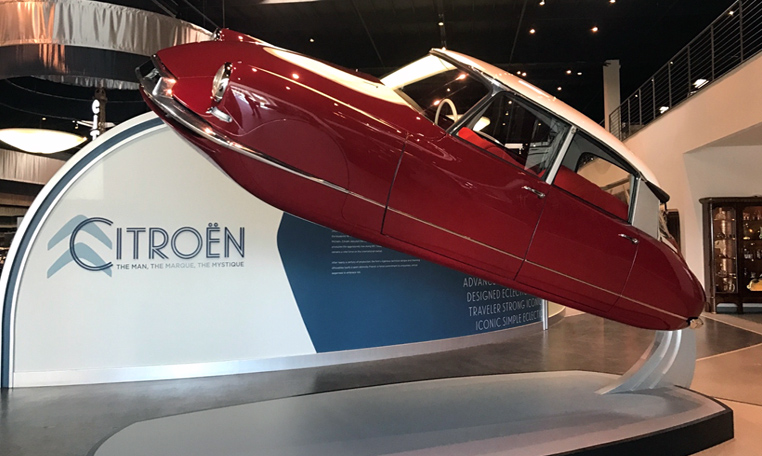 To celebrate Citroën’s upcoming 100th anniversary of production, the aficionado has assembled the largest display of Citroën cars ever to occur on American soil. The exhibit opened Saturday, March 11th, 2017 with semi-private tours available on Tuesdays and Thursdays and public days on the second and fourth Saturdays of the month.

The manufacturer is known for their technological advancements, creative styling and, of course, the 2CV. For those unfamiliar with the brand, the Mullin Automotive Museum is a great place to start learning about the rich, interesting past of Citroën and the company’s contribution to the world. Many notable examples of pivotal cars are displayed in the exhibit and the knowledgeable docents help bring the history of Citroën to life. 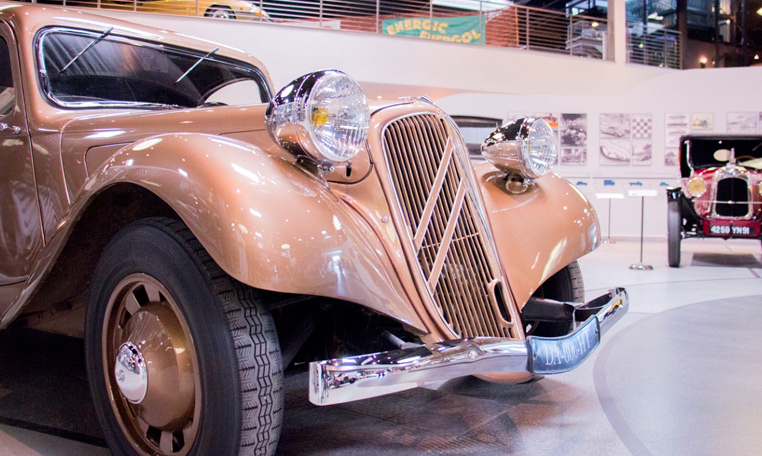 One such technologically important car was the Traction Avant. The first mass produced front-wheel-drive, steel unibody car, the Traction Avant created a standard that many car manufactures still use today. Paving the way for the sophistication of suspension systems, the car also featured independent front suspension and later had a height adjustable, hydropneumatic rear suspension. The museum houses five different versions of the Traction Avant, a representation of the development of the model during its production.

After 18 years of development, the Citroën DS 19 was launched in 1955 as a replacement for the Traction Avant. Also featuring front-wheel-drive, the car was the first to have a fully independent, four-wheel hydropneumatic suspension. It delivered an uncompromisingly comfortable ride over the rough roads of postwar France. However, Citroën’s use of hydraulic systems didn’t stop there. The car also had hydraulic front disk brakes, power steering, clutch and gearchange. To top off the DS 19’s impressive list of technological advancements, a coachbuilder by the name of Henri Chapron hand built custom bodies on the platform. 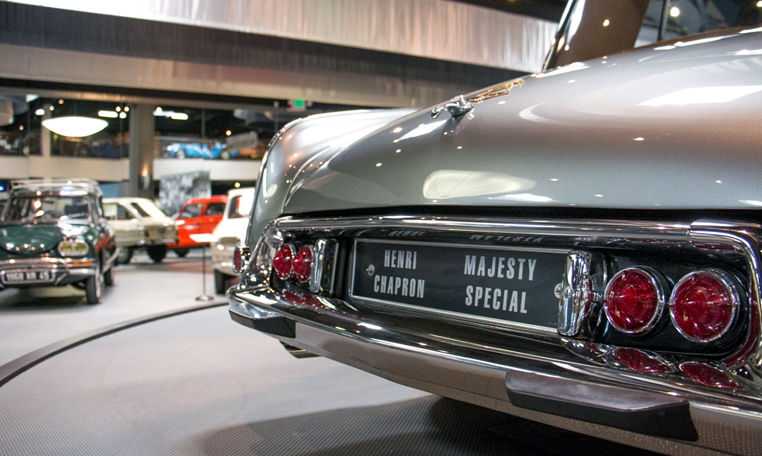 One such example was the DS 19 Majesty. In total, 27 examples of the majesty were created. A special edition of the Majesty, now displayed on a rotating platform in the Mullin, was ordered by racing driver René Dreyfus in 1964 with a host of unique luxury touches. The Majesty Special featured full metallic paint, suicide doors, power rear windows, a powered privacy panel, an electric clock, English leather and a myriad of other custom options. The only such example, the car is an extremely rare look at the interesting styling Chapron employed and his capability to build tailored vehicles.

While technological innovation, artistic aesthetics and marketing prowess have highlighted Citroën’s place in French automotive history, other examples of French ingenuity in the museum have their roots in European Grand Prix racing and urban legend. Bugatti, Delahaye, Delage and Talbot Lago are all famous car manufacturers in vintage racing, with examples of each existing as hidden jewels in the current exhibit.

One of which is the Talbot Lago T26C Grand Prix. Perhaps one of the best looking racing cars of 1950, it is a timeless classic and could almost be crowned the coolest piece currently exhibited in the Mullin. Although the car’s name does not bear the same weighty familiarity as a Bugatti, it is a truly amazing vehicle that manages to be a piece of art and a serious racer. While the displayed T26C is not one of the two that emerged victorious in the 1950 Le Mans Grand Prix, it did participate in various races in Europe that year, finishing in a notable fourth place in the Grand Prix of Belgium. Built for outright speed and reliability, the 1950 T26C featured a naturally aspirated, twin-plug, 4.5-liter inline-six engine making an astounding 250 horsepower at 4,500 RPM. Combined with a streamlined body, the car was capable of reaching speeds in excess of 166 MPH. Such substantial results from the T26C cemented the Talbot Lago name into the history of Formula One. 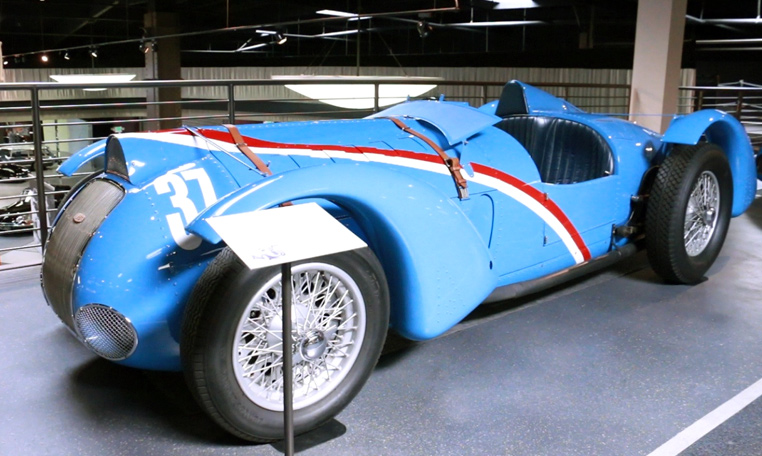 Thirteen years prior, the French were tired of getting beaten by the Germans and the boffins at Mercedes-Benz. With the French government offering a million Franc prize to whomever could beat them, Delahaye took up the challenge. They went to work and built a new chassis as well as a new 4.5-liter V-12 Engine. Making 225 horsepower their Type 145 was a force to be reckoned with. The car pictured here, which was the first of four race cars built for the Écurie Bleue racing team, set a new record at the Montlhery race track. With Rene Dreyfus at the helm, his average speed over 16 laps was a blistering 91.15 miles an hour. Then, in 1938, the car finished in first place both the Grand Prix de Pau and the Grand Prix de Cork. That year, beating the times of BMW’s entrances as well a slew of Fiats, Lancias and Alfa Romeos, Dreyfus finished the Mille Miglia in fourth place. On their home turf, only three Italian cars finished sooner than the Delahaye Type 145, all Alfa Romeo 8Cs. With solid finishes, broken records and the defeat of the Germans, Dreyfus became a national hero and the Delahaye Type 145 earned its place in grand prix history. 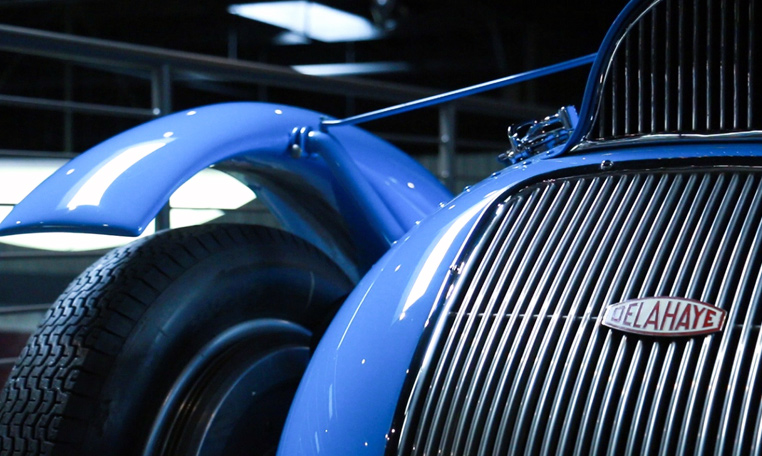 Racing cars are dear to all automotive enthusiasts and Peter Mullin is no exception. Citroën may the nuclei of the current exhibit, and the T26C is epically cool, but it would be hard for the most special of Mullin’s Bugattis to not steal the show. Having its place as one of the most successful cars in all of racing history, the Bugatti Type 13 was the keystone of the manufacturer for many years. Also known as a Bugatti Brescia in its 16-valve form, the 1.3-liter, dual overhead cam, inline-four engine defeated its more powerful adversaries with a superior power to weight ratio. The Type 13 went on to see four longer chassis versions of itself in the 15, 17, 22 and 23. With a total of 2005 Brescias produced, any of the Type 13 variants are rare. However, the Type 13 variant that created an urban legend is the true hero of Mullin’s museum. Lost in Lake Maggiore for over 70 years and hence nicknamed the “Lady of the Lake,” a famously unrestored 1925 Bugatti Type 22 Brescia resides in the Mullin Automotive Museum. 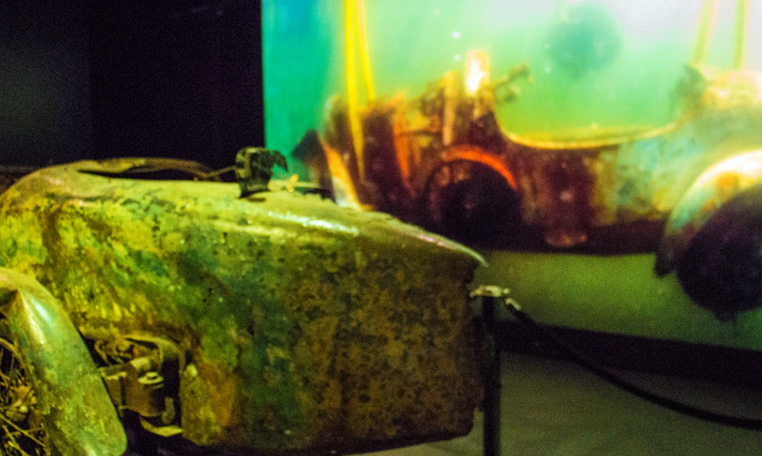 Making yet another appearance in the fascinating history encapsulated in the museum, René Dreyfus was said to be the car’s owner at one point, losing it to a Swiss playboy in a drunken poker game. The car was then taken back to Switzerland, where the story becomes a bit convoluted. There are multiple versions of the story explaining how the car got to the bottom of the lake. However, all of them claim that the car’s new owner was unable to pay the import taxes on the vehicle. Due to this, the Brescia was sunk in the lake, where it sat for decades. In 2009, a local diving club exhumed what remained and placed it in a charity auction. A historic racing car and legend in its own right, the Lake Maggiore Type 22 Bugatti was a solidly built, 40 horsepower, 100 MPH-capable marvel. As both a piece of art and evidence of Bugatti’s quality craftsmanship, the Lady of the Lake has finally found a fitting home in the Mullin Automotive Museum. 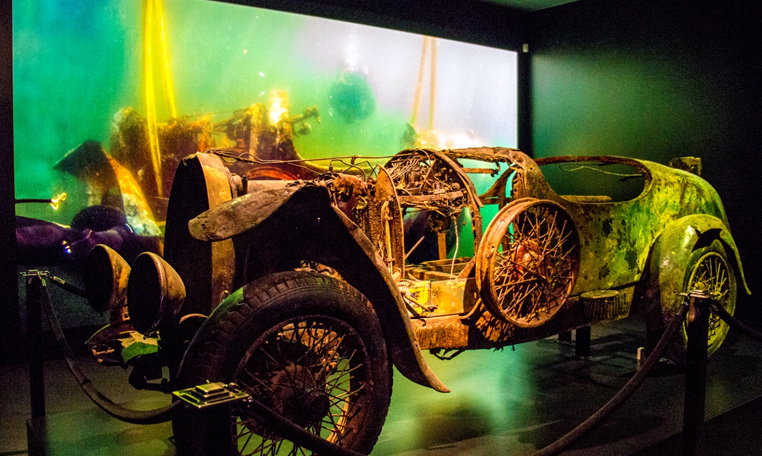 Whether you are captivated by vintage racing cars, innovative road cars or automotive legend, we can guarantee something will seize your attention at the Mullin Automotive Museum. If you would like to plan a visit or learn more about the museum and the exhibits, please visit mullinautomotivemuseum.com.

The Speed Journal would like to thank Peter Mullin, the Mullin Automotive Museum and their fantastic docents for a highly enjoyable, entertaining and informative afternoon. It was a pleasure to learn more about Citroën and have an opportunity to view the world-class exhibit Peter has put together.