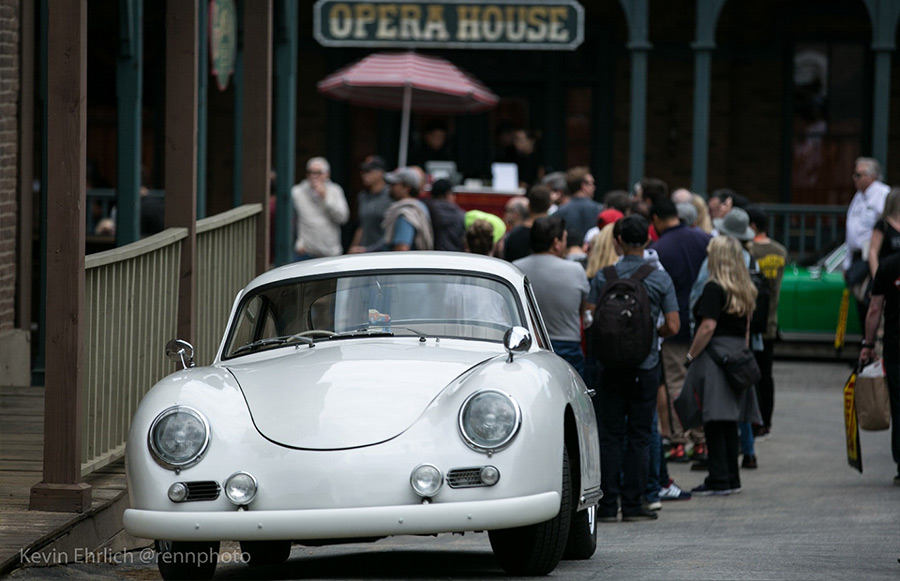 There was an obvious irony to Luftgekühlt 6. An event devoted to the gravitas and authenticity of the air-cooled Porsche era took the spotlight among the Universal Studios back lots in Hollywood which is made up of facades cleverly designed to reflect almost any time and place. They provided the perfect backdrop to highlight the four-wheeled stars of the show.

Decades of Porsche history took up temporary residence in front of fake fronts, such as hotels, a city hall, a theater, “red brick” walls, brownstones, an opera house, a general store, a bank, a church, and advertisements. An entire city block facade, four stories high, showed doors and windows in only two dimensions bordered the event. 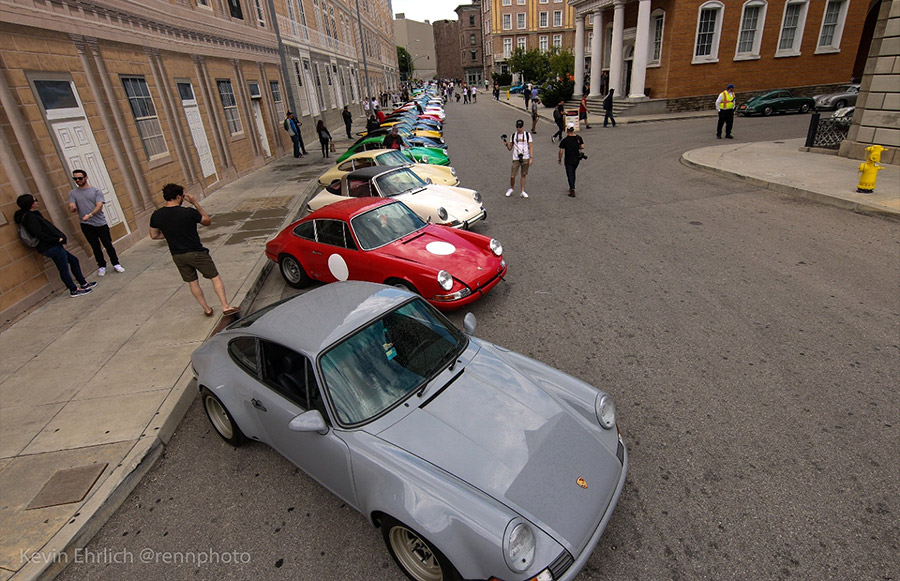 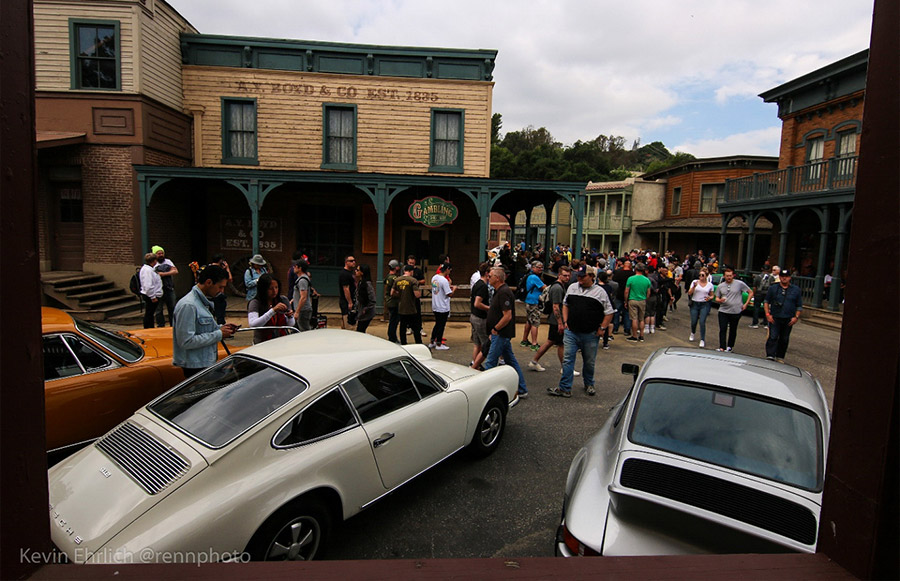 But it worked. Hundreds of historically significant race cars, custom creations, safari cars, low production specials, and honest examples of period correct showroom stock – it all found a home with the common thread of the Porsche air-cooled engine. Rust, patina, wear, dirt, cracks, and age were virtues rather than pristine and bug-free. Transporters delivered special cars while other cars were driven from enthusiast garages to be a part of the fun. Attendance was not limited to Southern California residents. Some made extended road trips or flew into Los Angeles from across the country and the world. It really worked.

With extreme secrecy, the May 2019 date for Luftgekühlt 6 was initially announced without a venue. Owners applied without knowing the location other than the Los Angeles area. In early April, the Universal Studio back lot venue was announced and tickets went on sale. Space was limited and the event sold out quickly. “Sold out” meant that some had regrets and could only watch from afar. “Quickly” meant in under 48 hours.

On Saturday morning, hundreds of cars and thousands of people descended on Universal Studios in Hollywood. The unique venue provided the challenges of remote parking, security lines and shuttle buses. The upside, however, was an unparalleled, exceptional venue. 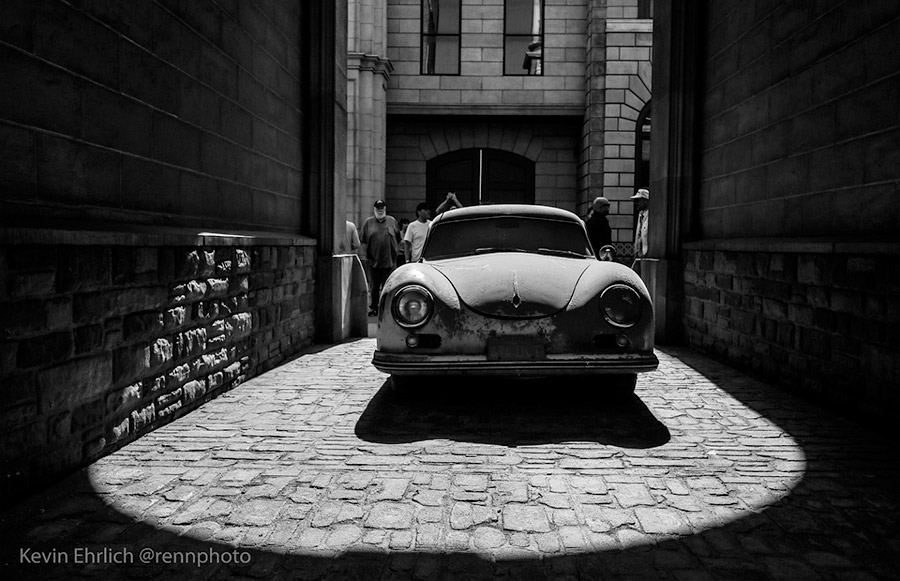 The orange number 2 1970 Porsche 914/6 GT race car took up residence in front of Engine Company No. 2, clearly matching the two number 2s. The car is one of three factory entries that ran in the infamous Marathon de la Route at the Nürburgring in August 1970 and finished third overall. It came from the Revs Institute Collection in Naples, Florida and is authentic. Engine Company No. 2 fire station with its red brick façade, stone trim and enormous wood red double doors is obviously not authentic. 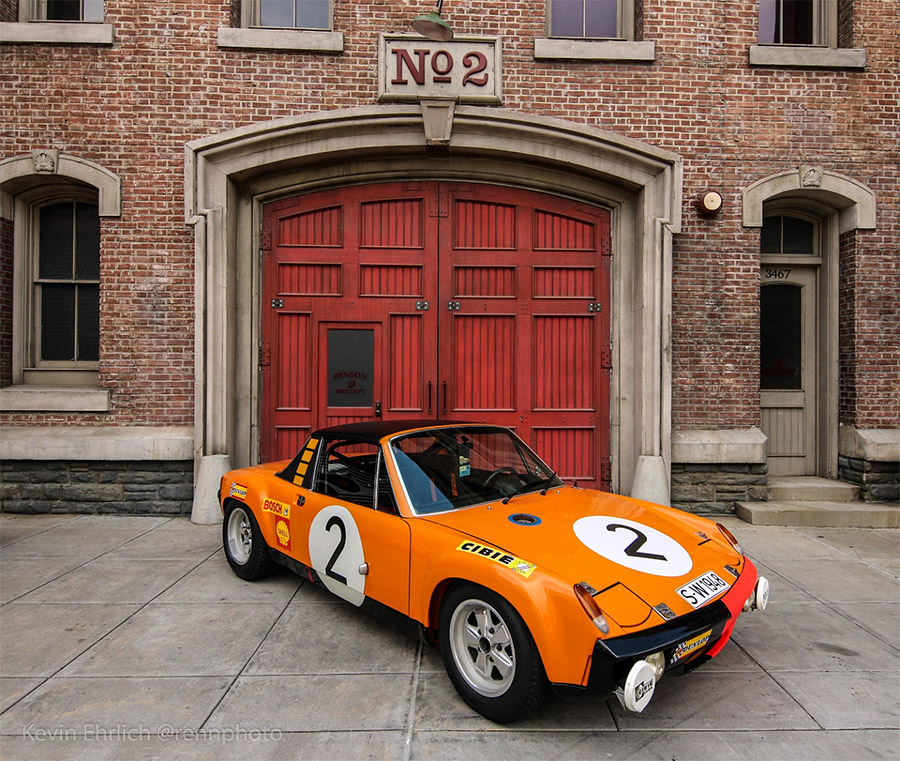 The Western Theater marquis heralded the Luftgekühlt event and date as the feature attraction. Bruce Canepa’s Porsche 917K-017/004 parked beneath the marquis on the north side of the theater and likely earned top honors for most photo opportunities and social media postings. A red Le Mans Porsche 935 with extensive racing history at LeMans, Daytona and Sebring, once driven by Paul Newman and now owned by Adam Carolla, took up residence around the corner underneath the similar signage on the adjacent street. The theater may be better known for its role in the Gremlins movie but the only monsters attending the theater at Luftgekühlt were those born in Flacht. 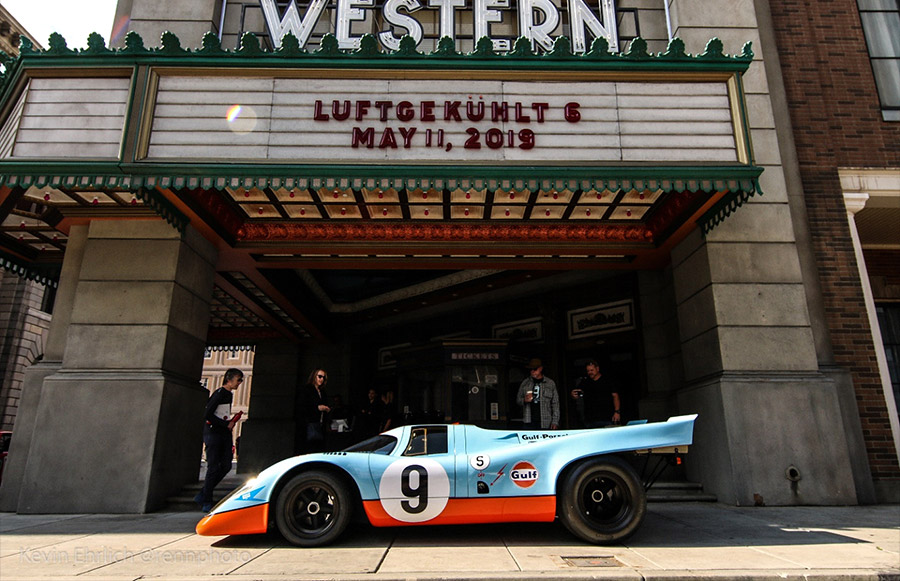 A towering brick wall façade surrounded dozens of Porsche 914 variants in every color and configuration, celebrating the 50th anniversary of the 914. Four-cylinder and six-cylinder, racing and road spec, historically significant and less unique, stock and fully modified – fifty years of Porsche 914 was arrayed and celebrated. Hurley Haywood circulated amongst the crowd and checked in on vintage race cars, particularly the iconic orange Brumos number 59. 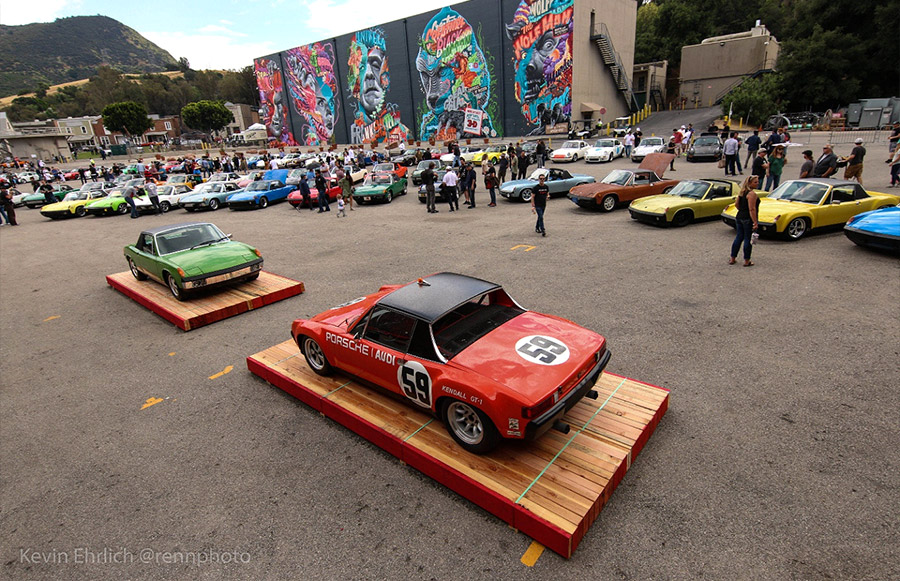 The 964 family populated a different neighborhood framed by a “brick wall” up the street. RS America, Carrera 2 and 4, Carrera Cup, RS and more – a Porsche factory production brochure. Against the backdrop of the “brick” wall, an array of 964 vehicles of various colors circled a rare Ruf Yellowbird Porsche strategically placed on a low lumber pedestal. The vibrant Yellowbird attracted a steady stream of cameras and eyeballs. 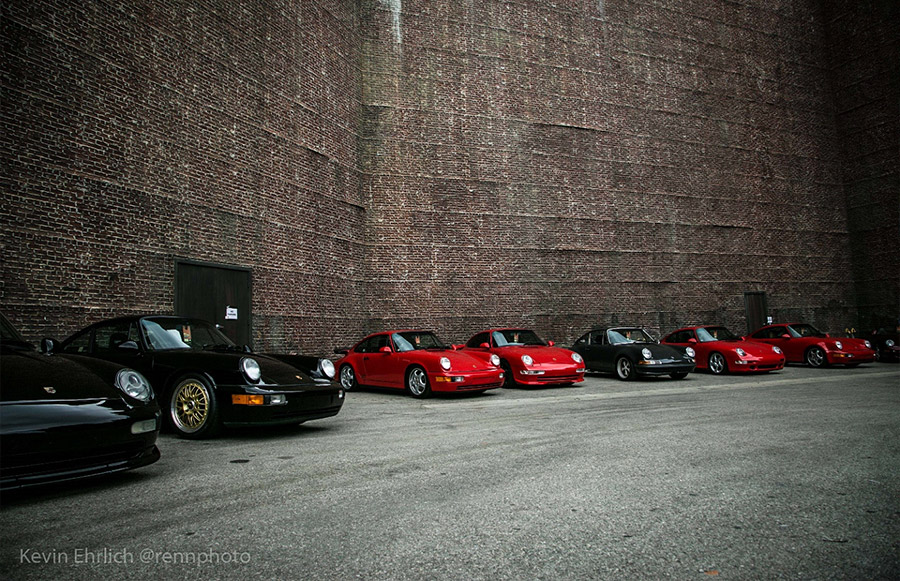 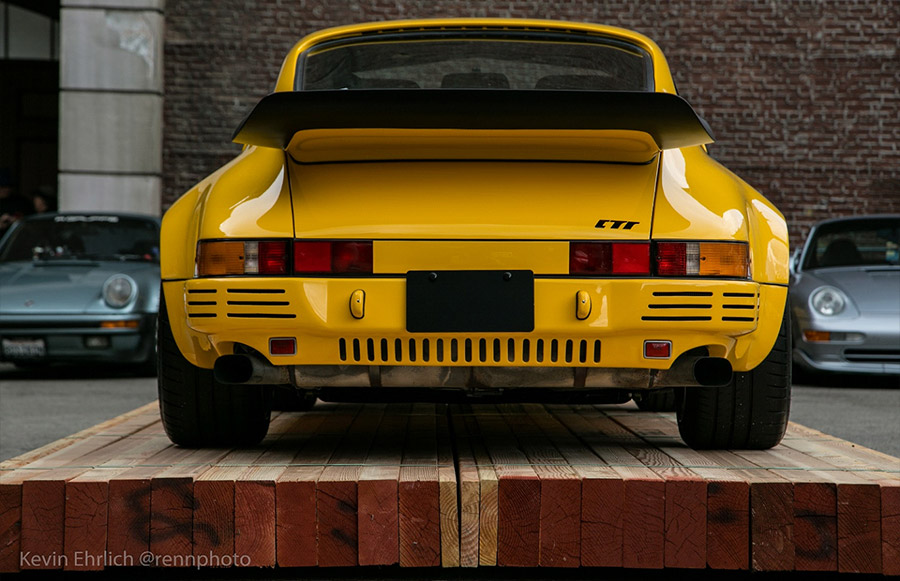 The 50-year anniversary theme also extended into the only indoor display space with focus on the mighty 917. Three 917 spyder variants were tucked inside Stage 747. One would have been sufficient to anchor any car event in the world, but three positioned together was an indulgence. Bruce Canepa’s team brought a pair of 917 spyders. Chassis 917/10-017, red with yellow trim, was run by Gelo Racing in Europe in 1973. Chassis 917/30-004, presented in white, was built in 1974 but never raced in period. The Revs Institute sent 917-028, better known as the Porsche 917PA, claimed an honored central spot. 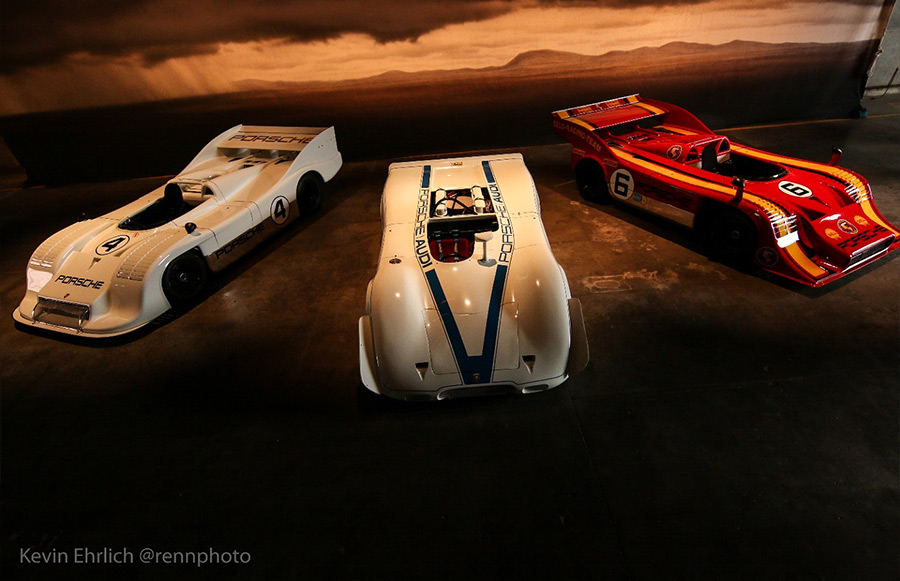 Across the lot in Western town, early 356 and 911 examples lined the streets of the old west. The wooden store fronts that served as backdrops for many, many Westerns provided weathered patina to match cars with their own patina and significant mileage. M.J. Stuartson, the Clothing and Dry Goods storefront with signage advertising the Largest Stock and the Lowest Prices in the West, had no stock or low-price tags, but set the tone for the street. The Bayside Porsche 962 run by Bruce Leven in IMSA competition in the 1980s welcomed visitors to Western town as the fastest garbage truck in the west. 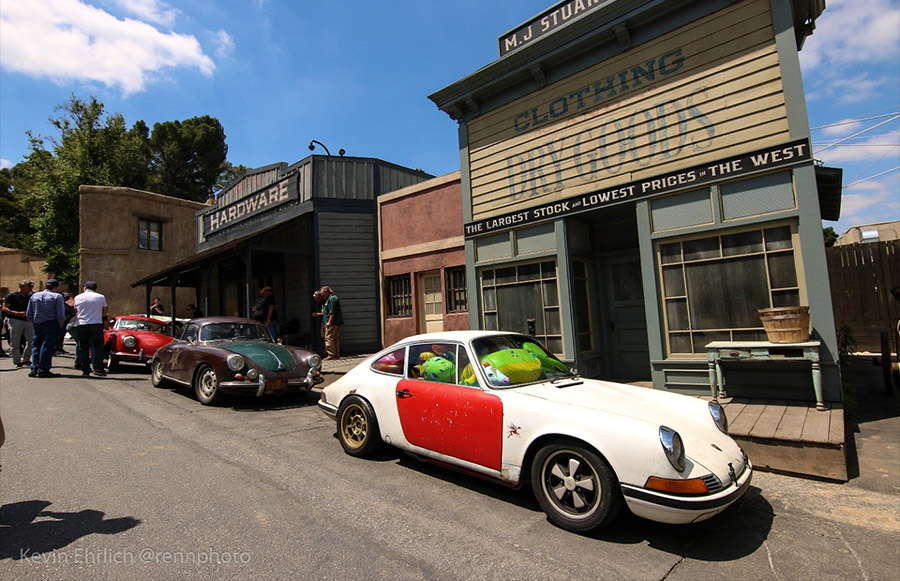 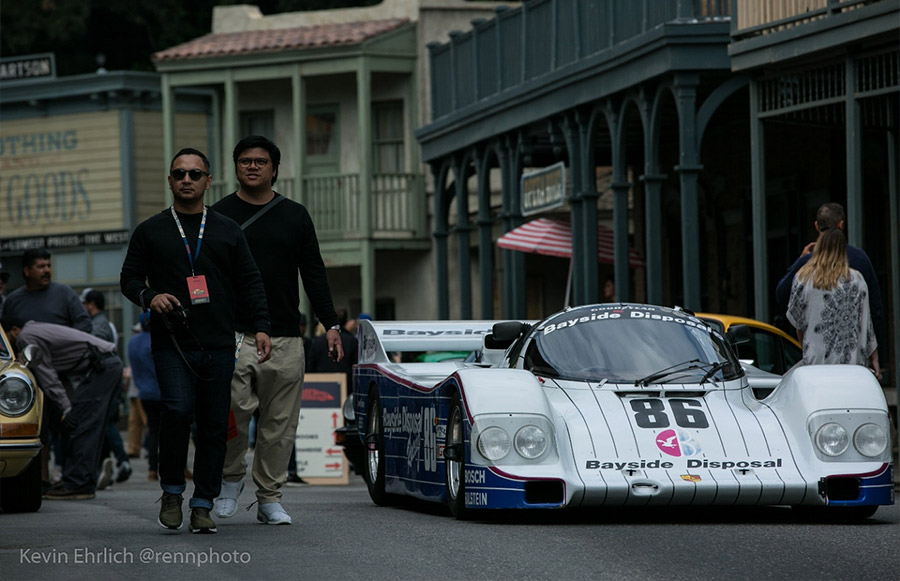 Western town led guests to Mexican town. The last factory-built Porsche 935 straddled the border between the two. Adobe fronts, a water fountain, cactus and sandy terrain established the dusty environment suitable for safari and rally cars of various shapes and sizes. 911 versions with European rally, Baja desert, Pikes Peak, and safari configurations joined a 356 to fill out the Porsche presence in Mexican town. 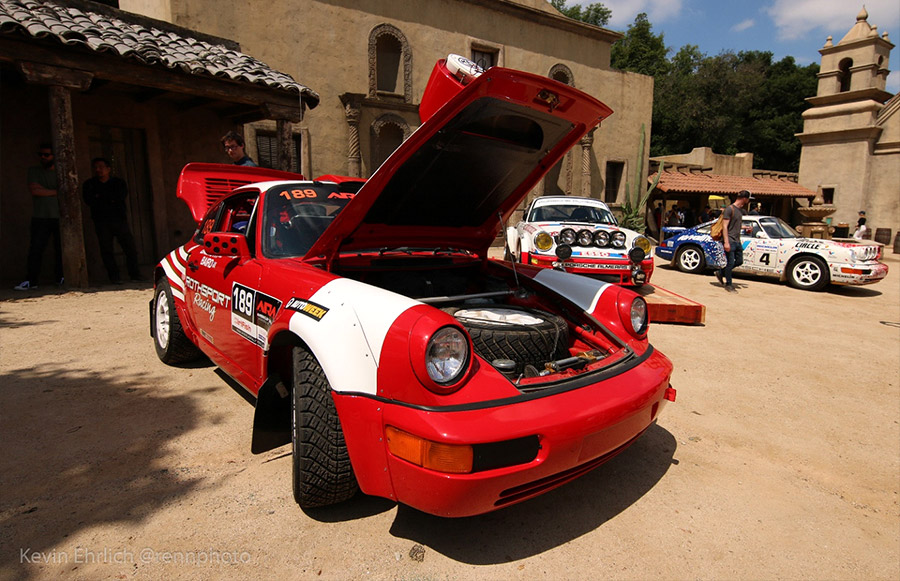 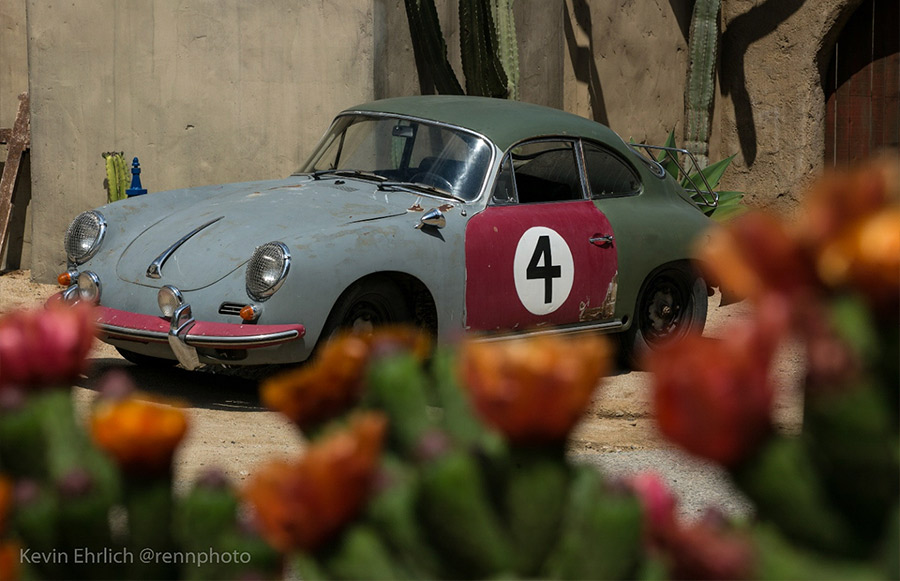 A popular setting was the town square edged by shrubbery and well equipped with picnic tables. Guests enjoyed a bite to eat and an adult beverage or two at picnic tables provided for the event, accompanied by a beautiful blue 1965 Porsche 911 coupe – the earliest 911 on the property. Courthouse Square is probably best known for its headline role in the apogee of the Back to the Future movie where a DeLorean harnesses energy from a lightning strike on the clocktower to jump three decades into the future. Appropriately, the clock remains fixed at 10:04pm. 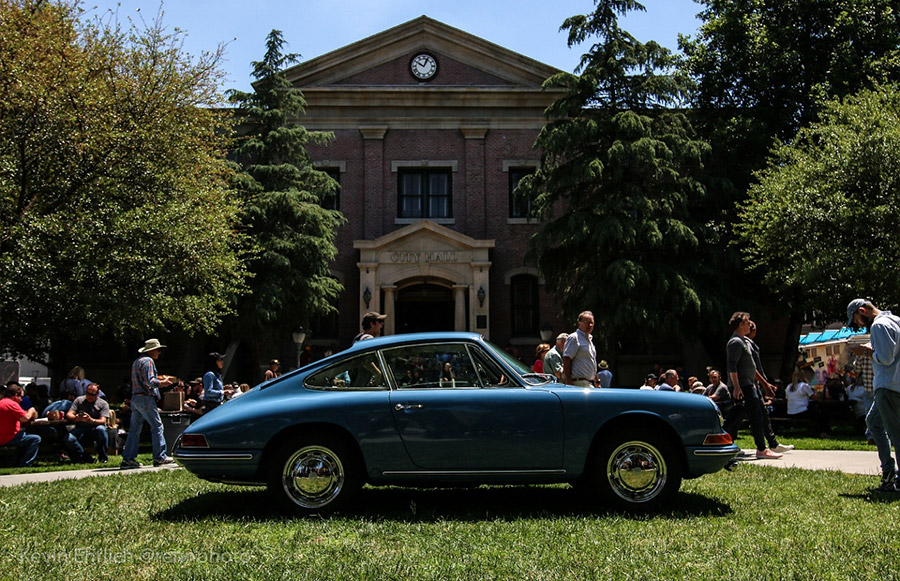 Across from the City Hall and clocktower, Porsche Classic converted an old gas station into a Porsche air cooled service station. Custom Porsche signage, Porsche classic gear and a borrowed pair of 356 coupes (one complete and the other in bare metal). Little touches, such as the vintage racing posters in the windows, completed the look as friends old and new mingled with the Porsche classic team. 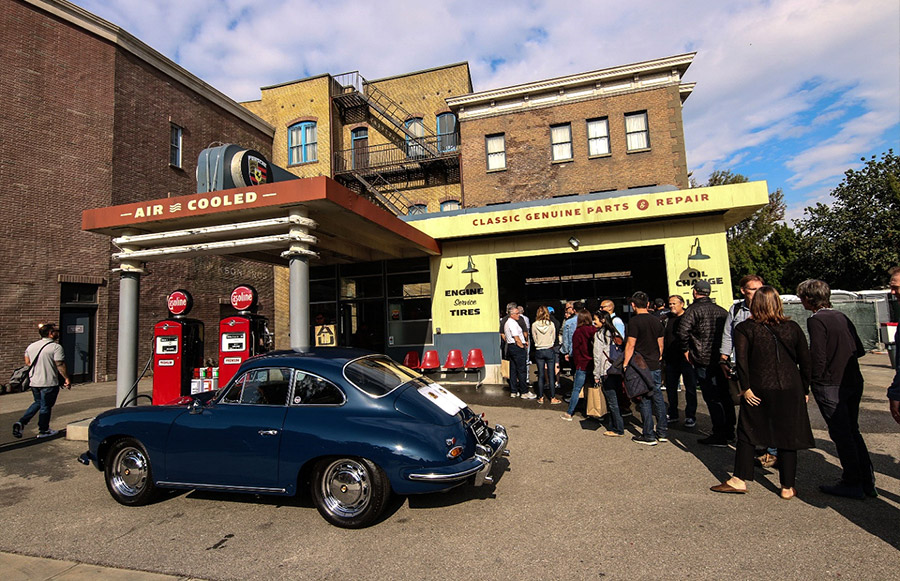 The 1981 Le Mans winning 936 from the Porsche Museum held court at the intersection of New York Street and Embassy Street. Just up the block across from a pack of 993 turbo variants, a white 911R sat atop a wooden platform. A 911R would be unique enough but this was 911R-001, the car that claimed long distance records at Monza in 1967 and subsequently restored by Tony Callas. 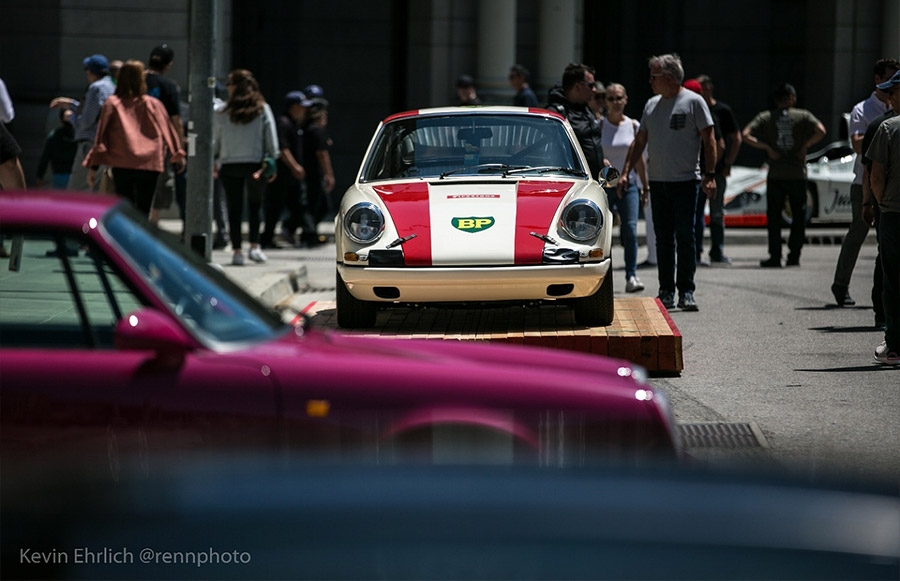 Other gems graced New York Street – a black 959, 964 Turbo and Carrera RS siblings in rubystone raspberry paint, and a trio of Singer 911 examples. Further up the avenue, Rod Emory 356 specials lined the curb. In particular, Emory’s custom 356RSR project exerted gravitational pull on eyeballs and cameras. Jerry Seinfeld’s rare orange Porsche 934 turbo anchored the top of New York Street. Walking the length of New York Street past the brownstones, office buildings and retailers was worth the price of admission alone. 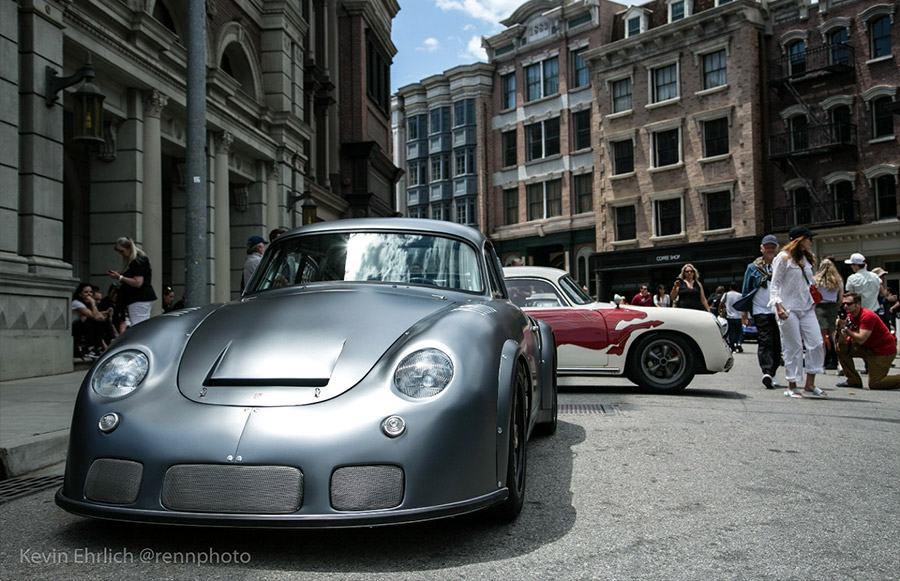 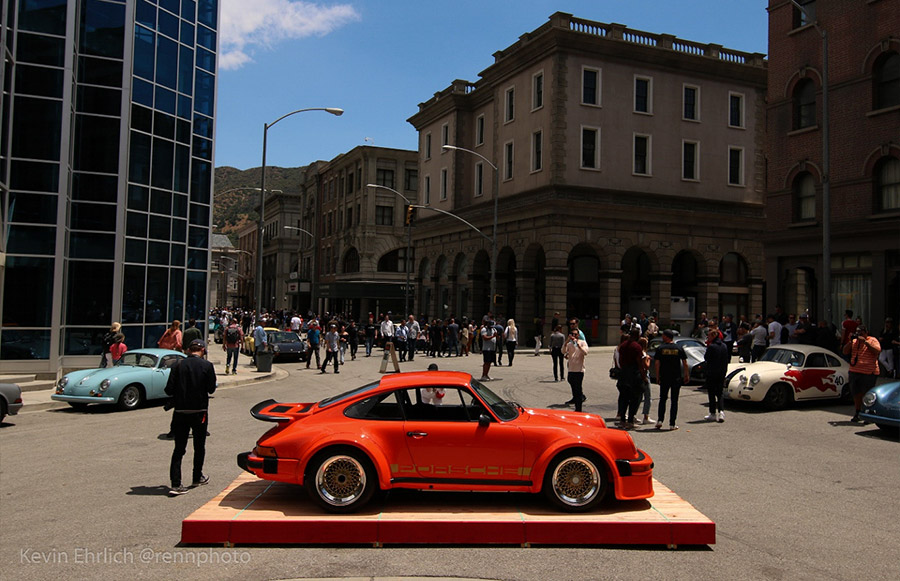 The Luftgekühlt magic includes so many stories, so many photo opportunities, so many kindred spirits, so much history, so much creativity, and so much secret sauce that binds it all together. There is no map, no guidebook and no defined way to absorb it. In fact, some nooks and crannies were easy to miss for the incurious. It was physically impossible to take it all in. Walking past cars that would typically warrant hours of appreciation almost felt disrespectful. 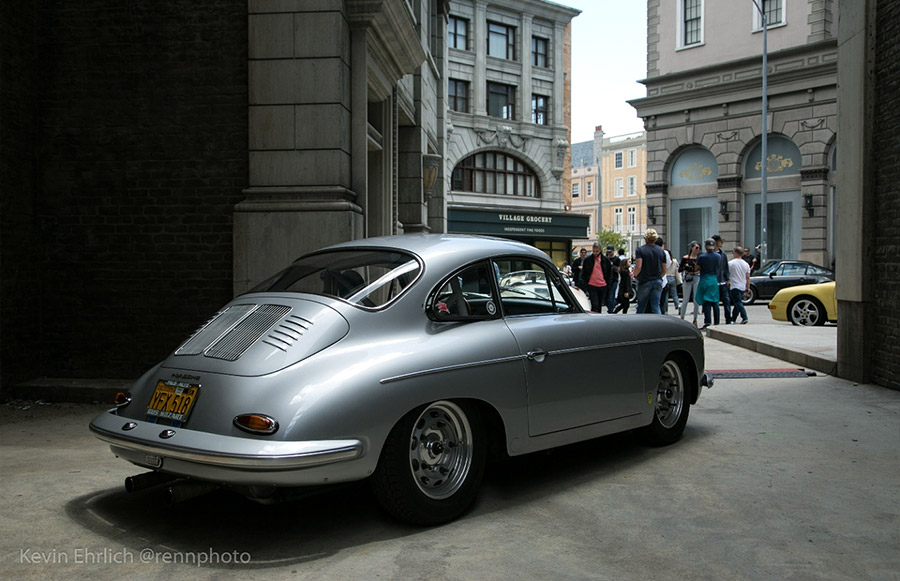 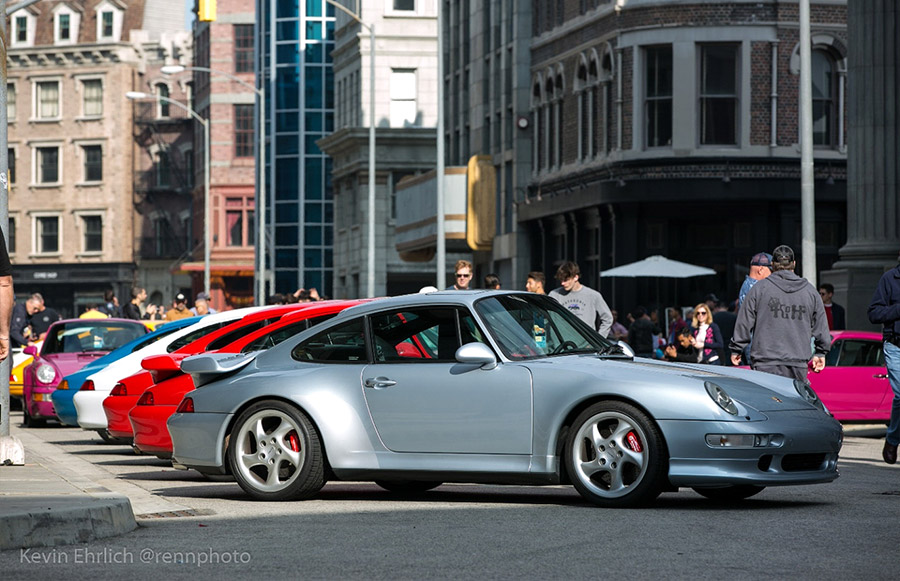 Organizers Patrick Long (of Porsche factory driving notoriety) and Howie Idelson (of design and go-karting experience) strike the right mix, find unique venues, and have people begging to bring their cars. Creative artistry from the mind of Jeff Zwart organizes themes and settings to best highlight the cars. No doubt others help behind the scenes as well. The budget for ropes and barriers to separate cars from guests is zero. Cars are curated but not separated. At most, security staff at Luftgekühlt 6 prevented interference with the usual business of Universal Studios. 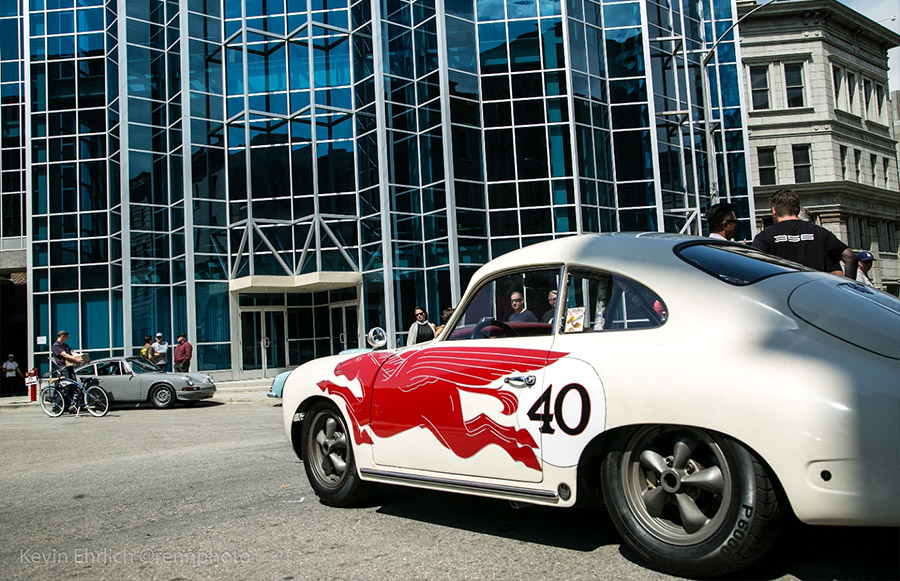 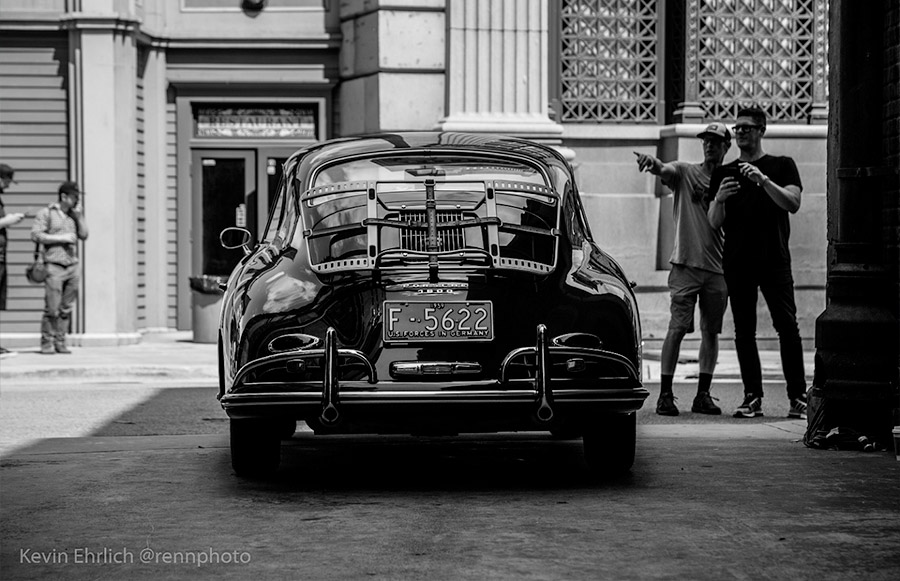 Luftgekühlt 6 will be difficult to top, but that’s been the assessment after each prior edition as well. In all, rumors suggested in excess of 360 cars and 5,000 attendees descended on Universal Studios for a day of pure, undiluted air-cooled German goodness. And that can’t be faked.