Fly Like an Eagle: The Peterson Automotive Museum Celebrates the Life and Legend of Dan Gurney 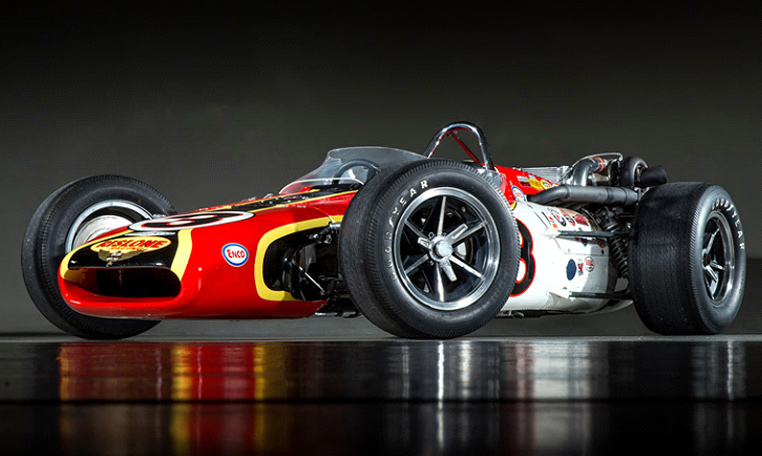 The Speed Journal was thrilled to attend a fitting and well-deserved tribute to a California racing legend when The Peterson Automotive Museum in Los Angeles held a special event celebrating the life and legend of Dan Gurney. The evening celebration, held on Friday, January 27th, 2017 opened a spectacular new exhibit, “The Eagles Have Landed: Dan Gurney’s All American Racers.”

The exhibition is a stunning collection of the race cars, motorcycles and memorabilia from Dan Gurney’s incredible 15-year-career as one of racing’s most celebrated drivers, one who raced in over 312 events in 20 countries, winning 51 races and mounting 47 podiums. Dan, of course, was the first driver to post victories in motorsport’s most popular categories: Grand Prix, Indy Car, NASCAR and Sports Cars. 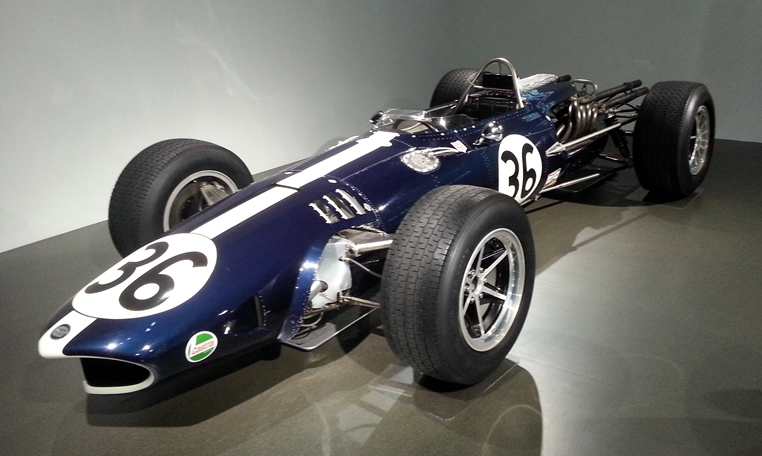 The new Gurney exhibit is framed in the Nearburg Family Gallery and will run until January 17, 2018. The show brings together 12 legendary race cars and one motorcycle, including the 1967 AAR Eagle Gurney-Weslake V-12 #36 Grand Prix Car, which famously won the Grand Prix of Belgium at Spa-Francorchamps. The collection also spans the innovations and technical know-how Dan Gurney demonstrated as an inventor, showcasing his 1970 Plymouth Barracuda AAR Trans-Am and the famous Gurney Alligator motorcycle, among many other priceless showcases.

The evening was hosted by Terry Karges, the Executive Director of the Peterson Automotive Museum. Mr. Karges was extraordinarily generous with his time during an extended interview and tour with Jeff Francis from The Speed Journal in the Nearburg Family Gallery prior to the tribute later that evening. 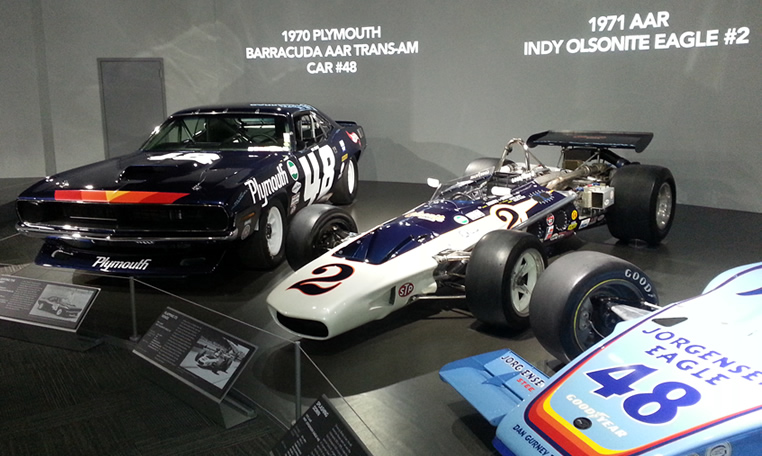 During the interview, Terry described being a youngster at Dan Gurney’s first race at Torrey Pines in 1955, evoking the sights, sounds and smells of those glory days as Gurney burned up the track in his Triumph T2, shattering the quiet of a perfect San Diego Day. Terry also shared stories about Dan Gurney’s memorable habit of celebrating his victories by spraying champagne, and fascinating tales of the racer’s penchant for invention and innovation.

“Dan Gurney has had an incredible impact on the sport of auto racing and the Petersen is honored to be able to showcase some of his cars along with other racing memorabilia,” said Karges. “This is a fantastic opportunity to expose a whole new group of people to Dan’s incredible life and career.” 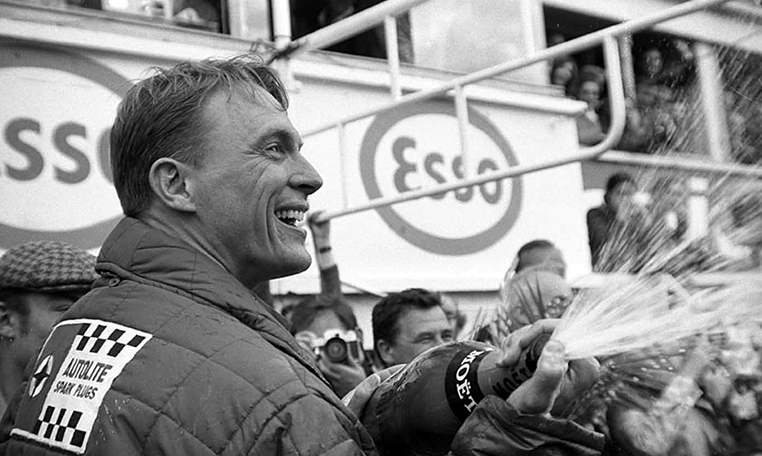 Among that historic memorabilia was the very first full face helmet worn in a race—by Dan Gurney, no stranger to being first. Another artifact on hand is the first bottle of Moet Champagne Gurney sprayed after he and A.J. Hoyt won at Le Mans; it’s a bottle that has its own unique story, as related on the Gurney family’s All American Racers site.

“I was so stoked that when they handed me the Magnum, I shook the bottle and began spraying at the photographers, drivers, Henry Ford II, Carroll Shelby and their wives,”Gurney remembered. “It was a very special moment at the time, I was not aware that I had started a tradition that continues in winner’s circles all over the world to this day.” 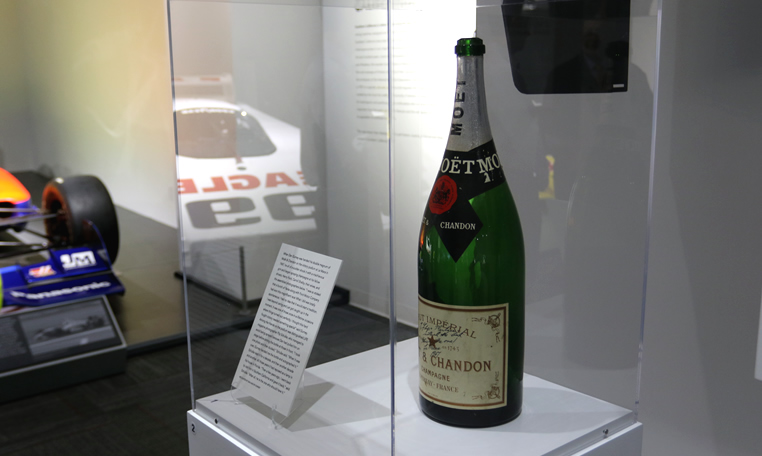 Of course, the bottle had a long strange trip to the museum. When Gurney finished spraying the crowd, he autographed the bottle and handed it to distinguished Life Magazine photographer Flip Schulke, who used it as a lamp base for two decades before making a special trip to Southern California to return the famous Magnum to the racer who earned it.

As the interview ended, the Gurney family arrived at the exhibit for their private viewing prior to the tribute to take place later that evening. It was an honor to greet Dan Gurney and to see their delighted expressions as the family toured the exhibit.

Later in the evening, land speed record-breaking racer Charles Nearburg narrated a fascinating and extensive photo tribute to the life and career of Dan Gurney, from his humble origins in the glory days of California’s hot rod culture to his storied post-racing career as owner of Dan Gurney’s All American Racers (AAR), which built 158 Eagle race cars between 1965 and 2012. AAR’s current President and CTO—and Dan’s son—Justin Gurney brought his father to the stage for a standing ovation. The tribute evening concluded with a brisk auction of two Dan Gurney signed helmets and a Gurney Eagle Indy car print.

The Speed Journal team is honored to have covered this exciting event and exhibit, and encourage all our readers to make the trip to Los Angeles to visit founding benefactors Margie and Robert E. Petersen’s incredible tribute to Southern California’s rich automotive history. Check back here soon for a more comprehensive tribute to Dan Gurney’s incredible history from running 138 mph at Bonneville at the age of 19 to inspiring The Cannonball Run. It’s a story that can’t be missed.