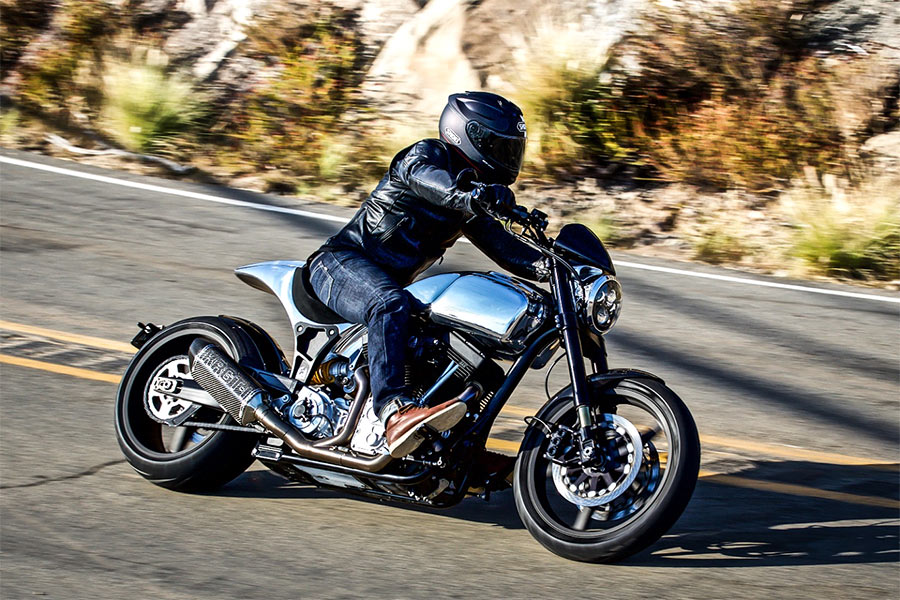 Arch Motorcycle is a small company located in Los Angeles. It is a very young company and has less than a dozen staff. To date, it has made less than three dozen motorcycles and has capacity for only about 30 per year. With a price point touching $80,000 for one bike, its potential market is narrow. Its footprint and impact, however, are much larger than its mere sales volume would suggest.

In a world where commercial success is often measured by lifestyle branding, merchandise sales, reality television, marketing tie-ins, product extensions, and celebrity endorsement, Arch Motorcycle maintains a simple focus of making well designed motorcycles. It is ambitious in its objectives, but extremely focused, deliberate and methodical in its approach.

Surely other motorcycle makers would say the same thing, so what makes Arch Motorcycle unique?

First, Arch Motorcycle effectively created a market. The seamless blending of a motorcycle with power and torque, but also handling resulted in a motorcycle dubbed the KRGT-1 that has become known as a “Sport Cruiser.” It is not a small, high revving sports bike that would look more at home on a race track. It is also not a large and lumbering touring bike that one might envision for a long tour of the open roads laid across the western United States.

The goal was a ride that was lively and forceful but comfortable through long sweeping corners and flowing roads that undulate with elevation. Power comes from an unapologetic American V-twin engine making 122 horsepower and featuring a proper rumbling soundtrack to involve the senses. The fuel tank is large enough to be functional for a day of riding rather than minimal and suitable only for a lifetime of static display. The vision was born on the roads that wind and twist through the Santa Monica mountains north of Los Angeles such as Mulholland Drive.

Before Arch Motorcycle introduced its first motorcycle, the KRGT-1, in 2014, this market segment really didn’t exist. After, other manufacturers saw the vision and opportunity and followed, effectively validating the original Arch concept. 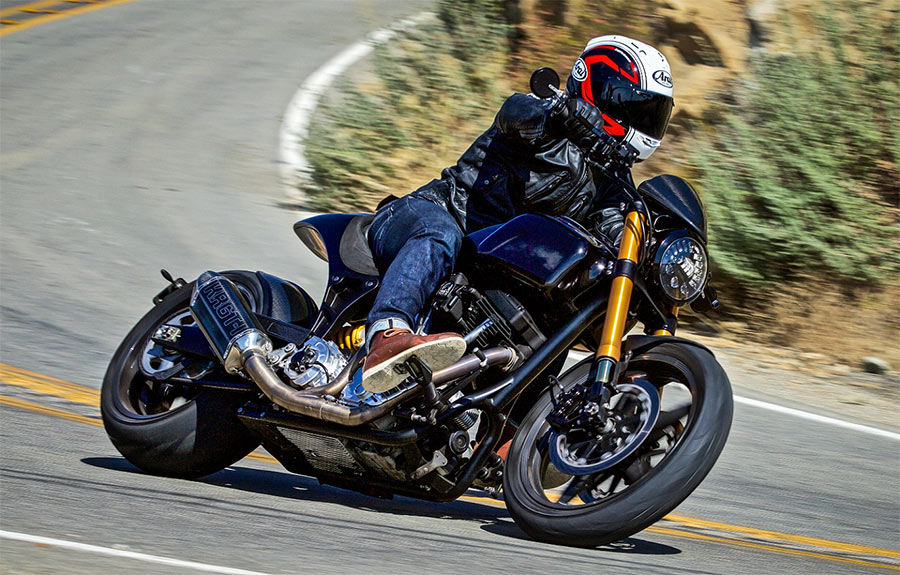 Second, Arch Motorcycle tightly controls its design and manufacturing process with an obsessive attention to detail. Most parts are milled out of billet aluminum in-house and are structural components. That bears repeating because it is novel. Not only are 200+ components made in-house, most are milled out of blocks of aluminum. They are not pressed or formed. The design is a pure form-follows-function formula with no unnecessary pieces, flaps, or styling flairs. The milling process may not be a common production method for so many parts on a single motorcycle, but it permits a finely tuned manufacturing process with tight tolerances and repeatability. This approach explains why the milling machines at Arch are busy more often than not.

The gas tank comes in two pieces, both of which are milled as well. One half starts life as a 200+ pound piece of aluminum. After machining – a lot of machining – the end result weighs 3 pounds. The process takes so long that Arch uses a specialty vendor for the gas tank merely because the tanks alone would consume a single milling machine full time. Overall, only about 10% of the aluminum remains compared to the raw material at the outset. 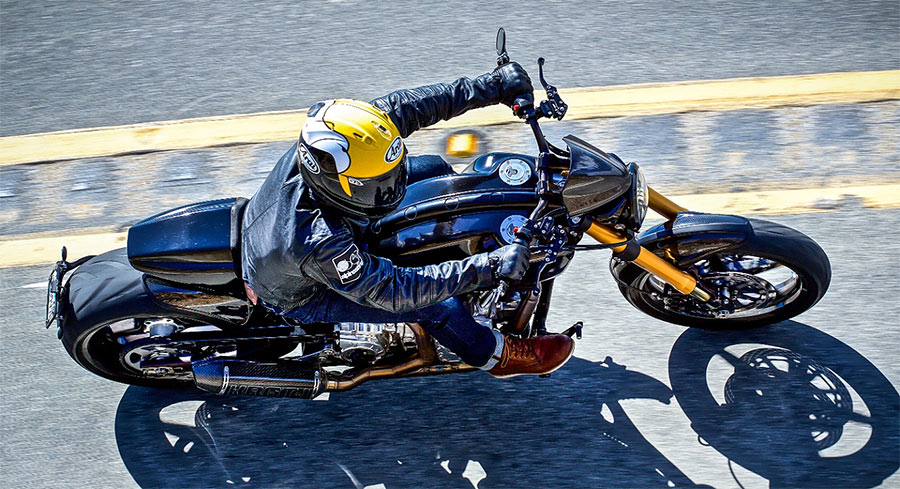 In the rare instances where Arch Motorcycle uses an outside vendor, Arch coordinates with the vendor to provide parts that are designed by Arch and are exclusive to Arch. A good example are the carbon fiber bits – including the wheels – that come from BST in South Africa. BST is one of the only companies that has been successful in making carbon fiber wheels and parts for motorcycles. Vendors recognize that Arch isn’t doing volume business, so there is more of a long-term partnership and investment into that relationship than might otherwise be the case.

Arch calls its approach “custom production.” The core design is clearly Arch and is consistent with each unit produced, but customers can select from an unlimited variety of control combinations and finish treatments. No two Arch motorcycles are alike. Arch works with customers to “curate” the design process. Some customers know exactly what they want and give explicit directions and get involved in the details. Others give the Arch design team preferences like favorite colors for design inspiration and then step back. 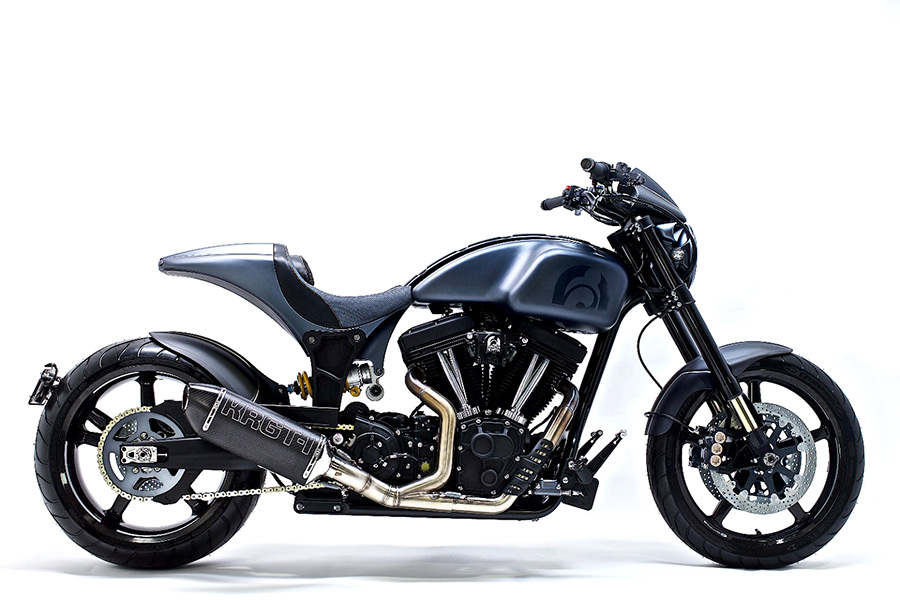 The Arch approach to manufacturing means that there are limited opportunities for economies of scale in production. Materials cost a certain amount of money and it takes a certain amount of time to mill parts. Production runs for parts are counted in the single digits. While Arch has become more comfortable and efficient with assembly and incorporating lessons learned along the way into its design and assembly process, the price point for the KRGT-1 is a function of the approach. As such, it is not going to drop with more units made and sold. 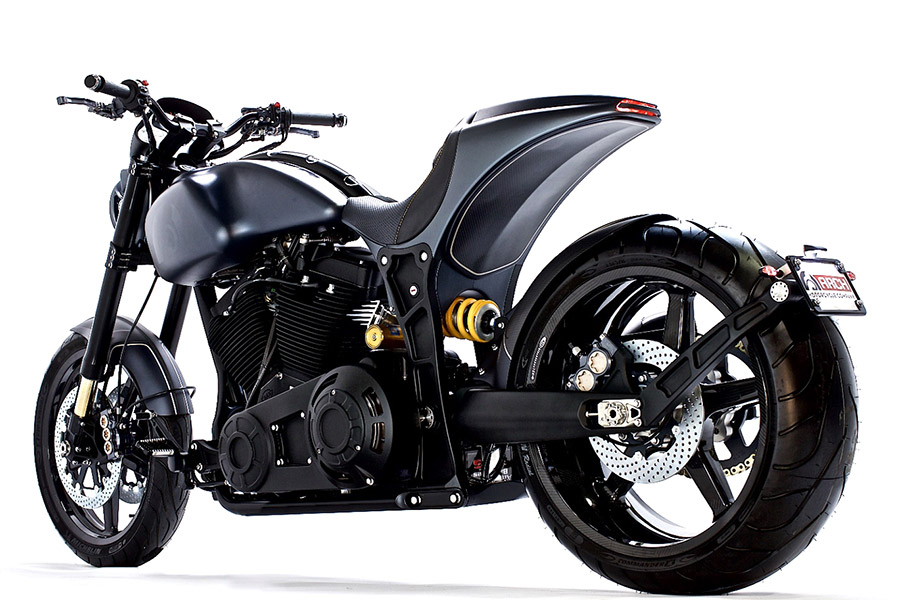 Third, the people at Arch want to build something with durability and build a family. They want customers who want to ride, not just put the pretty bike on display in the garage as a novelty or visual treat. So far, they seem to be attracting customers who appreciate design and like the entrepreneurial story.

Arch customers range from life-long motorcycle enthusiasts to first-time owners and riders. In fact, first time owners and riders may be one of the biggest and most rewarding surprises for Arch in its early days. Attracting new riders into the motorcycle community is a big challenge for all manufacturers and enthusiasts. There can be an element of concern for the uninitiated, so it takes an affirmative step to seek training and give it a try and Arch is quite proud of attracting the full range of customers into its family. 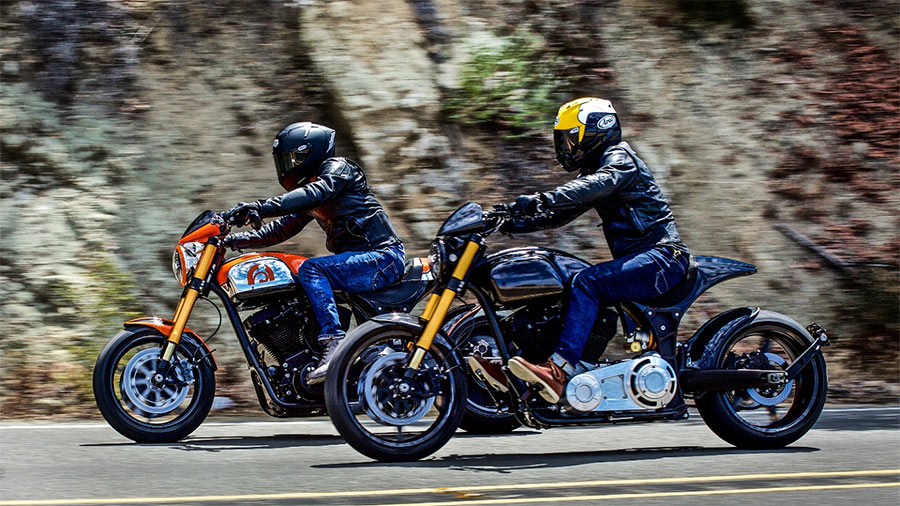 Where did Arch Motorcycle come from? It is a lifetime in the making.

Co-Founder Gard Hollinger has been involved with motorcycles since the age of 8. He first got the bike bug when his family lived in the Hollywood Hills. A move to the Pacific Northwest took him away from southern California when he was 12. He spent his teenage years and early 20s racing motorcycles on dirt, even racing professionally. He returned to Los Angeles after over two decades and established a motorcycle parts business called LA County Choprods which still exists. Gard is the day-to-day operational and design head of Arch Motorcycles but he’s not alone.

Arch Motorcycle was originally formed when someone referred actor Keanu Reeves to Gard for some custom work on his bike. Keanu had been into bikes for a long time, but was only starting to tinker with customizing and tailoring. He had some ideas and vision. The two moved beyond the original design question and started talking about what was possible. Over time and between movies, Gard and Keanu worked to develop and build a custom motorcycle for him. Keanu was clearly sold on the end result and convinced the initially reluctant Gard into creating a company for them to take the new bike into production together. 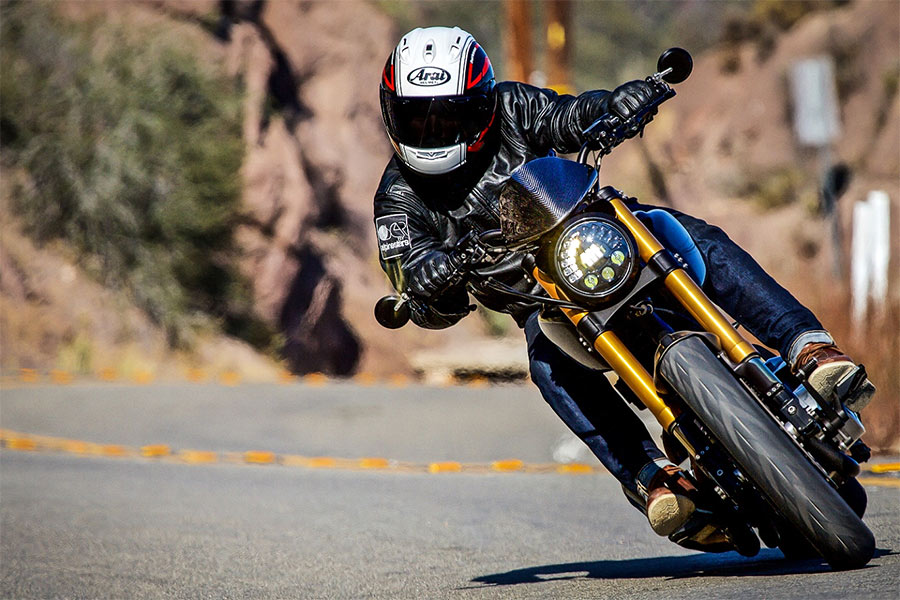 Gard is adamant that Keanu’s involvement is not a mere branding exercise. He is involved in the business and was instrumental in the “sport cruiser” approach. The actor’s day job means that he maintains a high public profile and some of that attention extends to the Arch project. Arch appreciates the support but has also steadfastly turned down the dozens of opportunities and offers to expand the brand and cash in on the celebrity angle. There may be chances to sell hats and t-shirts in the future, but the priority at this point is focusing on running a quality motorcycle business.

Likewise, Gard and Keanu have respectfully appreciated the interest in purchasing Arch parts, such as the Arch headlight or exhaust, but have also enjoyed the luxury of being able to say “no.” You also won’t find the Arch name on parts sold separately. Hollinger’s LA County Choprods business may get the benefit of some of the knowledge gained through Arch and make its own parts but one price of authenticity is bypassing the opportunities and risks of seeing Arch parts screwed onto other platforms. 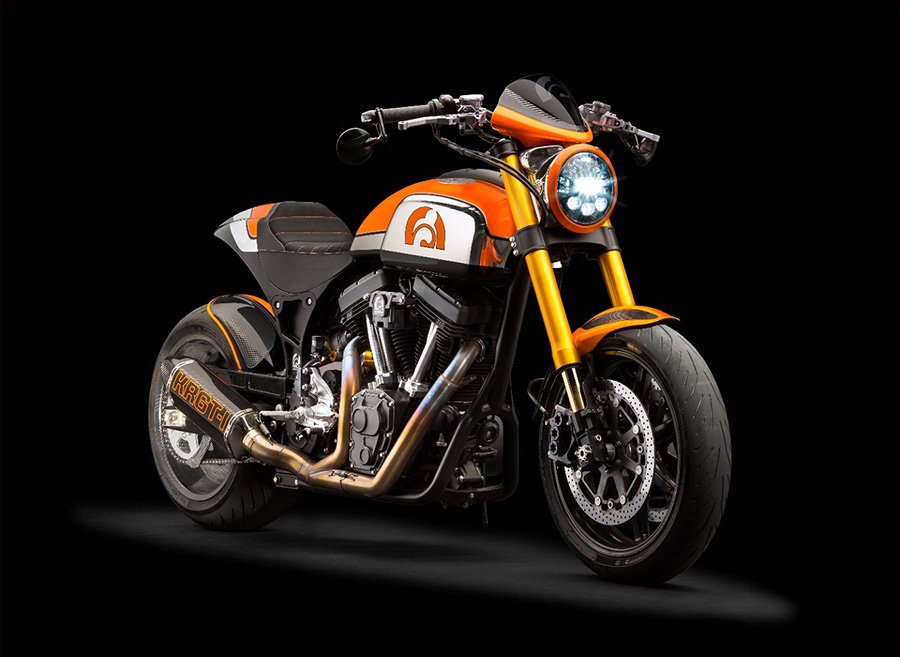 Running a quality motorcycle business involves more than merely building custom motorcycles. It requires preparing for the future. Not only is Arch fully EPA and California CARB certified, they’re on the verge of becoming Euro-4 certified to facilitate sales to European customers. Designing and building motorcycles is one thing, but navigating multi-jurisdictional regulatory hurdles is a big ask and accomplishment for a small company.

Broader certifications will set the stage for the next production ideas. Arch Motorcycle recently joined with Swiss company Suter Industries with the goal to make motorcycles for the European market. Watch for launch at Milan in November with deliveries targeted for late spring and early Summer next year. Interestingly, the exchange goes both ways with Arch planning to serve as a US outlet for Suter motorcycles as well. 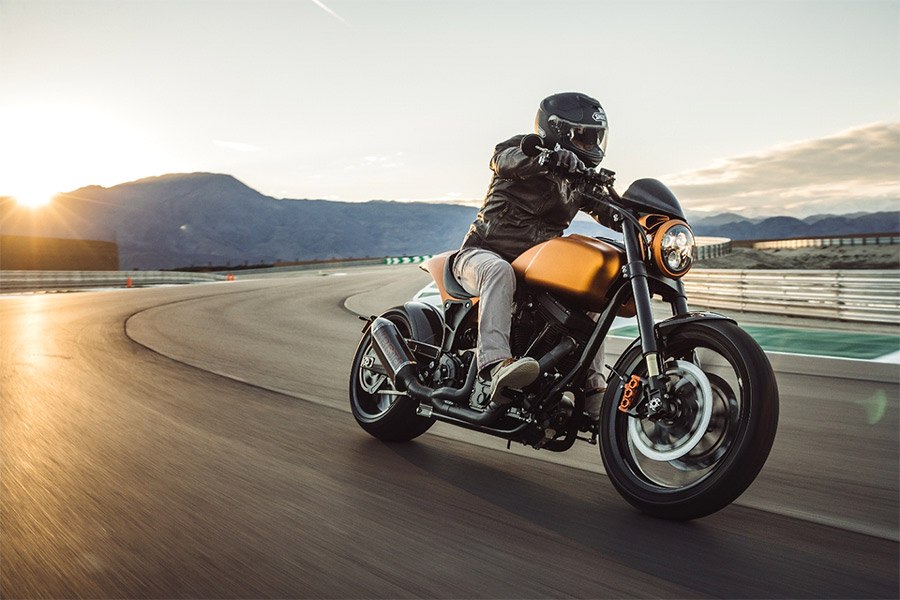 Arch is also looking towards using some of its design expertise and creativity to make a limited number of more concept type motorcycles. Speaking with Gard, it is clear that he has always enjoyed the design process and appreciates the tools, techniques and talent currently in the Arch orbit. Together with partner Keanu, there is an energy surrounding the effort and both want to create something that has lasting power well after both are gone.

The key benefit of the freedom to say “no” is the ability to say “yes.” New designs, new motorcycles, new customers, new markets, and new applications for the expertise all open up new opportunities. Arch has also sought to recruit staff and vendors that share the vision and enthusiasm.

One other side benefit has been the ability to give others a bit of support for their own vision as well. The racing blood that drove Gard on dirt in his earlier years has stayed with him, and the team at Arch shares it as well. After a chance introduction to 12-year old American motorcycle racer Damien Jigolev, who commutes from the US to race in the junior divisions in Italy, Arch found a US motorcycle racer with maturity, talent, humility and drive and a supportive family and offered to help. Arch wasn’t looking for a rider to support and isn’t in the sponsorship business. Gard swears that Arch only helps in a very small way, but keep your eye out for Mr. Jigolev on the world motorcycle racing scene. 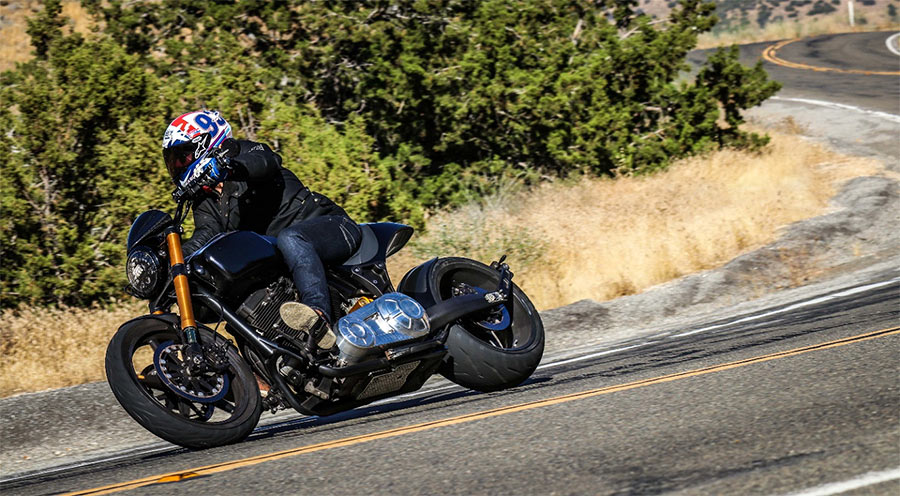 No question that Arch Motorcycle is more than a business with great ambitions. Arch Motorcycles is also making the most of advanced technology in terms of design, materials, and manufacturing. All of those things pale in comparison to the vision that Gard describes of riding an Arch Motorcycle through the Santa Monica mountains in the morning as the low cloud cover gives way to the bright sunshine on top of the peaks or a clear morning provides views up and down the coastline. That is the experience that Arch Motorcycle hopes to share and make an enduring part of the motorcycle culture for years to come.

More information about Arch Motorcycles can be found at https://www.archmotorcycle.com/