It’s always a good idea to spend a few minutes saying hello to an old friend when you have the chance.

During the SCCA Double Regional at Laguna Seca Raceway, Jeff Francis ran into longtime friend Larry Oka at the track. After catching up a bit, Oka let Francis in on his most recent project – restoring an FIA-spec Datsun 240Z that ran in the IMSA Camel GT series during the 1970s. The restoration would return the car to “as-raced” specification.

Even though the restoration was still in process, Oka was optimistic enough in the final result that he had entered it in the August Rolex Monterey Motorsports Reunion at Laguna Seca Raceway. Oka must have seen the glint in the eyes of Francis and offered him the chance to drive the 240Z in the upcoming event. Recognizing the unique opportunity, Francis accepted the proposition without hesitation.

Work continued during the months leading up to the event. Timing was going to be close, but Oka sent periodic photos of the progress. Less than a week before the race, another group of pictures arrived with one word: “Ready!”

Francis met Oka the following Wednesday in the paddock at Laguna Seca Raceway. He was fitted to the Z’s cockpit and briefed on starting procedures. Since the Datsun L-Series engine was built to full IMSA GTU specifications, it was temperamental at idle and required a constant throttle to keep the car running. Francis sat in the cockpit with a smile like a young child with his favorite toy. 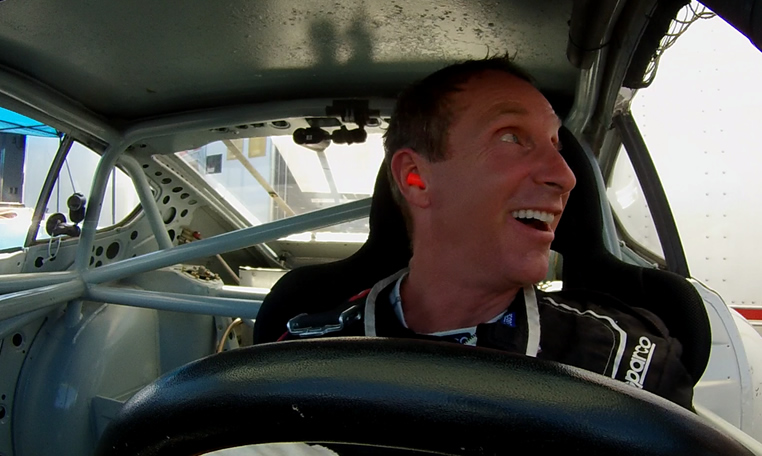 Thursday morning was the first opportunity to take the 240Z on the track. Before releasing drivers on course, the mandatory drivers meeting set the rules of the road and expectations. A familiar SCCA steward highlighted the differences between a typical amateur race weekend and running at the Rolex Monterey Motorsports Reunion. “These vintage cars are historically significant. They’re priceless. Rare. Irreplaceable. Some of these cars aren’t even privately held, but owned by the manufacturers themselves.” 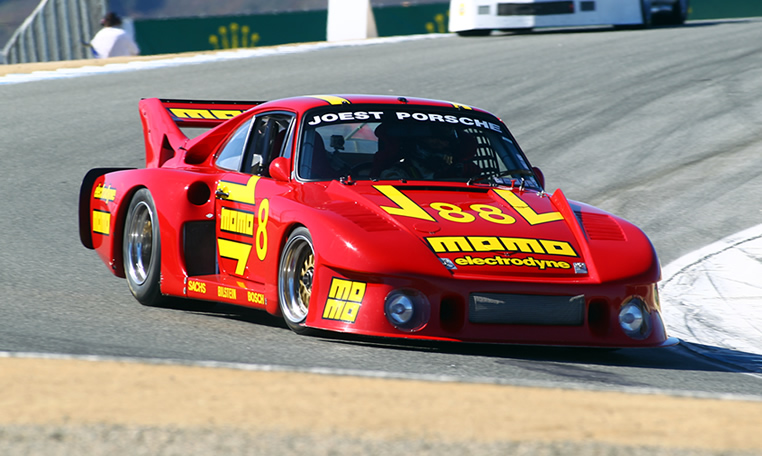 Just prior to heading out for the first practice, Oka reminded Francis that the temperamental engine operated in an optimal RPM range between 6000 and 7200 RPMs. Using low-end torque to power through the corners was not an option. “You’ll figure out the rest,” Oka confidently advised. As this would be the maiden voyage for the Datsun after its restoration, the first practice session was more of a shakedown session than a pursuit of pace or lap times. 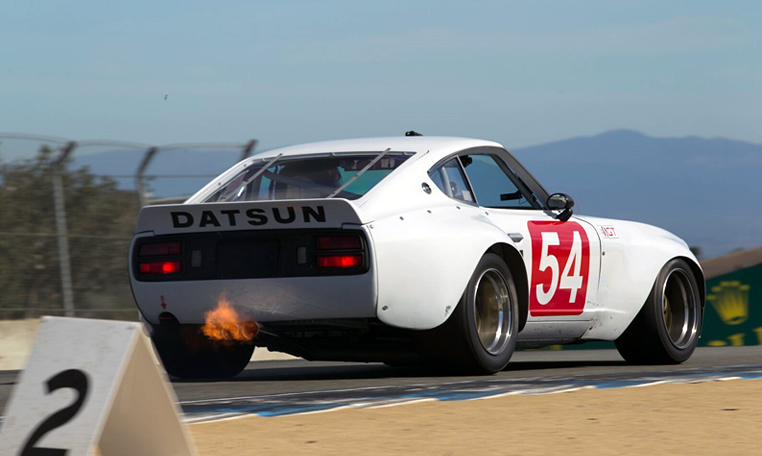 During the initial warm-up laps, it quickly became clear that the high RPM engine did not make for a quiet cockpit. Despite wearing ear plugs, a balaclava, and helmet, the exhaust note was deafening. 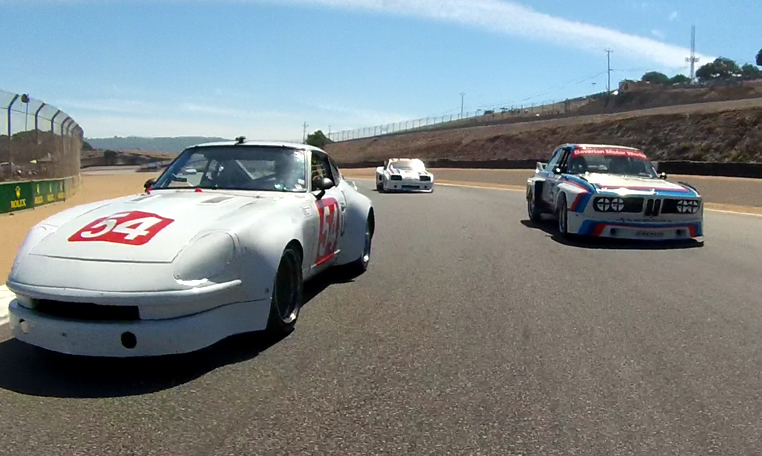 Francis used the first few laps getting used to the car and its quirks. With over 350 horsepower stuffed into a car that weighs only 2000 pounds, the handling was lively. Hammering over any small rise on the track would result in the car getting a bit light and then settling on a slightly different line on the back side of the crest. 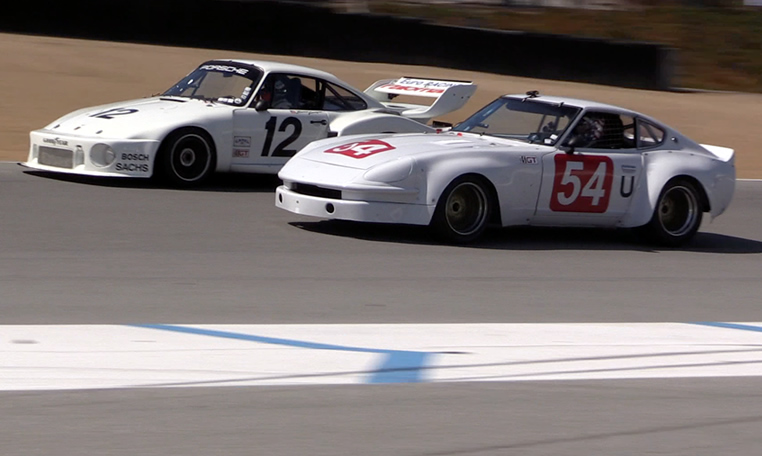 As the session progressed, the steering rack began to shift slightly within the rubber bushings. Managing the uncertainty, Francis dialed back the aggression in the corners. With only a few laps remaining in the session, the driveshaft u-joint snapped, severing the rear brake line and bringing an eventful first outing to an end. Luckily, the failure happened in a good place and Francis stopped safely along the pit straight wall.

Friday morning ushered in a second round of practice. The prior day’s steering issues were resolved and the broken u-joint replaced. On the other hand, the brake pedal softened and the clutch seemed to be struggling. Regardless, Francis and his Datsun took to the track along with a group of 40 cars. Fortunately, the practice session was uneventful and Francis was able to explore the limits of the car and gain confidence in its handling and performance.

The afternoon qualifying session would be the last opportunity to acclimate to the Z before Saturday’s race. While the car was new to Francis, Laguna Seca was not. Freshly bled brakes gave a firmer pedal and more confidence in the corners where time was waiting to be found. Even after decades of dormancy, Francis utilized his track knowledge to record the fastest lap for the Z in nearly 30 years and secured a respectable spot on the starting grid. 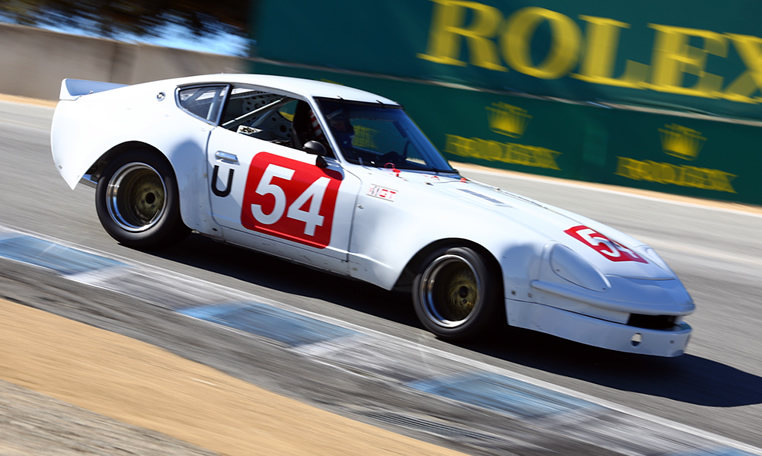 Saturday meant race day. A morning race and an afternoon feature race filled out the schedule for Francis and his Z which were slotted in with FIA, IMSA GT/GTX/GTU/AAGT cars from 1973-1981. With a two-minute warning from the track stewards, drivers fired up their mounts as they staged in pit lane for the first race of the day. The idling chorus of widely varied race engines resonated off of every surface. Even though Francis has raced for many years, the moments before the field was released gave a brief chance to reflect and savor every bit of the unforgettable experience of racing in the Rolex Monterey Motorsports Reunion. 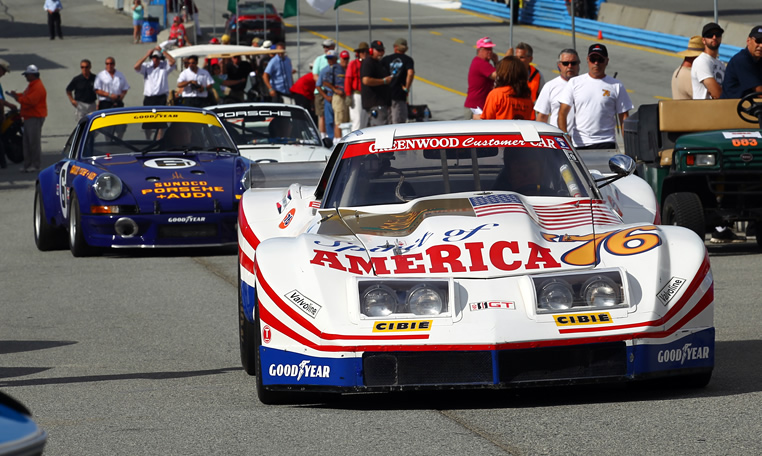 The pace lap provided the chance to scout nearby competitors in the 40-car grid. The category featured many racing machines with voluptuous fender flares, towering wings, and fat racing slicks. An original Dekon Monza and a Porsche 935 rolled alongside a BMW M1 and a 911 RSR. While Porsches and BMWs dominated the field, Francis and his Datsun joined Ferraris, Corvettes, Fords, and Alfa Romeos to fill out the grid. 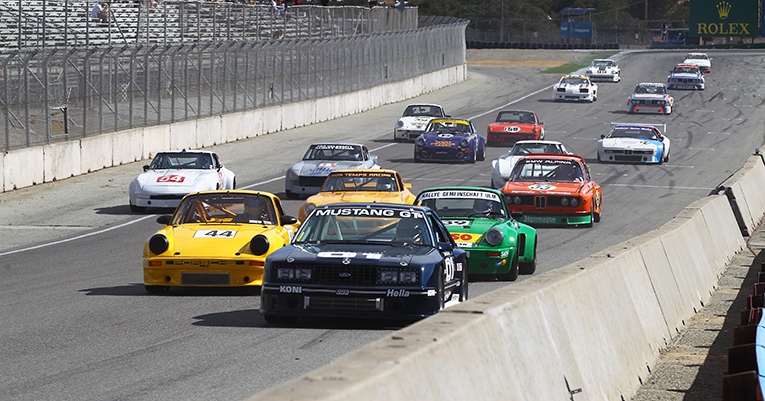 At the rolling start, Francis fell back slightly, creating extra space to get a run and compensating for the Z’s lack of low-end torque. The strategy was successful. The well-timed start leapfrogged the #54 Datsun past nine cars on the outside before the Andretti Hairpin and an optimal line through the next turn preserved the position. 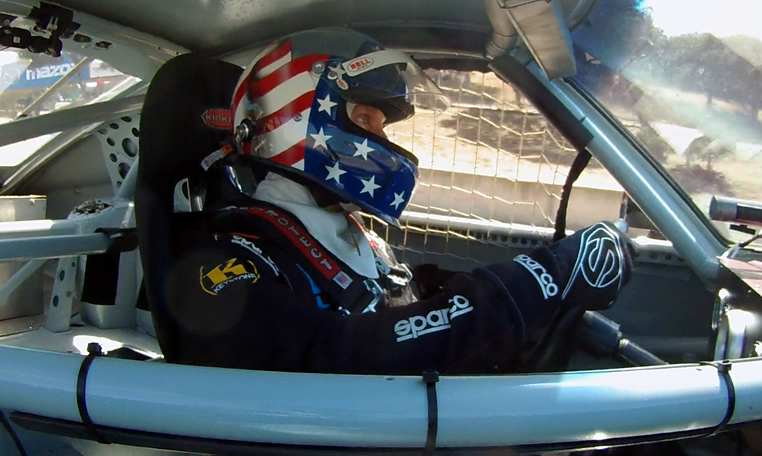 The most formidable Datsun competition was a rival 240Z, piloted by Datsun racing legend John Morton. A former factory Datsun driver for the famed BRE team, Morton claimed wins at both LeMans and Sebring, as well as a Trans-Am championship. The combination of car and Morton at the wheel proved too quick for Francis and his Z, but his aggressive start put Francis door to door with a pack of much more powerful cars. 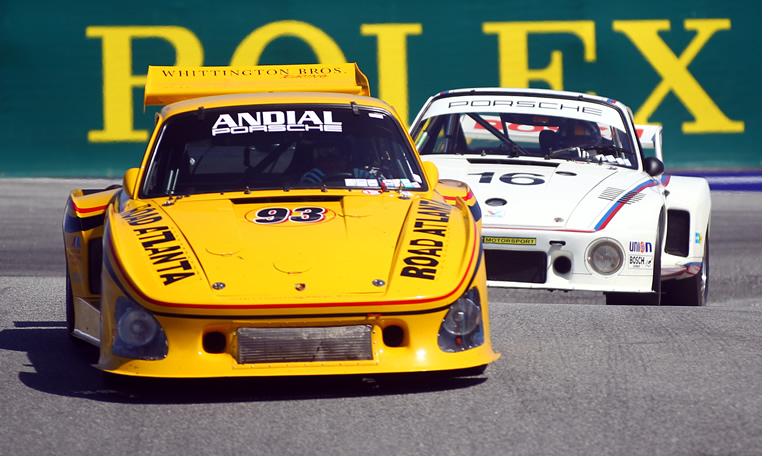 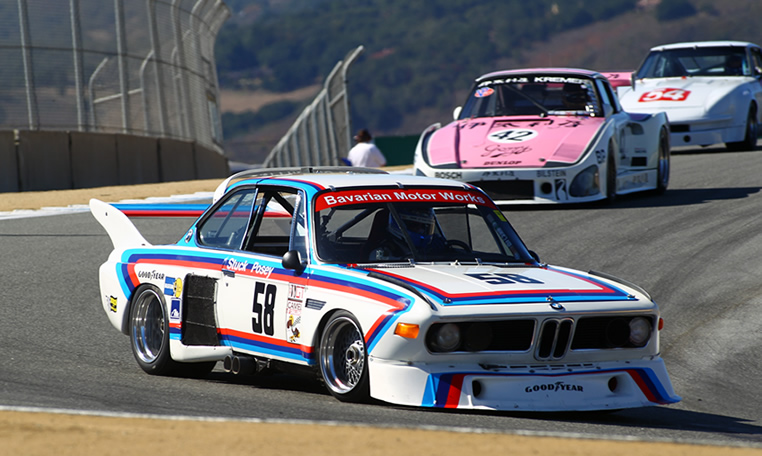 With tires now at optimal temperature, lap times across the field began to drop. A battle between two Porsches and a BMW raged in Francis’ rear view mirror as both jockeyed for the chance to reclaim their lost track position. A BMW CSL attempting to slice around the outside of Francis pushed the limits too far, spinning across the track and barely missing an oncoming 911 RSR. The Porsche celebrated its good fortune for a few laps before dreaded lift-off oversteer sent it into a tank-slapper in Turn 9 and another near miss. While these were historic cars at a high-profile vintage race, the field circulated at a frenetic pace rather than logging leisurely exhibition laps. Francis recalled the cautionary words at the driver’s meeting and kept his pace while balancing the risks in dicing with others. 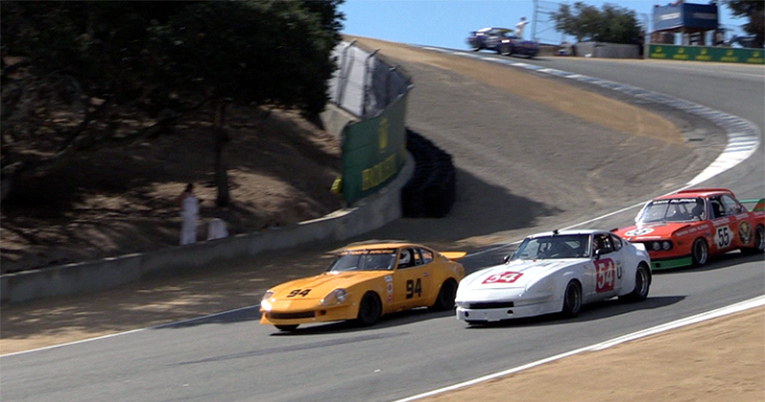 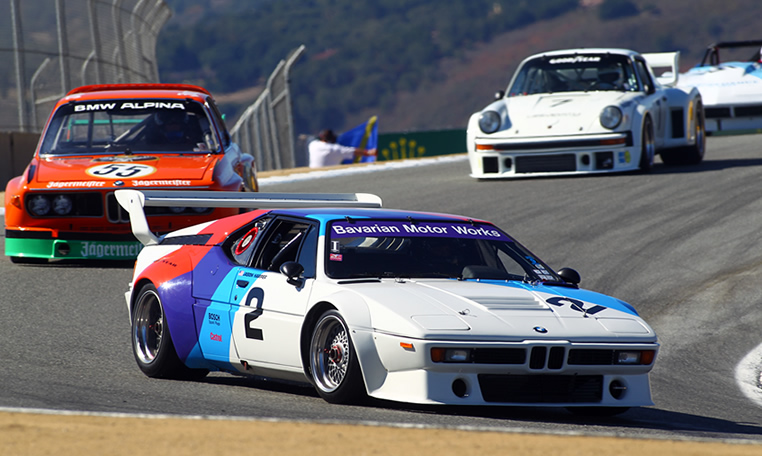 With two laps left, the Z’s oil bypass tube became dislodged. Blue smoke poured from the engine bay into the driver’s compartment, filling the air with the scent of burning petroleum and ending Francis’ race prematurely. The crew recovered the car and retreated to the paddock to attend to the stricken Z.

The crew had repaired the oil bypass tube in time for the afternoon feature race. The clutch, however, could not be repaired so Francis needed to nurse it through the weekend’s final event.

The Datsun could not repeat the electric start of the first race, but Francis found a rhythm and began climbing up the running order. The Z quickly passed two BMW CSLs, two Porsches, and a Corvette. Laps four and five saw the plucky Datsun claim two more positions courtesy of a flame-spitting Porsche 935 and a stunning 240Z previously raced by Clint Eastwood and Gene Hackman. 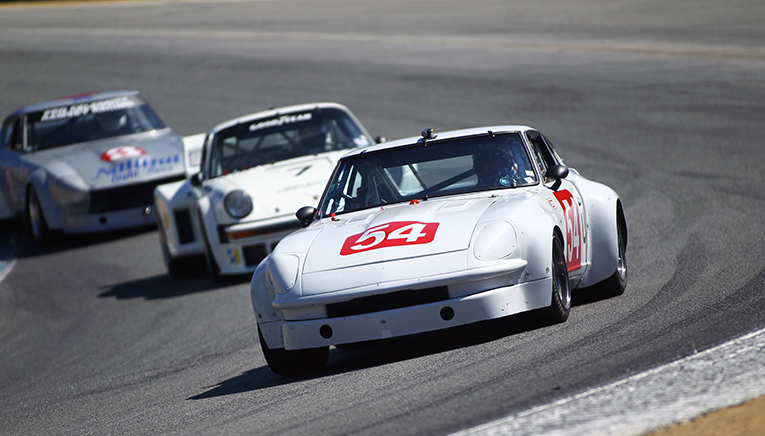 On lap seven, at the end of the fast uphill straight just before the Corkscrew, the engine stalled during a downshift. The wail of the Datsun was replaced by deafening silence. Coming over the crest, the Z again got light and compressed the stiff suspension. The chassis settled as Francis eased onto the brakes and released the clutch. The rear wheels briefly locked and the car squirmed in an effort to regain traction. Fortunately, the tires hooked up, the motor reignited and the Datsun was set up for the Corkscrew. It was a heart in the throat type moment. “Sometimes, it’s better to be lucky than good,” Francis recalled. 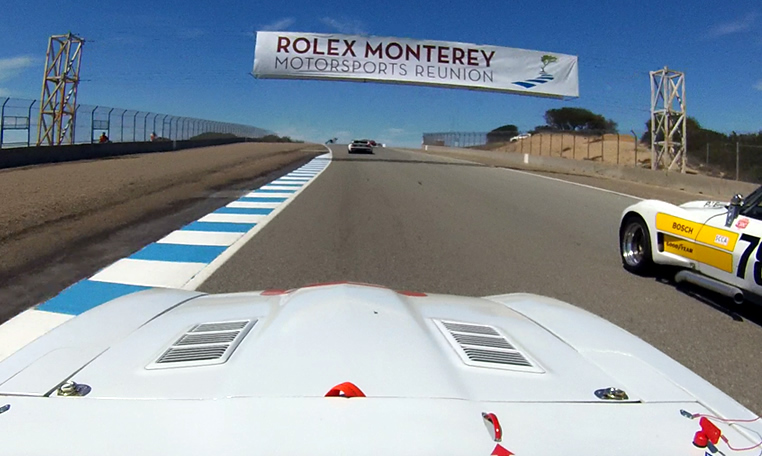 Near the end of the race, the tired clutch began to slip more severely. The untimely stall and moment of drama before the Corkscrew did not help. Francis transitioned into preservation mode to ensure a finish. Despite the issue, Francis and his Datsun yielded only four of the seven positions gained over the course of the race. The checkered flag waved and a wave of both fulfillment and relief washed over Francis on the cool down lap. Oka and his crew, Elvis and Todd, exhaled their own sigh of relief from the pit wall. They did a remarkable job to get the car into race condition and keep it on the track during the weekend. 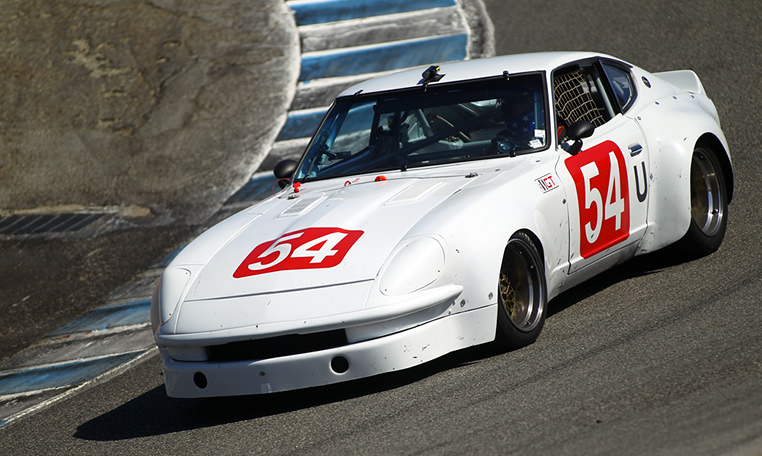 The story of the 240Z was merely one car in one class at the Rolex Monterey Motorsports Reunion. Each of the other 40 cars in the class had their own compelling stories of triumph and tribulation. Multiply that by the several hundred cars across all of the classes in action and the number of stories that crews, owners, drivers and spectators have to take home each had their own unique weekend experience.

The Rolex Monterey Motorsports Reunion is undoubtedly about the cars, but the weekend would not be possible without the people. Larry Oka and his restoration project were only one of those stories in the paddock. Countless spectators watched with interest and stopped in the paddock for a closer look at the 240Z. Everyone seemed to have a story involving a Z from their past which made for a series of genuine connections between Oka, his crew, and their new friends. The IMSA 240Z was so popular that one enthusiast even made a serious unsolicited offer to buy the car between the two races. 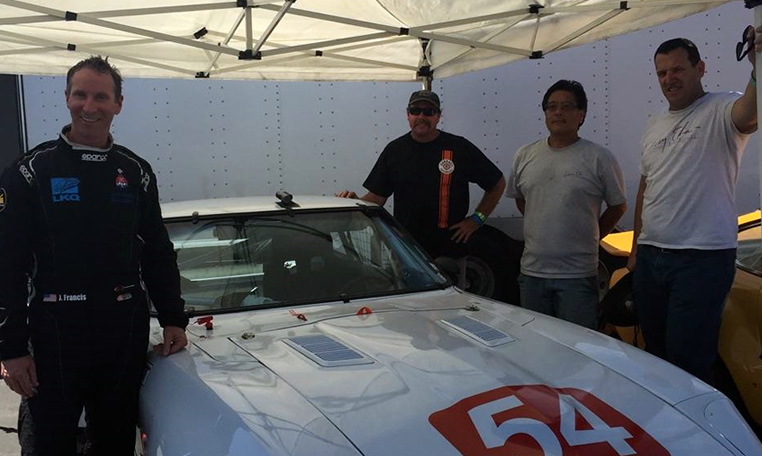 Reflecting back on the weekend, Francis was pleased to get seat time in an iconic vintage race in a memorable competition car. Mission Accomplished. 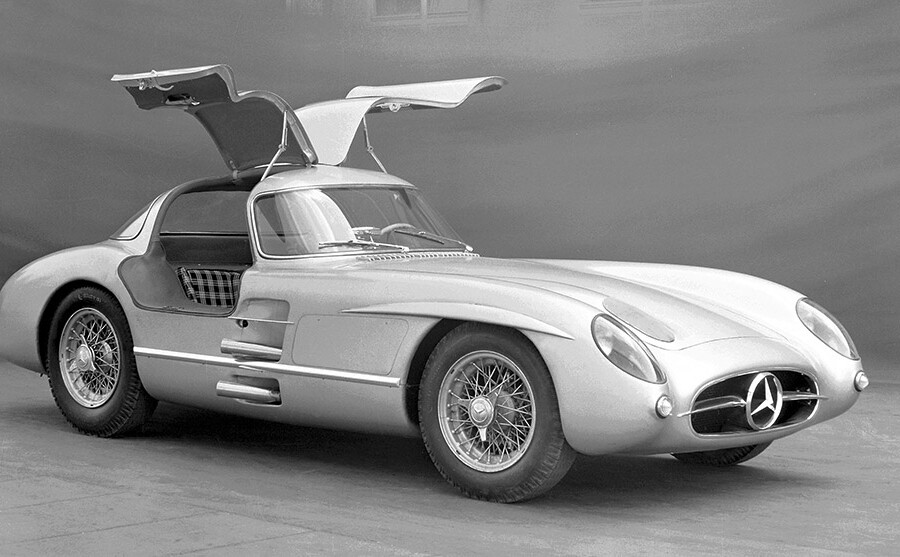 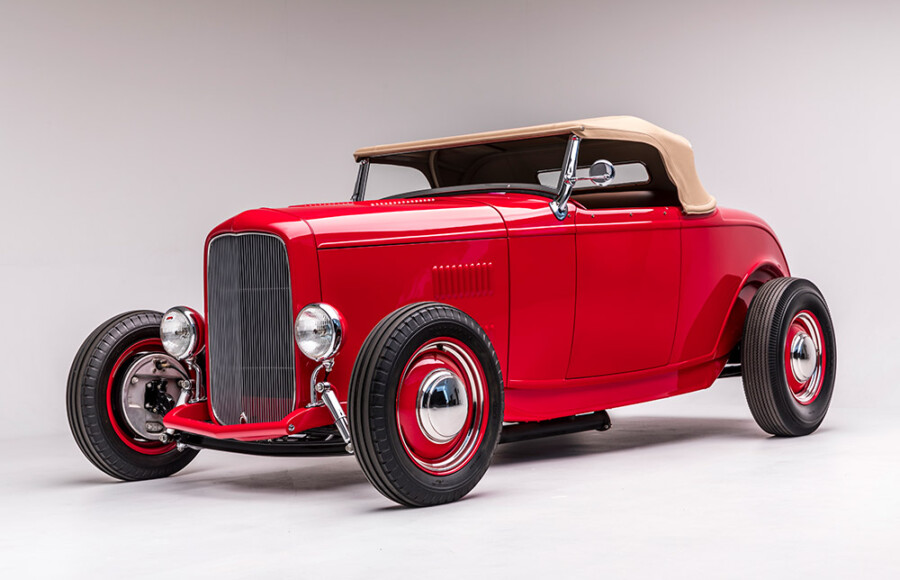 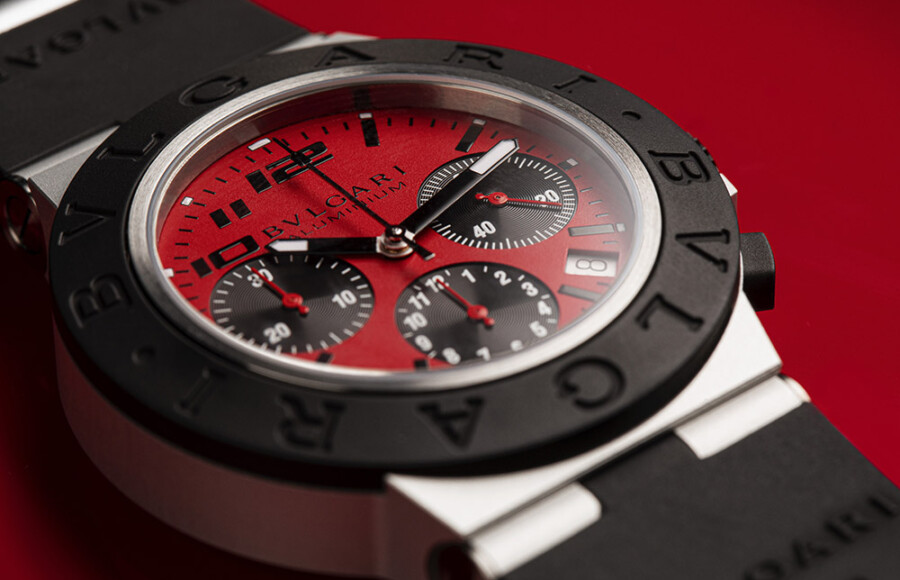 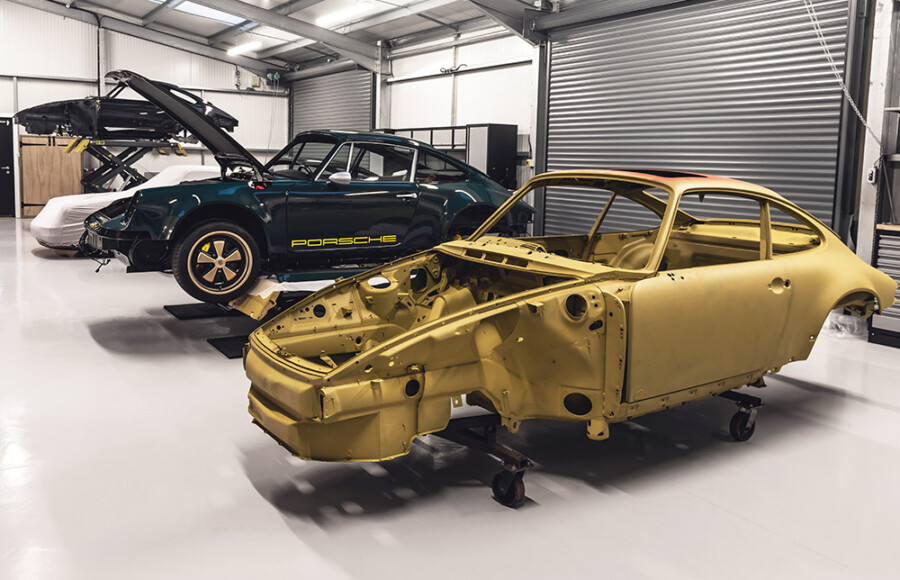 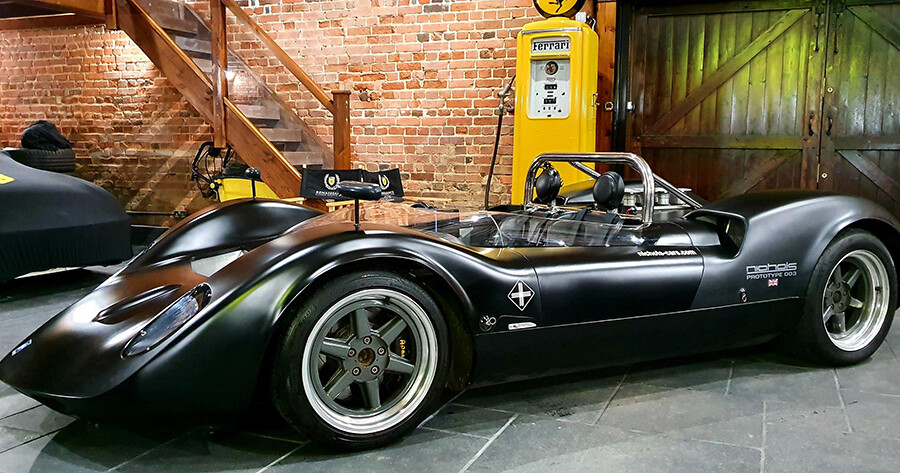 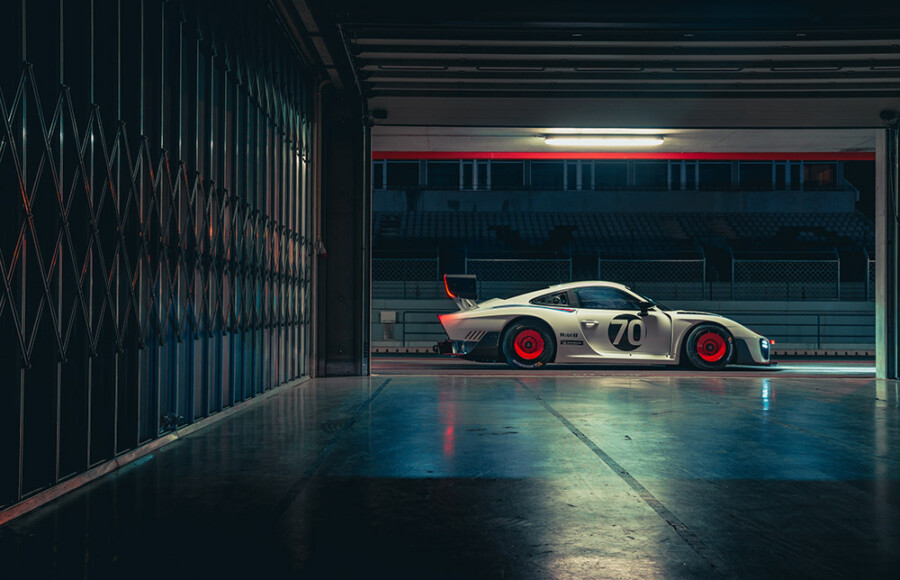 Porsche Announces Dates and Location for Next Rennsport Reunion