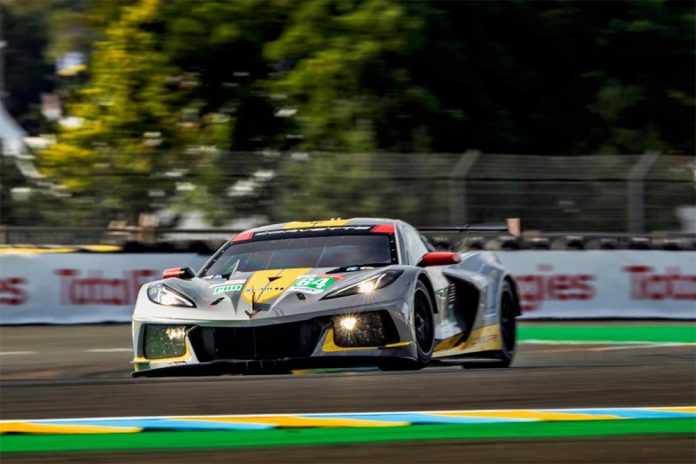 Two decades of Le Mans excellence were put on pause last season for the mighty Corvette Racing team due to the COVID-19 pandemic. Now, its drivers return to France’s Circuit de la Sarthe this week eager to regain their championship form in the 89th running of the 24 Hours of Le Mans.

“We don’t take going to Le Mans for granted,’’ driver Tommy Milner said. “Not going there last year, though, reminds you how special this race is and how important it is for the team, for Corvette and Chevrolet.

“This is a race that for a lot of people is a bucket-list item. To go there once is special. Each time going back is more so.”

Antonio Garcia and Jordan Taylor, leaders and defending champions of the GT Le Mans (GTLM) class in the IMSA WeatherTech SportsCar Championship, will drive with Nicky Catsburg in the No. 63 Corvette C8.R. Milner, Nick Tandy and Alexander Sims will team in the No. 64 entry as Corvette looks to earn a Le Mans victory with its fourth different generation of car.

Each of those previous generations was a front-engine model. This year marks the Le Mans debut of the mid-engine C8.R Corvette and it has already proven itself up to the endurance task. The Corvettes finished 1-2 at the Rolex 24 At Daytona in January.

Garcia and Corvette legend Oliver Gavin also took the car to the Six Hours of Spa in a Le Mans dress rehearsal this spring and finished fourth in GTE Pro.

Certainly, with Corvette’s longstanding track record, the expectations are high. At Le Mans, Garcia has a team-best three previous wins (two with Corvette). Milner has two wins with Corvette and Taylor one. Tandy was a 2015 Le Mans overall winner in the Le Mans Prototype 1 (LMP1) class.

Although a pair of Porsches topped the GTE Pro class Test Day practice chart Sunday in France, Garcia remains particularly encouraged about the Corvette’s chances at a ninth trophy.

“This car should be better (than previous generations) and that’s what we expect,’’ Garcia said. “We saw that at Spa, that we’re close to our competitors. So it was a good event for the team to get used to WEC rules and strategy. Now once we get to Le Mans, it should be an easier time to get into the mindset having been through it before.’’

Tandy, who has eight previous Le Mans starts and last podiumed in the GTE Pro class in 2019 with Porsche, said the Corvette’s 1-2 performance in the Rolex 24 should be a good indicator of what to expect this weekend in its second twice-around-the-clock test.

“There are a lot of similarities (between Daytona and Le Mans),’’ Tandy said. “They’re both 24-hour races, obviously. The kind of running the car goes through is similar with the flat-out running you do compared to something like Sebring.

“There are a lot of high-speed sections at Daytona like there are at Le Mans. The car proved ultra-reliable, consistent and quick at Daytona, so this is a big positive going into Le Mans.”

The cars were fast on Test Day despite some mechanical hiccups, with Catsburg setting the fastest time among the group.

“We didn’t do as many laps as we wanted to get in today, but the guys did a good job to give us as many laps as possible,’’ Taylor said of the No. 63, which required an engine change midway through the Test Day but backed it up with Catsburg’s fast lap.

“It’s the first day of the new car at Le Mans, so every lap is important to get our data and understand where we’ll be next week,” Taylor continued. “Each driver got some laps – in traffic and in clean air – which is important for the race. We probably have a lot of things we want to tick off the list still, come free practice, but I think it’s good to get this under our belt, get a couple days off and look at all the data and understand where we are.’’