Antron Brown couldn’t have dreamed of a better way to close out the famed Atlanta Dragway on Sunday, becoming the winningest Top Fuel driver at the historic facility with his fifth victory at the 40th and final Lucas Oil NHRA Southern Nationals. Bob Ta …

By: NHRA | Photos Courtesy of: NHRA 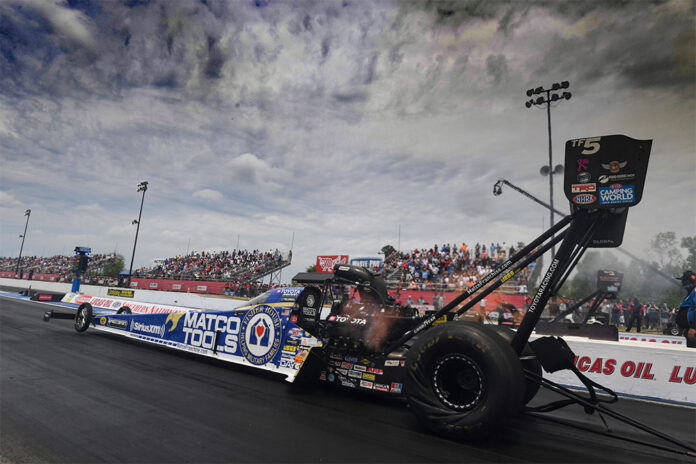 Antron Brown couldn’t have dreamed of a better way to close out the famed Atlanta Dragway on Sunday, becoming the winningest Top Fuel driver at the historic facility with his fifth victory at the 40th and final Lucas Oil NHRA Southern Nationals. 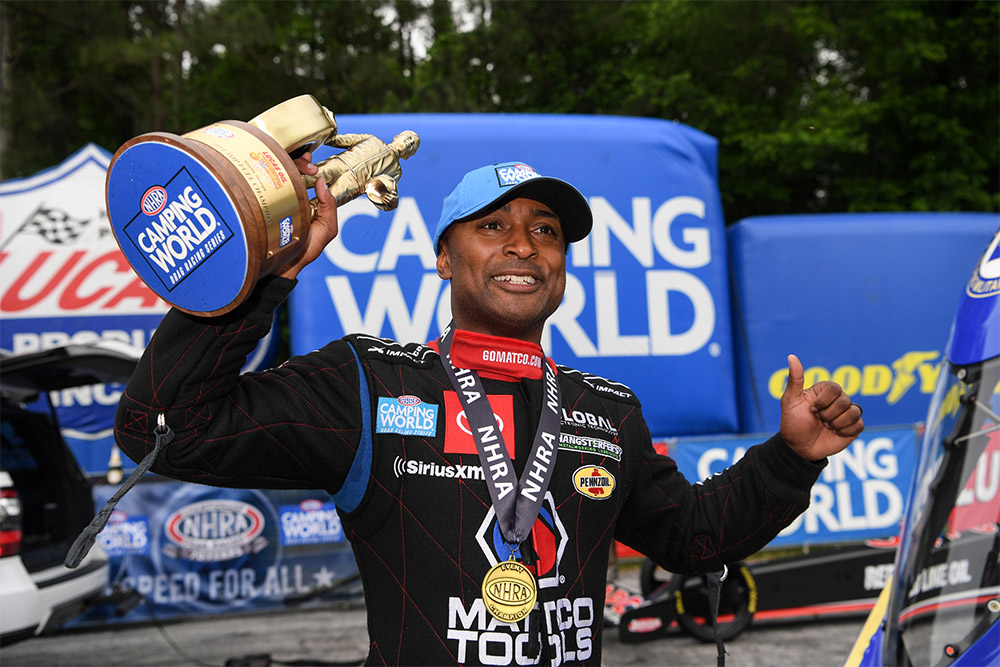 Brown defeated three-time reigning world champ Steve Torrence in a thrilling final round, going 3.752-seconds at 323.81 mph in his 11,000-horsepower Matco Tools dragster to beat Torrence’s 3.794 at 323.81. Brown, a three-time world champ, beat Doug Kalitta, No. 1 qualifier Billy Torrence and Brittany Force to advance to the final round, making his best run of the weekend when it counted. Brown leaves Atlanta Dragway with seven overall victories, including two that came in Pro Stock Motorcycle, while Sunday’s triumph also gave him 68 carer wins. It was a meaningful victory for Brown, who beat his close friend Torrence in the final pair of NHRA Camping World Drag Racing Series competitors to go down Atlanta Dragway.

“That’s Rocky Balboa right there (referencing Torrence) and I’m Apollo,” Brown said. “To get this win, it was truly remarkable. We just built on it every lap. Any time you can do this and get one of these (Wally trophies), it’s just so special. Atlanta has just been so special to all of us.”

S. Torrence advanced to his 64th Top Fuel final round on the strength of wins against Buddy Hull, Justin Ashley and Shawn Langdon, staying in the points lead. 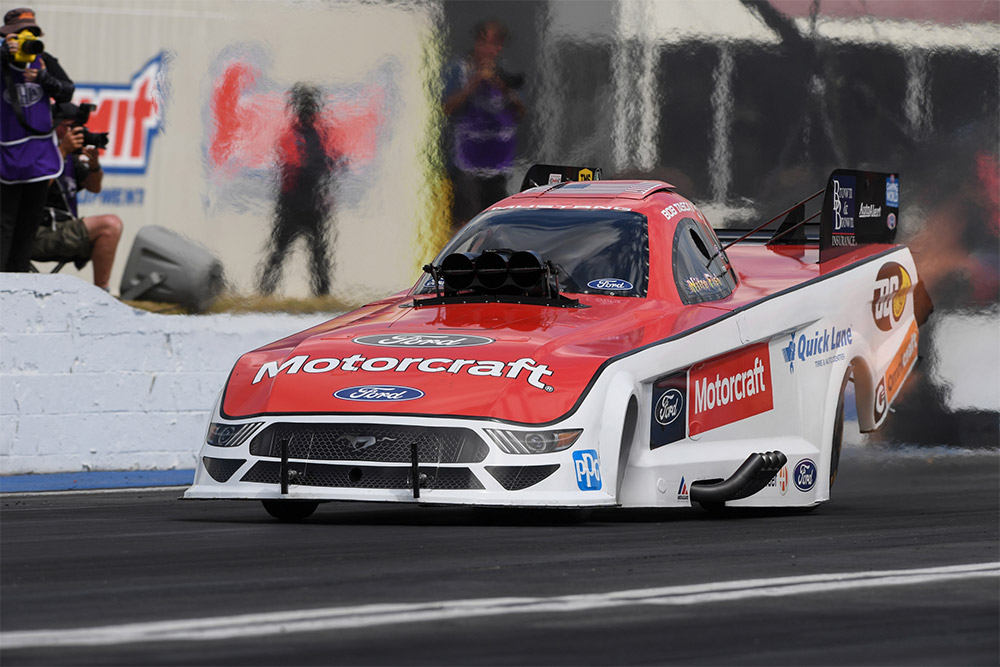 Tasca III picked up his second straight victory in Funny Car, with Sunday’s triumph against John Force one he will always remember. He went 4.004 at 326.48 in his 11,000-horsepower Motorcraft/Quick Lane Ford Mustang in the final round, beating Force’s 4.015 at 321.81, claiming his eighth career victory. Tasca maintained his points lead in the class, cemented himself as a certain championship contender and won for the first time in Atlanta. He picked the perfect time, adding a historic win at the final race at Atlanta Dragway to his growing resume.

“There’s nobody who has done it better than Force over the years and it’s an honor to roll up next to him, but there’s nobody I get up for more and to beat him in the final, it’s great,” Tasca said. “I want to thank all the Atlanta fans. It’s so special to be here and see this place sold out. There’s so many great memories and it’s so great to leave with the trophy. For all those Ford fans and all the Ford family members that called me (after the last race) after winning Vegas, we did it again.”

Tasca beat Paul Lee, Blake Alexander and defending world champ Matt Hagan to reach the final round. Force reached his 257th final round with victories against Cruz Pedregon, Ron Capps and J.R. Todd, producing a series of entertaining runs for the huge crowd at Atlanta Dragway on Sunday.

There was no stopping points leader Anderson on Sunday in Atlanta, as the four-time Pro Stock world champion furthered his dominant start to the 2021 season with a superb performance on Sunday. He took out Vincent Nobile in the final round in his DENSO Chevrolet Camaro, going 6.568 at 209.04 against Nobile’s 6.598 at 208.78. It handed Anderson his second victory this year and 96th in his career, putting him one away from tying Warren Johnson for the most in Pro Stock history. It also gave the longtime standout his fifth victory at Atlanta Dragway in the final race, which ties him with Johnson and gave Anderson a memorable send-off at the facility. 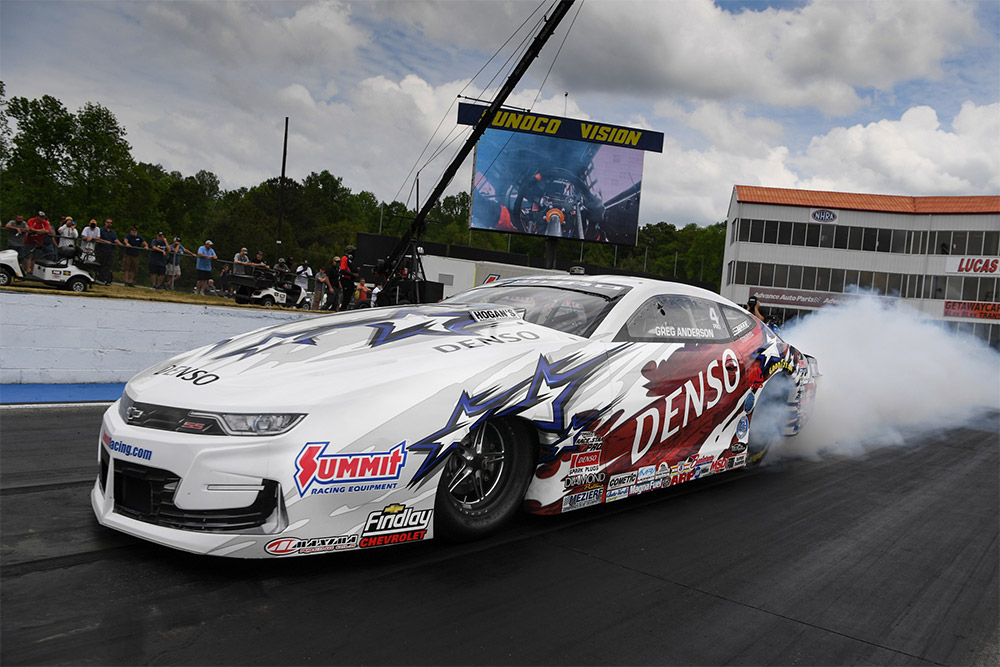 “It was an absolute dream weekend. My DENSO Chevy, it was absolutely flawless all weekend long,” Anderson said. “I’ve never made four smoother, nicer runs on raceday than this. It’s just been an awesome day and a storybook deal. There’s a lot of history here and I love racing here. To tie Warren and to go out with five each, it’s great. It’s been a dream, it’s been wonderful and I want to thank everyone who has helped us.”

In an all-Matt Smith Racing final round, Scotty Pollacheck claimed the victory over his teammate, as Matt Smith went red by a mere .001, handing the victory to Pollacheck on his DENSO/Strutmaster/Matt Smith Racing EBR. Pollacheck, who was the No. 1 qualifier, went 6.921 at 198.35 to claim his second career victory, with the first one also coming after he qualified No. 1. He was solid throughout eliminations, beating Jerry Savoie, Ryan Oehler and Angelle Sampey to reach his ninth career final round. 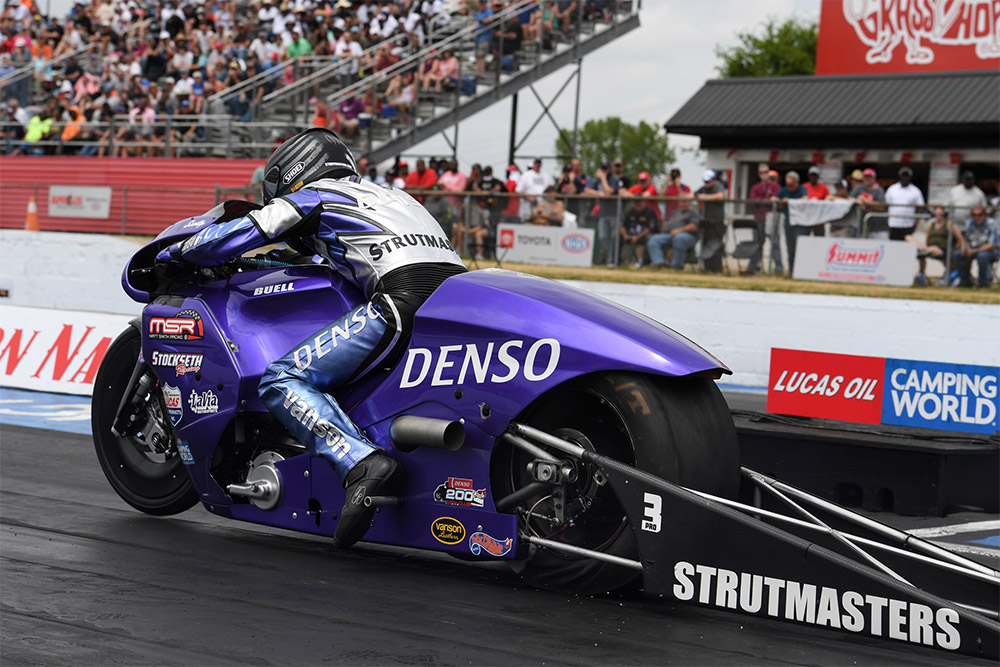 “This whole team did so well with two bikes in the final round, and Matt is the man,” said Pollacheck, who jumped to second in points, just three behind Smith. “He gave me one there because mine bogged down in the finals, but it’s going to be a big celebration tonight. This was awesome and it’s just a great team.”

Smith reached his 60th career final round and second in 2021 thanks to round wins against Steve Johnson, Joey Gladstone and Eddie Krawiec.

The NHRA Camping World Drag Racing Series returns to action May 14-16 with the NGK NTK NHRA Four-Wide Nationals at zMAX Dragway in Charlotte.