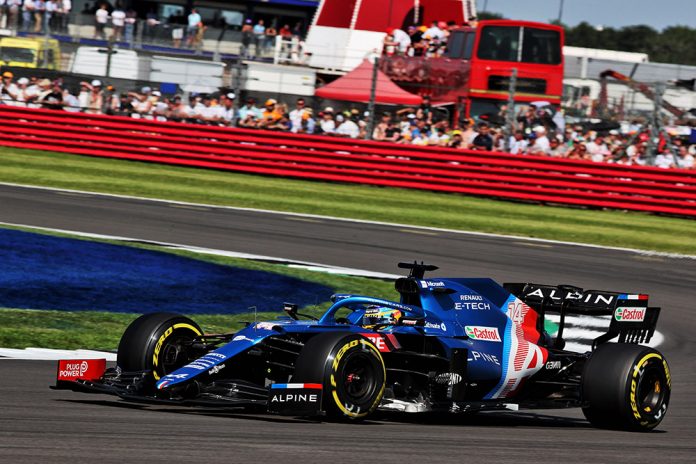 Alpine F1 Team claimed double points in the British Grand Prix after Fernando Alonso and Esteban Ocon battled to seventh and ninth place respectively in a thrilling race at a packed-out Silverstone.

The result means Fernando stretches his points-scoring streak to five races with Esteban returning to the points for the first time since Monaco.

Despite finishing in their starting positions, it was far from plain sailing to the chequered flag.

Off the line, Esteban enjoyed the stronger start and was unfortunate to be caught in a tight gap between Fernando and Sebastian Vettel. Both drivers were able to escape without major damage with Fernando holding seventh and Esteban tenth at the end of lap one.

The race was red flagged after an incident between Max Verstappen and Lewis Hamilton at Copse, with barrier repairs bringing a 30-minute delay to the race.

At the second standing start, Fernando gained a position to sixth with Esteban maintaining tenth. Esteban then progressed to ninth on lap five after passing Kimi Raikkonen with Fernando dropping a place to Carlos Sainz.

Esteban pitted for new Hards on lap 19, with a slow-stop for Fernando for Hards on lap 24 momentarily costing him a place to Lance Stroll, which he soon recovered with a dive into Brooklands.

Esteban dipped outside the points after Pierre Gasly’s overtake on lap 29, but with Sergio Perez pitting on lap 38 and Gasly on lap 48 for a puncture, Esteban was able to progress his way to ninth, which he held at the chequered flag. Fernando comfortably held Stroll at bay for seventh place.

Thanks to the double points finish Alpine F1 Team regains some ground in the Constructors’ Championship compared to its rivals and now heads to the Hungarian Grand Prix hoping to make further in-roads.

Esteban Ocon, started P9, finished P9:
“It was not an easy race today with everything going on; the red flag, two standing starts, but we’re back in the points and that feels good. It was nice to be fighting and getting the maximum from the car. Tyre management was challenging today but we did everything well. Of course, you always want more, but as a team, we have both cars in the points today and that’s a great reward for everyone’s hard work. We’re back on the pace after three difficult races and we aim to keep this going now through to Hungary. We’ll be preparing and working hard for that, to make sure we back this result up. I’m glad Max is OK after the incident, and I wish him a speedy recovery.”

Fernando Alonso, started P7, finished P7:
“It was a good result today and I am happy to score more points for the team. It was a very long, hot race so it was very challenging. I thought we managed the temperatures and the tyres in a good way, and we also kept enough of a gap to Lance (Stroll) behind. We made some good calls on strategy and executed everything well. It was a little bit of a different weekend and we’ll have to see if the fans enjoyed it. We now have two weeks until we go again.”

Marcin Budkowski, Executive Director:
“Overall, it’s been a positive weekend for us; a great Sprint, double points and nice to see Esteban back to form. The race didn’t start the best way with Fernando having an off on his way to the grid and damaging his diffuser. We made all the repairs we could on the grid but had to start the race with a slightly damaged car and a performance deficit. Both drivers lost some positions at the start, but it went a lot better on the restart after the red flag. From that point on, it was a very well-managed race from a strategy and pace point of view. Fernando actually managed the pace in a very strategic way by creating a DRS train to protect his position. It was a while since we placed both cars in the points and it allowed us to outscore our nearest competitors in the Constructors’ Championship. We also send our best wishes to Max and hope he is OK.”