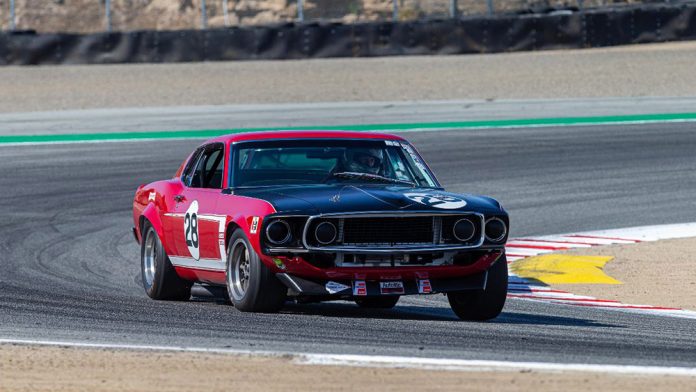 The Rolex Monterey Motorsports Reunion that concluded August 15 annually recognizes the camaraderie of the gathering, and accomplishments of the drivers and their cars above all else. It is not about winning, but about sharing their authentic cars’ history with others and enjoying them safely at speed.

The Spirit of Monterey – This award is presented to the driver or entrant who excels in the weekend and embraces the spirit of the event.

The Rolex Awards – Rolex is a longtime supporter of major international sporting events. The Rolex Awards are presented to a driver who represents Overall Excellence in each afternoon Rolex race.

Group 4B: Ragtime Racers – Brian Blain for recreating a 1920s garage and driving his 1916 Romano-Sturtevant Special

Group 5B: FIA Manufacturers Championship – David Hagan in his 1967 Porsche 910

Phil Remington Award, Presented by Ford – This is awarded to the mechanic who unselfishly went above and beyond. The trophy bears a “slapper” tool that Phil made from an old Ford leaf spring. It’s illustrative of his innovative skill that is celebrated each year.

Bonhams Award: The Passion Spirt – Presented by Bonhams in a category up to 1500cc

Recipient: Dennis Adair in his 1955 Elva Mk I Sports Racer

Peter Giddings Memorial Award – Sponsored by the Giddings Team, this is in memory of longtime pre-war class participant and a friend to many drivers. It is presented to an individual with a passion for the sport, supportive of fellow competitors, knowledgeable of the cars and is keen on preserving the future of pre-war racing.

Ken Miles Award – Sponsored by HMSA, this award is presented to an individual who has the best representation of a vintage car under 1500cc.

John Lamm Memorial – In recognition of longtime friend of the event since its inception in 1974, this award is presented by Road & Track for the most photographic car.

Motul Most Significant Car – Presented to the Indy Car with the most significant racing history.

Henry Ford Trophy – Presented to the most significant Ford-powered entry

The Rolex Monterey Motorsports Reunion concluded with announcing the world’s most prestigious endurance race—the 24 Hours of Le Mans—will be the featured marque as the kick-off to the French classic’s 100th anniversary in 2023.